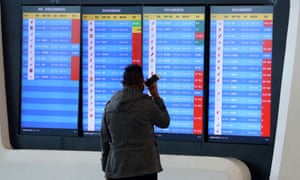 The
Chinese embassy in France has urged its citizens to comply with
airport coronavirus checks after a woman from Wuhan said she had
evaded screenings in order to fly to France and
dine in restaurants there.

The
woman told on social media how she took fever medicine to mask
flu-like symptoms to bypass temperature checks. Wuhan has
temporarily shut down public transport to
contain the deadly virus.

She
wrote: “I had a fever and a cough before I left – I was so
scared. I quickly took some medicine and checked my temperature.
Luckily the temperature was controlled and I had a smooth journey
through the border.”

She
wrote: “I had a fever and a cough before I left – I was so
scared. I quickly took some medicine and checked my temperature.
Luckily the te

Authorities
were alerted to her post after it was criticised by social media
users, and the Chinese embassy in France put a message on its website
on Wednesday evening urging citizens in China to
comply with border checks.

“Our
embassy has received multiple phone calls and emails from Chinese
nationals regarding a woman from Wuhan who posted on social media
about deliberately taking fever medication in order to evade the
airport temperature checks,” it said.

The
embassy said it had contacted the woman and asked her to refer
herself to French emergency services.

Although
French authorities do not yet know when she arrived or what airport
she travelled through, they said they were introducing measures to
separate passengers arriving in the country with a fever and refer
them to emergency health personnel.

More
than 500
cases of the virus,
which is thought to be a new strain of coronavirus, have been
confirmed, and 17 people have died. Cases have been reported in
Macau, Taiwan, Thailand, the US, Japan, and South Korea.