VOLCANO HURLING “LAVA BOMBS” THE SIZE OF CARS, OVER A MILE! EXPLOSIONS SO LOUD, WINDOWS BREAKING ON LA PALMA ISLAND

UPDATED 10:53 AM — The ongoing eruption of the Cumbre Viejo volcano on the island of LaPalma, in the Canary Islands, is getting downright ferocious.

Lava Bombs the size of cars are being hurled upwards of a MILE from the mouth of the volcano, accompanied by explosion sounds so fierce, they’re shattering windows of buildings up to two MILES away!

Pyroclastic flows are being ejected up to 2km from the eruption zone!

Today the local fire department was ordered to withdraw farther from it’s week-long location because the lava bombs are coming out at random and landing everywhere.  The shockwaves from the explosions can harm human beings.

RSAM Going off the chart!

Real-time Seismic-Amplitude Measurement (RSAM) was developed by the USGS to summarize seismic activity during heightened volcanic activity.  Here is the LaPalma RSAM as of 10:40 AM EDT: 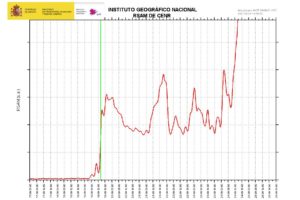 What this RSAM chart shows is that things are getting very, VERY, much worse.

Here is live video of the ongoing eruption and beneath it, recorded video showing large lava bombs being hurled from the volcano:

Authorities are in a major panic / crisis mode, the new vent is releasing lava way more quickly and in a new direction and could well catch up with the old flow FAST. They are now evacuating many more people.

Now a new vent has opened on the side flank of the active cone. Increase in explosive activity shattering windows up to 3km away.

Due to these developments, new evacuations have been ordered for Tajuya and the remaining parts of Tacande that were not already evacuated.