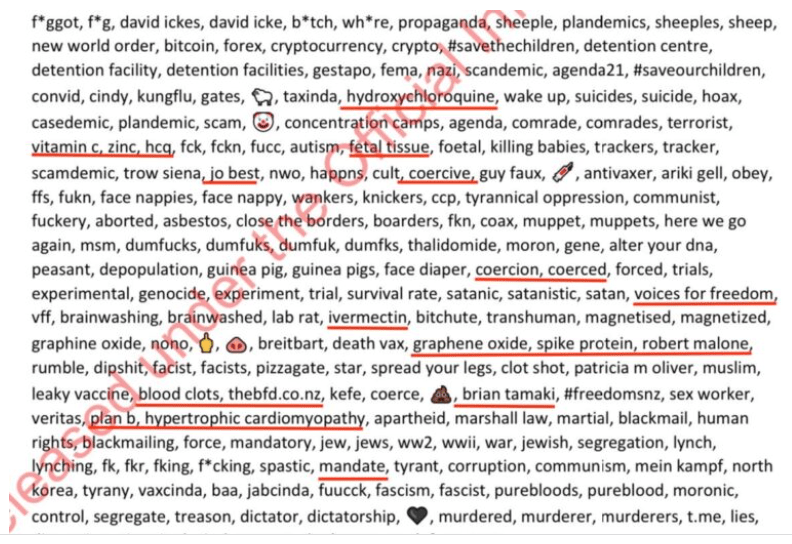 What Do Dr Robert Malone and The BFD Have in Common?

You may remember when we revealed that The BFD and this author, in particular, had discovered that we were under constant surveillance by the ominously named Police Intelligence ‘Scanning and Targeting Team.

We have now discovered, through an Official Information Act request that the tyrant, Jacinda Ardern‘s, own department, the Department of the Prime Minister and Cabinet, which oversees the Covid-19 response have added The BFD and its url to the Government official Covid Facebook page‘s banned words list.

The request asked for:

Dear Department of the Prime Minister and Cabinet,
Covid 19 group

This will need to be in the format of screenshots. A sufficient number of screenshots will be required in order to scroll through the entire list.

To assist your admin staff, this list can be found as follows
[ Page settings ] -> [ General ] -> [ Content moderation ]

Banned words can be useful. We use a banned words list in our moderation to assist the moderators. Mostly the list includes swear words and variations of swear words or names that we don’t want people posting in comments that would expose us to litigation or prosecution.

But this is where it gets interesting. The DPMC has added thebfd.co.nz to the banned words list. Obviously, the Government was afraid that our truth bombs were getting through comments posted to the official Covid-19 Facebook page. So the jackboot of the tyrant, Jacinda Ardern, was brought down on our site. We are now subject to official censorship as well as constant monitoring and surveillance by the burgeoning Police state.

It makes me wonder if the tyrant, Jacinda Ardern, has called her mates at Facebook, Twitter and Google and gotten us shadow banned. I suspect this to be true because our Facebook traffic has suddenly slumped and Google throws up very suspicious results. I sure wouldn’t put it past the tyrant to have made sure we were throttled in some way.

A perusal of the list throws up some other interesting banned words, apart from the usual swear words or sexual perversions.

I found it amusing that muppet and muppets were also banned words. If the tyrant, Jacinda Ardern, were a muppet, she’d obviously be Janice.

On top of that, they are blocking all links from Telegram by banning t.me as a domain name.

It is a point of fact that the Prime Minister’s own department is actively censoring comments on the official Government Covid-19 website, and excluding powerful voices, organisations, media, medical terms, and even beneficial everyday vitamins and minerals, all because those people and things challenge the faltering narrative that vaccines are the only way out of the pandemic.

This is disgraceful censorship and control by the regime. Not only are they using the Police to surveil this website and me in particular but they are also actively suppressing the information we provide to people.

This is why we must continue, to smash down these barriers to the free flow of information. We know we are effective because they seek to silence us.

This regime and their collaborators in the other political parties, along with the corrupted media are actually the enemies of the people. As I said yesterday, the whole edifice and systems need to burn to the ground and we need to start again.

When approached for comment, Brian Tamaki said he wasn’t surprised he was on the list as he is now the Government’s number one political prisoner who has had outrageous limitations placed on his rights and freedoms. He has been essentially on home detention for 63 days, unable to leave his house, prohibited from speaking about things that normal people discuss every day. This is just another limitation of those rights and freedoms.

He added that this is why he is working very hard to ensure there is a political sea change brought to bear on the systems the elites are holding over us all. “They obviously think I’m dangerous, and they’d be right, I am a danger to them.”

The Voices for Freedom spokesperson commented on their organisation being on the banned word list: “We knew the level of Government censorship was bad, but this list really takes the cake. Can you say cake? Or is that on the banned list too? A restriction on naming groups like Voices for Freedom is one thing, but shutting down conversation about mandates and coercion, helpful therapeutics, or mention of factual, scientific terms like ‘spike protein’ and references to blood clots or heart conditions is something else entirely. Are Kiwis really free when the Government interferes with what we can and can’t talk about? Is there any limit to this tyrannical Government’s overreach?”

It appears that there is no limit. That is why we must all fight not just this Labour Government, but all political parties currently sitting in parliament. The elites must learn once again to fear the people and to listen.

We are sick of being dictated to, talked down to, belittled and demeaned. We will teach them a hard lesson. A lesson that they need to heed.

Jacinda Ardern needs to know that New Zealand won’t really be a nice place for her to live in anymore. She should face derision, scorn and jeering wherever she visits. She needs to enjoy the discomfort that she foisted upon all of us. Her time might not be up yet, but the runway left to her is diminishing fast.

We have the power. We do not have to take this censorship, or the scolding, or the belittling. We are strong. We withstood everything the regime threw at us, and still we stand strong. We must fight them, for if we do not fight, then worse is to come.

Give them nothing, for they deserve nothing.