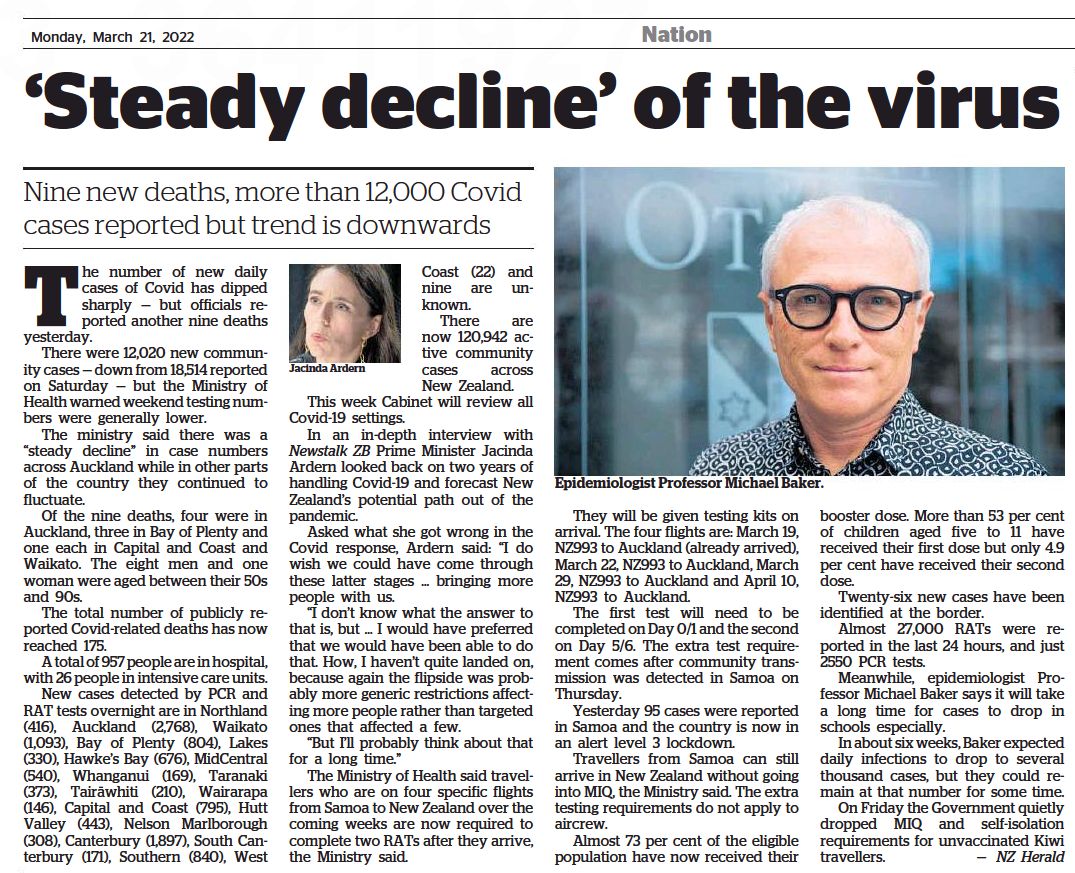 I have been motivated to put energy into writing the following partially because of information that has come my way in the last 24 hours but also as a result of a conversation with my partner, Pam which elicited the question “what next”?

We have been taken up in the last months with Jacinda Adern’s two-tiered society, her vaccine mandate which has seen people’s lives and jobs destroyed as they have been turned into second-class citizens. Now, there are indications that the government may be reconsidering its position and getting rid of at least of the vaccine mandates.

I suspect the government will be feverishly looking at how they are going to back down without looking bad and avoid the suspicion that it it is because of those that occupied parliament for several weeks.

This appeared in the press today:

COVID-19 restrictions look set to be relaxed in the coming weeks as the Omicron outbreak plateaus and the border begins to reopen.

Cabinet is meeting today to review vaccine mandates, vaccine passports and the traffic light system, though any decisions will be announced on Wednesday.

The changes will mark the biggest domestic shake up to Covid-19 restrictions since Omicron arrived on Aotearoa’s shores.

Epidemiologist professor Tony Blakely of Melbourne University said vaccine passes are among the restrictions that are now now excessive, given the spread of the outbreak.

“Many people have already been infected and the need to slow transmission down is less now and whilst the vaccines are good at stopping you going to hospital or preventing death, they’re not as good at stopping any infection.

“People who were triple vaccinated three months ago have now got a 50 percent reduction in the infection risk, it’s not 100 percent, so discriminating or differentiating between the vaccinated and unvaccinated when you haven’t got a pressing epidemic happening at that moment in time I think is disproportionate.”

Yesterday, after weeks of maligning people and describing them with every epithet under the sun stuff.co.nz decided to tell some of the stories:

The Long Road Back: How can New Zealand mend the mandate pain?

Unvaccinated Kiwis locked out of society by vaccine mandates could soon be welcomed into the fold again. Some say it’s going to be a long road back; others don’t want to return.

Elsewhere, there was an article about the position of people with chronic fatigue syndrome and how they were treated by the medical profession.

What we have seen over the last two years is a totally fake narrative that speaks to a “case-demic” or even a “scamdemic“, based on faulty PCR testing that could diagnose people with covid-19 when they had nothing of the sorts. During the first lockdown in New Zealand 27 people died WITH covid-19, mostly elderly people who were going to die anyway of other chronic conditions or, in one case, someone who died of gunshot wounds but had been diagnosed with covid-19.

This was used to allow Jacinda Adern to roll out her compulsory vaccination program whereby according to government figures 90 – something % of the population has had at least one jab with many having taken their first booster shots.   The latest statistics say that 184 people have died with covid as opposed to the 27 previously, which stood right from May, 2020 right through to December, 2021 when numbers started to rise as can be seen in this graph. 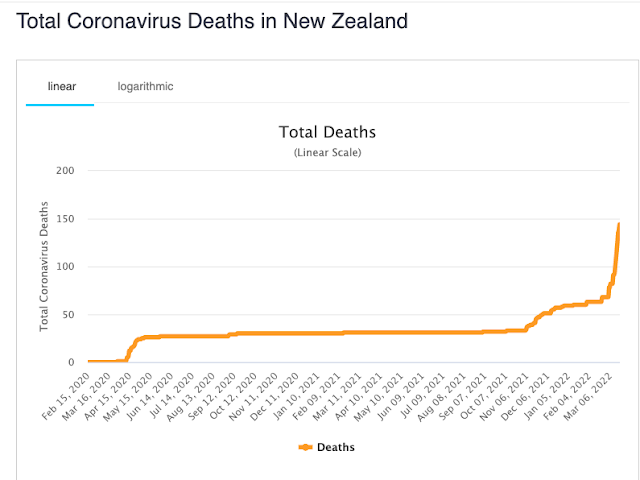 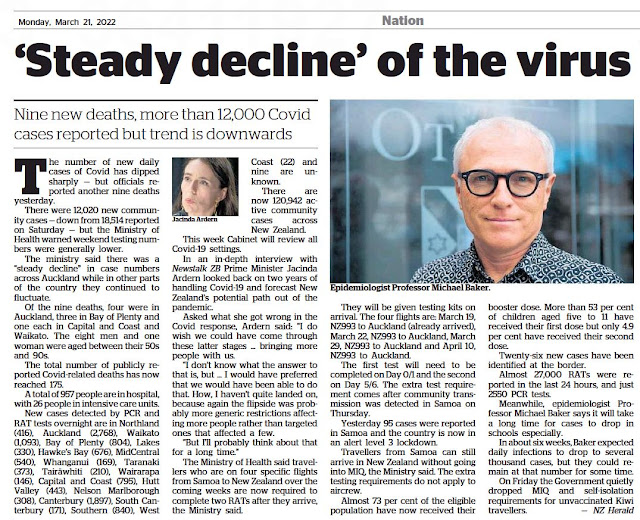 So, for most of the period we are being told to panic – to stay apart from others, wear a mask and avoid the unvaccinated like the plague. That,I suspect, was to corral the population and get them to take the death shot.
Now, that we really do have a problem on our hands we are having the prospect of having the draconian regulations relaxed so the nation can get back to normal.
Except that there will be no normal.
We have been fed lies throughout and now we have more lies.
We have this from the Thailand Medical News, which is not a friend of the mainstream narrative but is flying a red flag.

It does tend to indicate that the warnings of Geert vanden Bossche about carrying out mass vaccination during a pandemic and by so doing suppressing natural immunity in individuals and driving the development of many new variants that do not respond to the vaccines.

This is from today:

TOWARDS A VACCINE-INDUCED AIDS

This interview of TruNews’ Rick Wiles with lawyer Todd Calender on the development of vaccine-induced AIDS says it all –
You can hear the full interview HERE
And this interview makes it quite clear just what is in the jabs and what they can do.
A PANDEMIC OF THE VAXXED

It would not be an exaggeration to say that we are not being told any of this. To corral the population and get them to take the jab Jacinda’s government and her compliant media had to frighten the bejeezus out of people and get them to fear and avoid the unvaxxed.

We are told this is a “pandemic of the unvaxxed”.  A small number of people who have refused to take the jab are, we are being told, responsible for the whole thing.

However, just a little basic research and examination of the OFFICIAL data can reveal the truth.  All you have to do is to turn off the TV, avoid the newspapers and Jacinda’s press conferences.

I have written the following a few weeks ago.

Official NZ Ministry of Health Data suggests the Fully Vaccinated are developing Acquired Immunodeficiency Syndrome; & the M.o.H is trying to hide it

There is some excellent work that has been done – and I am thinking of Guy Hatchard’s excellent statistical analysis and the spreadsheet from MSDOS and the Health Forum NZ showing that at least 300 people have died from taking the jab.

However, it has not attracted the attention it should have and we have to rely on the excellent analysis of people 12 thousand miles away.

I would love to be the one who can crunch the numbers and monitor the trends. I am not, however, capable of doing that – I am not a statistician – so I have to limit myself to what others have done.

WHAT DO THE STATISTICS SHOW?

Worldometer is an excellent source of statistics that show how the numbers of cases have gone up. 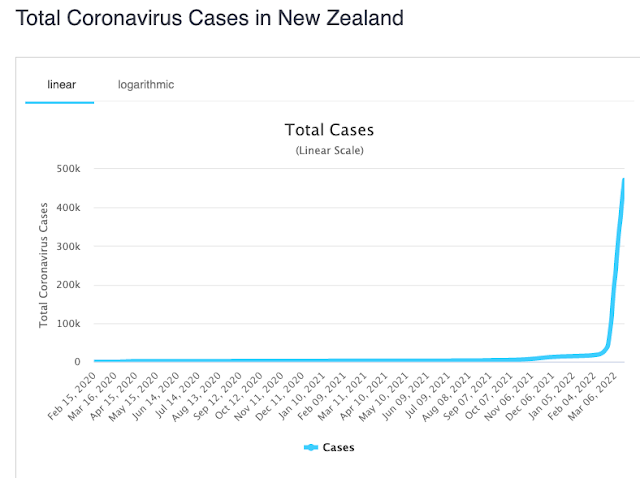 One could possibly quibble with the case numbers, however the statistics for the number of dead are far more indicative

Although the vaccine rollout started earlier, deaths started to rise in November, 2021 and sharply in March.

This graph takes figures provided by the NZ Ministry of Health to show the number of cases by vaccine status.

By far the majority of cases are vaccinated. 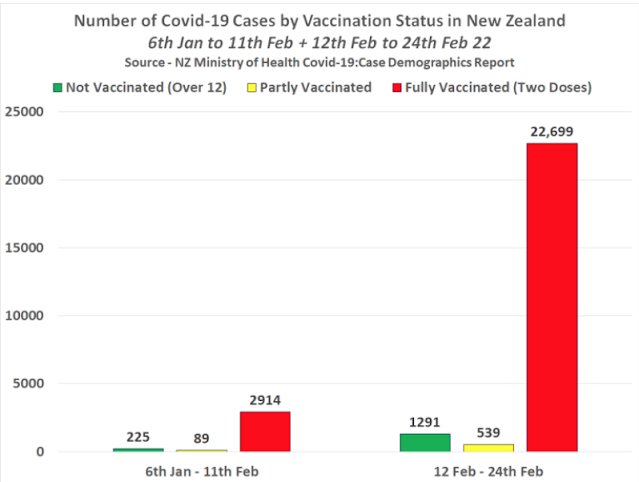 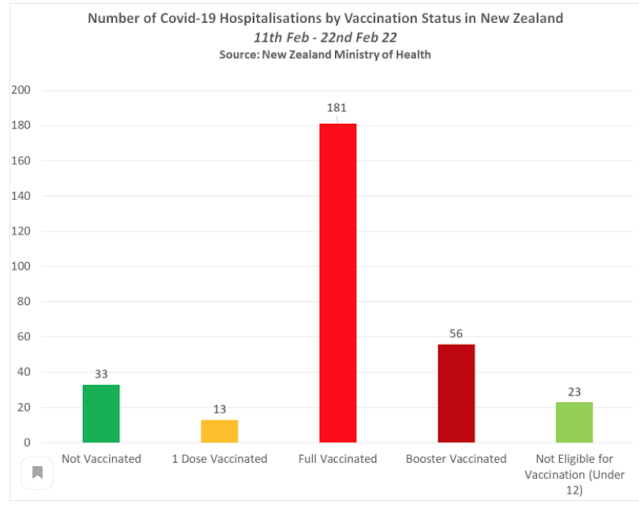 This graph shows that the vast majority of those hospitalised are vaccinated.

I have been told that this natural because the vaccinated represent the majority of the population.

If what Jacinda says is even remotely true, that the vaccines are “safe and effective” and the vaccinated are “protected” against the disease we would expect cases of hospitalisation from covid-19 amongst the vaccinated should be relatively rare. 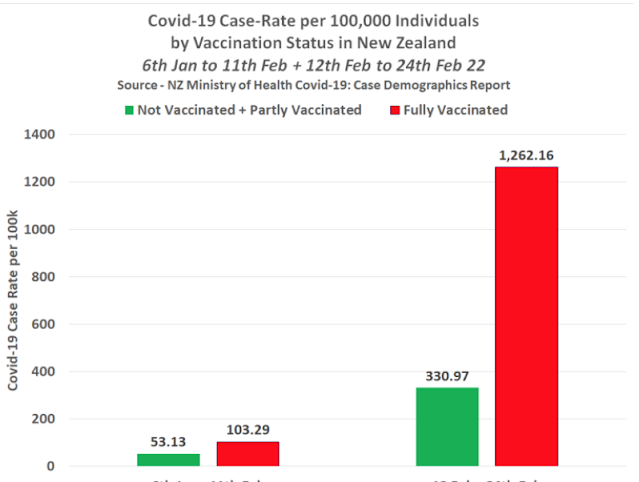 These conclusions have been derived from official statistics. I would fully expect that officials in New Zealand will change the way of collecting data to make it easy to hide what the true situation is.

This has already happened in the UK.

Just as I predicted EXACTLY A MONTH AGO

Official Government of Canada data is truly terrifying; it suggests the Triple Vaccinated have developed AIDS & are now 5.1x more likely to die of Covid-19 than the Unvaccinated

These figures therefore suggest that both the double and triple vaccinated population in Canada have now had so much damage caused to their immune systems by the Covid-19 injections that they have now developed Acquired Immunodeficiency Syndrome.

I do not have a crystal ball so I cannot predict what battles lie ahead for those who are fighting the government mandates but quite possibly the situation might change with a relaxation of at least some of the draconian measures, however I would say that it is imperative that people support and look after each other as they have been.

The vast majority who have buckled to the government propaganda and had at least one jab (probably more, including the booster) are, I would say from the evidence, marked for death or severe ill health in the coming months and years

One of the greatest crimes of authorities across the world (and no less in New Zealand) has been the refusal to allow people to be treated with medicines that have been shown to work well.

It is the first seven days that are the most important for recovery. If people are able to use the protocols that are out there there is little reason that the unvaccinated can’t recover with relative ease.

Not so with the vaxxed.

Not only have they been injected with an experimental mRNA virus that is destroying people’s immune systems, but they are the ones who are denied effective treatments until it is too late.

In this context it is not difficult to understand the phenomenon of “long-covid”.

One reason why I am talking about this is that after the sacking of Freedom Village at NZ’s parliament a good number of people I personally know succumbed to illness which they themselves have described as covid-19.

It was serious for my friends and no walk in the park so I am no longer able to embrace any suggestions that the virus is not real – at least not now.

We are living in a strange situation whereas previously we were told to socially distance and wear masks and that was totally nonsensical.

However, thanks to mass vaccination we have a situation where wearing a mask (for the minimal protection they offer) and keeping one’s distance is not altogether a silly thing – from the vaccinated at least.

Such are the times we are living in.

P.S. I realise the limitations of what I have tried to do here so would appreciate it if people can share this as widely as possibly as well as, most important, provide some positive criticism and perhaps a corrective.

2 thoughts on “Towards a vaccine-induced AIDS epidemic in New Zealand?”