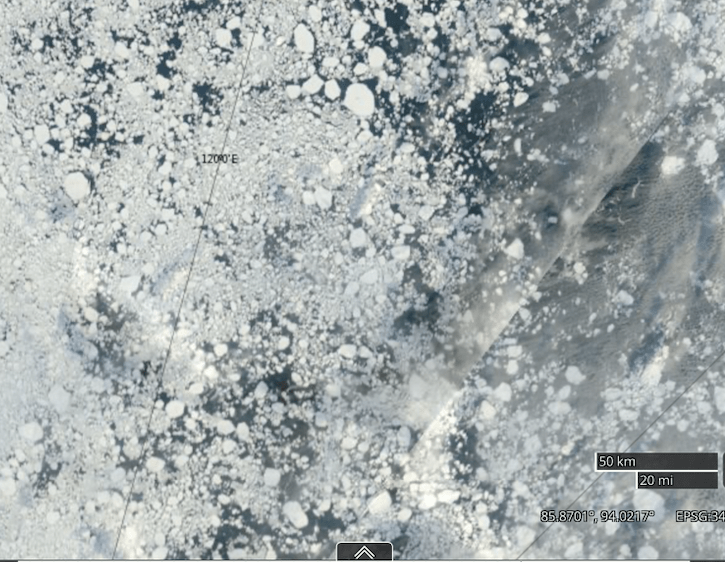 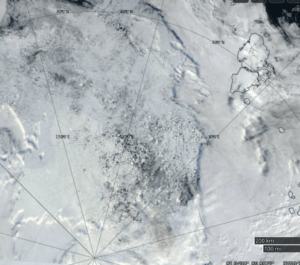 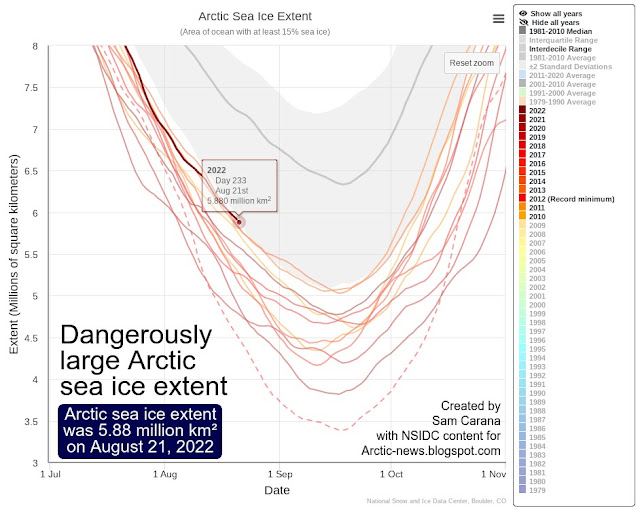 At first glance, one might think that this relatively large extent was a sign of healthy sea ice. After all, the larger the sea ice, the more sunlight gets reflected back into space. At the same time, however, the situation is very dangerous, as there is a growing risk that large eruptions of methane will occur from the seafloor of the Arctic Ocean.

Why is the situation so dangerous? There are many contributors to the danger, three of them are:
1. Sea ice acts as a seal 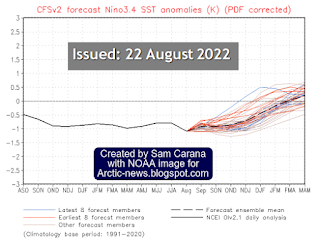 Furthermore, we’re currently in the depth of a persistent La Niña (NOAA image on the right), and the associated lower air temperatures further contribute to a relatively larger extent of the sea ice.
More extensive sea ice in turn makes it harder for ocean heat to be transferred to the atmosphere, thus instead raising the temperature of the water of the Arctic Ocean.
Sea ice acts as a seal that impedes transfer of ocean heat from the Arctic Ocean to the atmosphere.

The larger the sea ice is in extent, the less ocean heat can be transferred from the Arctic Ocean to the atmosphere, which means that more heat will remain in the Arctic Ocean.
2. Lid on North Atlantic
Ocean stratification is increasing globally, as ocean warming is stronger for upper layers versus the deep ocean. Stratification increased from 1960 to 2018 by 5.3% for the upper 2000m and by as much as 18% for the upper 150m, while salinity changes also play an important role locally, a 2020 study finds.

Deformation of the Jet Stream can a times strongly increase evaporation over the North Atlantic with more precipitation further down the path of the Atlantic meridional overturning circulation (AMOC).

Deformation of the Jet Stream can also increase runoff from land (including from melting glaciers).

In both these cases, this can contribute to the formation and growth of a relatively cold, freshwater lid at the surface of the North Atlantic.

This lid on the North Atlantic reduces transfer of ocean heat to the atmosphere and enables large amounts of salty, warm water to enter the Arctic Ocean, diving under the sea ice.
This lid also increases the risk of a sudden, large influx of hot, salty water. Slowdown of AMOC causes ocean heat to accumulate, while more warm water travels underneath this lid (instead of at the sea surface) toward the Arctic Ocean. As the Jet Stream gets more deformed, strong winds along the path of AMOC can at times speed up the flow of water that travels underneath this cold freshwater lid over the North Atlantic, suddenly pushing large amounts of salty, warm water into the Arctic Ocean.
3. Latent heat buffer loss

The image illustrates that Arctic sea ice is currently larger in extent than it was in 2012 and 2014 at this time of year, while there has been a dramatic reduction in thickness of the sea ice over time.

Sea ice acts as a buffer that absorbs heat, while keeping the temperature at zero degrees Celsius. As long as there is sea ice in the water, this sea ice will keep absorbing heat, so the temperature doesn’t rise at the sea surface. The amount of energy absorbed by melting ice is as much as it takes to heat an equivalent mass of water from zero to 80°C.

This ice has meanwhile all but disappeared, so without this latent heat buffer further incoming heat must go elsewhere, i.e. the heat will further raise the temperature of the water of the Arctic Ocean.

Very high methane levels
The Copernicus image below shows a forecast of high levels of methane over the Arctic on August 28, 2022 18:00 UTC at 500 hPa. 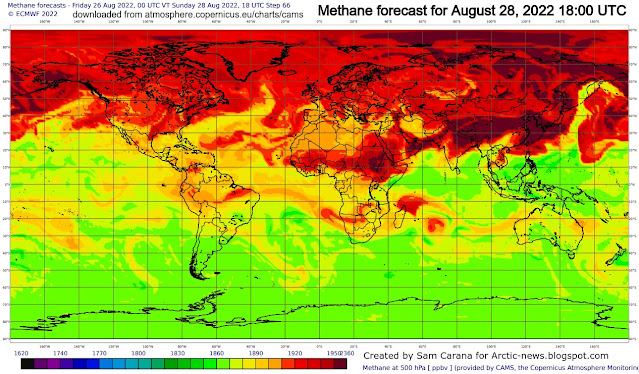 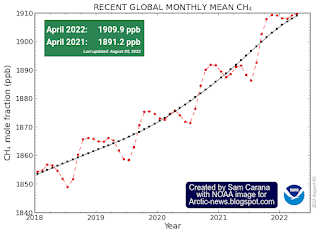 Methane levels are already at record high and growth is accelerating, even without an extra burst of seafloor methane. The NOAA record shows that methane grew by 18.31 ppb in 2021, the highest annual growth on record.

The most recent monthly NOAA data are for the globally averaged marine surface mean for April 2022, which was 1909.9 ppb. This is 18.7 ppb higher than April 2021, as illustrated by the image on the right, from an earlier post. 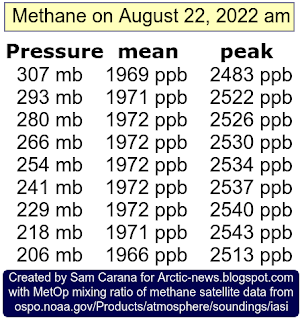 NOAA’s data are for marine surface measurements. More methane tends to accumulate at higher altitudes, as illustrated by the two data images on the right.

The image underneath on the right shows a methane peak of 2622 ppb (marked by the red oval), recorded by the N20 satellite on August 20, 2022 am at 399.1 mb. High methane levels are visible north of Siberia, indicating that much of the methane may originate in the Arctic.

Another N20 satellite image is added underneath showing high methane concentrations over the Arctic, also on August 20, 2022 am, but at 695.1 mb, which is much closer to sea level. This confirms that much of the methane may have originated in the Arctic. 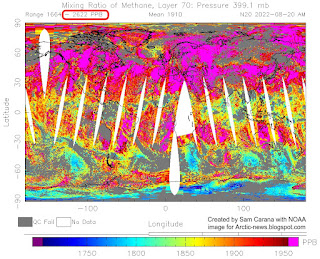 An image is added underneath from another satellite, the MetOp satellite, also showing high methane concentrations over the Arctic, also on August 20, 2022 am, this time at 586 mb, further confirming that much of the methane may have originated in the Arctic. 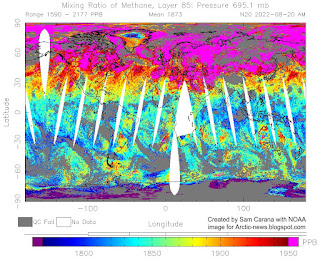 The average monthly CO₂ at Mauna Loa, Hawaii, was 420.99 ppm both in May and in June 2022. As illustrated by the image on the right, average daily CO₂ hasn’t been below 416 ppm in July and August 2022, while some hourly measurements were around 425 ppm CO₂. 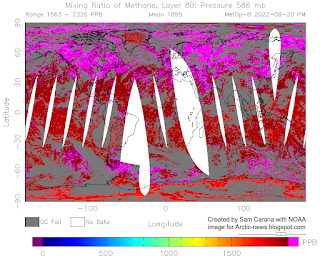 In other words, a large eruption of methane from the seafloor of the Arctic Ocean could abruptly cause the joint CO₂e of just two greenhouse gases, i.e. methane and CO₂, to cross the 1200 ppm clouds tipping point globally and trigger a further 8°C global temperature rise, due to the clouds feedback alone. When adding further forcers, a huge temperature rise could be triggered even with far less methane erupting from the seafloor. 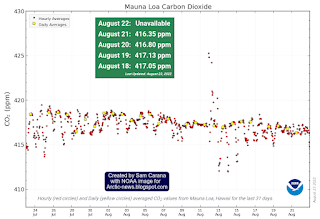 Conclusion
In conclusion, there is a growing danger that methane will erupt from the seafloor of the Arctic Ocean and cause a dramatic rise in temperature.

Even without such eruption of methane from the seafloor of the Arctic Ocean, temperatures look set to rise strongly soon, as we move into an El Niño and face a peak in sunspots. 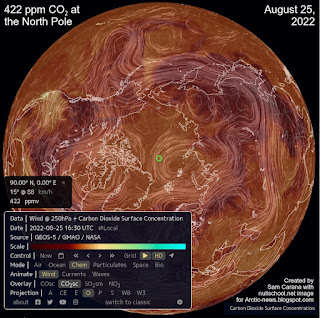 Either way, the resulting temperature rise could drive humans extinct as early as in 2025 with temperatures continuing to skyrocket in 2026.

This makes it in many respects rather futile to speculate about what will happen beyond 2026. At the same time, the right thing to do now is to help avoid the worst things from happening, through comprehensive and effective action as described in the Climate Plan.

• Arctic sea ice June 2022 – why the situation is so dangerous
https://arctic-news.blogspot.com/2022/06/arctic-sea-ice-june-2022-why-situation-is-so-dangerous.html

• Feedbacks in the Arctic
https://arctic-news.blogspot.com/p/feedbacks.html

• How much time is there left to act?
https://arctic-news.blogspot.com/p/how-much-time-is-there-left-to-act.html