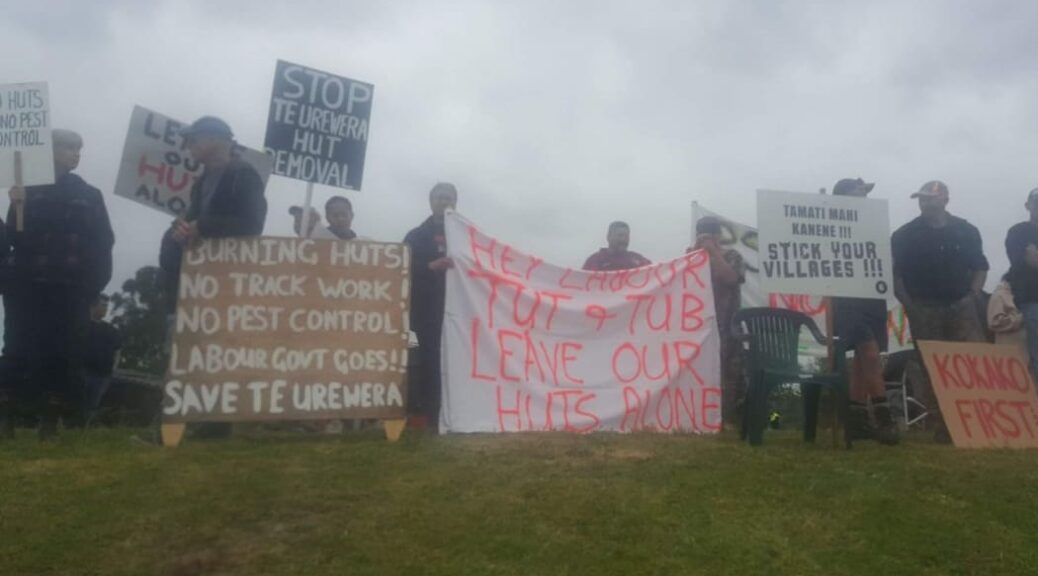 About 200 people gathered in Tāneatua this morning to protest the removal of Te Urewera Department of Conservation backcountry huts. Photo: Supplied / John Brown

Furore has erupted near the remote, rugged country of Te Urewera, where work is now underway to strip, dismantle and burn down backcountry Department of Conservation huts.

At least 15 are gone and another 33 are set to be removed by December, set to be replaced with a “new kind of visitor experience”.

Hikers and hunters claim they have been dismissed, without any consultation, details or timeframes.

About 200 people gathered in nearby Tāneatua this morning – banners and signs in hand – for a protest organised by local farmer John Brown.

“We’ve got Land Search and Rescue. We’ve got ex-DOC. We’ve got people from the Lions. Contractors, helicopter operators. And local Pākehā. We all use those huts. We don’t see the logic,” he said.

For Whakatāne man Ray Walker, the hut removal meant an abrupt end to the tramping network his family had enjoyed for decades.

“I’ve come, spent hundreds and hundreds of nights in these huts. They become, really, part of your lifestyle. Our families have basically brought our kids up there. It’s actually part of the culture of this area, Te Urewera,” he said.

“This has existed since the mid-60s. So now TUT [Te Uru Taumatua] are wanting to pull these huts out or destroy them, and it’s going to rip the heart and soul out of Te Urewera from a manuhiri, or visitors, perspective.”

Te Uru Taumatua is the operational entity of iwi Ngāi Tūhoe, which took over the day-to-day management of Te Urewera from DOC in 2014.

A note on the DOC website said TUT was working to develop a new kind of visitor experience “that is rich with culture, appreciation of Papatūānuku, and care for nature and people.”

TUT had previously claimed the huts were worn, leaking and in need of replacement – some even infested by rats.

But John Brown argued the ones he had recently visited were leak-free and “structurally sound.”

Waimana man Robert Fleming said if the iwi could spare the resources to bowl them, it could have kept up the maintenance.

“It’s PR. I mean, you have rats in the huts at times but that’s very easily controlled. I visited two of the huts in the last month and they’re not rat infested by any means.”

Exactly what will be built to replace the huts, and when, remains unclear.

A post on a Facebook page run by Ngāi Tūhoe this month suggested new accommodation could be built in “2 – 3 years” but said “things like pandemics, wars and inflation make you shy to commit to timeframes.”

“Your association to these places are acknowledged and respected, but that enjoyment has often come as a cost to others,” it said.

“These are long considered decisions. If you want to discuss any of this, our bushcrews and our Tribals are very prepared to boil the jug and korero with you on both decommissioning and redesign.”

But until new accommodation is built, Brown feared health and safety of hikers and hunters could be compromised.

“I’ve heard stories, just today, this morning, three different stories of different people who actually had their lives saved because those huts were there. [They’ve] been lost and gone on a trek ill-prepared. But if the huts weren’t there they’d probably be dead,” he said.

Ray Walker felt locals should have been consulted about the hut removal before it took place.

“There’s no plan, no point of discussion. So really, at this point, what’s required is to stop this thing happening, sit around the table and come up with a plan – and then add to that plan and just try and come up with a bit of middle ground.”

Conservationist and former DOC ranger Pete Shaw was also appalled that a deal seemed to have been done “behind closed doors.”

The huts were “really important to people”, he said.

“For some people they hold spiritual significance. They’re places where they’ve worked. Places they’ve loved. Places where lots of different events have happened … and they’re open to everybody. They’re almost like a little church, you know, and so to see them treated so abysmally is just shocking. Absolutely shocking.”

The repercussions went beyond Te Urewera and it was a lesson for how land was managed in future, Shaw said.

“The system has failed, horribly, for the people that use Te Urewera, from outside and for Tūhoe themselves. There were a lot of Tūhoe people at the protest today saying ‘we don’t want our huts to go’.

“So I think the key message from this protest is actually the bigger picture. It’s that the model that’s being used for co-governance in Te Urewera is broken. It’s not working, it’s failed the species, it’s failed the access and by taking the huts out you’re disconnecting Tūhoe.”

DOC referred all RNZ’s questions to Ngāi Tūhoe today, who did not respond to requests for comment.