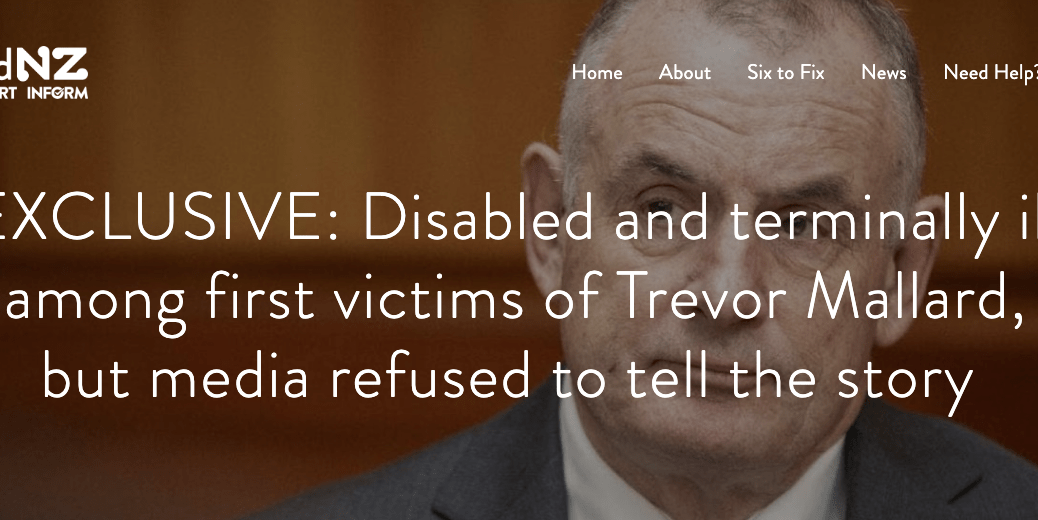 Check through the archives and you will find that there is no one more in favour of voluntary euthanasia.

And I mean VOLUNTARY – if people make their own decisions and take responsibility for their decision.

I was never in favour of any top-down system coming from governments, especially the fascism we are living through.

MOH SAYS KIWIS WITH COVID-19 CAN BE ELIGIBLE FOR EUTHANASIA

EXCLUSIVE: Disabled and terminally ill among first victims of Trevor Mallard, but media refused to tell the story

By Henoch Kloosterboer, Editor of The Defender.

With the welcome departure of former Speaker of the House Trevor Mallard, there’s been a lot of talk about the public scandals that have plagued his tenure.

Everything from the highly questionable use of trespass notices, to dubious accusations against Parliamentary staffers, to his turning loudspeakers and sprinkler systems on protesting citizens.

There is one very serious incident, however, that you probably aren’t aware of – that #DefendNZ were one of the first victims of Trevor Mallard’s authoritarian excesses at Parliament.

Despite our best efforts at the time, the media refused to report what had happened to us, and so our story has remained largely untold to the public until now.

Back in May 2019, the second reading of the then End of Life Choice Bill, attempting to legalise assisted suicide and euthanasia, was due to take place in Parliament.

In preparation for this, we collaborated with a sitting MP to host a special event at Parliament which involved our #DefendNZ heroes – courageous Kiwis with terminal illnesses and disabilities who became public ambassadors to highlight the harms the Bill would bring about.

The day after this event, when the second reading of the Bill was thought to be highly likely, we were invited back to Parliament by a sitting MP. This is when we came face-to-face with the unforgiving wrath of Trevor Mallard.

Our small party of mainly disabled and terminally ill New Zealanders were not there to protest, disrupt or engage in illegal activity. We were simply there to attend pre-arranged meetings with MPs, observe proceedings from the public galleries of Parliament, and be silent advocates for vulnerable Kiwis.

We faithfully adhered to the rules which had been stipulated to us, including the fact that we were not to wear our #DefendNZ shirts in the public gallery. (The shirts simply said, “Vote no to assisted suicide”)

Over the course of the day, we began to sense that even our silent presence was becoming too challenging for the pro-euthanasia MPs, and around lunchtime, we discovered just how cruel those in power can be to a dissenting presence.

Without any prior warning, a Parliamentary security guard began rudely demanding that we leave the Parliament building immediately under the urgent order of Trevor Mallard.

None of that mattered to Trevor Mallard, who quickly appeared in person to reinforce his eviction of a small and peaceful group of disabled and terminally ill New Zealand citizens.

I watched stunned, as Trevor Mallard stood over a woman with terminal brain cancer, and berated her with a raised voice, threatening her with a trespass notice as she sat in her wheelchair, made powerless and with eyes watering.

Here’s how disability advocate, and Anglican priest John Fox, who was one of those evicted, described the incident at the time:

“We were wearing our ‘Vote No to Assisted Suicide’ t-shirts (or some of us were) in the Parliamentary Cafe and the hallways: (we knew we couldn’t wear them in the Public Gallery and we didn’t). We were clustered around the lift because there are only two disabled lifts in Parliament; they’re tiny, and we had a bunch of wheelchairs… Next thing you know, two pro-assisted-dying Ministers are complaining that we are there and accosting people, (which we didn’t, we spoke to the people who spoke to us, or people we knew) so security arrived. They shouted at us (really), they were extremely aggressive, and refused to tell us what we did wrong, then they got increasingly demanding and aggressive, a couple of us on meds got upset, and demanded to know why he was being so aggressive and confrontational, and the wonderful [terminally ill] Vicki Walsh demanded to know why he was being so angry.

Then the Speaker [Trevor Mallard] appeared and said we’re not allowed political t-shirts, and that we shouldn’t have been in the Cafe. We said we were invited specially, followed all the instructions we were given (we did, I was there, we were extremely careful to be respectful), the security man had another go at us because Ministers have complained, we asked why, and he explained to us [later, after we were escorted] outside that the rules have changed because of March 15 [Christchurch Mosque attack] and no one told us. We said that wasn’t our fault, I explained to him the physical logistics of negotiating the damned difficult building and that we did nothing wrong, he said he didn’t really care.

In essence, the other team got sick of looking at us.”

After the incident, Vicki Walsh (RIP), contacted her local MP to alert him to what had happened. She received this reply:

“I have now heard the whole story and am a little sorry I wasn’t there with you as I think you were done an injustice by our speaker.”

In the immediate aftermath of our unjustified eviction from Parliament under threat of trespass notice by Trevor Mallard, we felt we had to alert the public to what had happened.

The forceful removal of peaceful and non-disruptive New Zealand citizens from our nation’s Parliamentary buildings was too serious an incident to stay silent about.

As we were being forcefully removed by no less than three security guards, I immediately made phone contact with journalists from 1NEWS and the NZ Herald, both of whom indicated that the Parliamentary press gallery was aware that something serious had just transpired in Parliament.

They also told me that they were keen to come down and interview us, but they would just need to clear it with their editors first.

An hour later, after hearing nothing further from either journalist, I contacted them for a second time. It was then that I was told that their editors had refused them permission to report on the incident.

I was dumbfounded, as I can’t ever recall any other incident involving peaceful advocates, who were at Parliament by invitation, having been then threatened with trespass notices and evicted by the Speaker of the House.

To say that this wasn’t something even mildly newsworthy beggars all belief.

At that stage, we chose not to take the issue any further because we didn’t want to create a sideshow, nor undermine our profoundly important advocacy work for vulnerable New Zealanders.

Don’t forget, the End of Life Choice Bill was still alive in Parliament at that stage, and we did not want to take any course of action that would jeopardise the possibility of a good outcome for those Kiwis the Bill would harm if it became law.

Later that same year, the Francis Review, which was an investigation into bullying at Parliament, was published. Among other things, it found the following:

“Bullying & harassment are systemic [at Parliament].”
“Unacceptable conduct is too often tolerated or normalised.”
“There is low accountability, particularly for Members, who face few sanctions for harmful behaviour.”
“The identities of many accused are an open secret, and there are alleged serial offenders.”

We can definitely attest to having been targeted by that toxic culture, and it wasn’t good.

You might be wondering why we’ve chosen to speak publicly about our story now.

No, it’s not simply the fact that Trevor Mallard is departing, and it’s not an attempt to re-litigate old grievances.

Instead, the important issue here is that of the public accountability of those who are elected to serve us in public office.

This was just one of many incidents where the media performance during the passage of the assisted suicide and euthanasia Bill was highly questionable.

One of the untold stories of that whole period was the way in which some journalists and media outlets went from being unbiased observers of the parliamentary process, to biased advocates and cheerleaders of a Bill.

This might have suited the supporters of legalised euthanasia, but it resulted in an extremely bad outcome for the people of New Zealand.

Even if you are pro-assisted suicide, the final End of Life Choice Act we ended up with has some very serious flaws in it. This means that vulnerable New Zealanders are now at greater risk of a wrongful death than they were before this Act was passed.

These flaws could, and more than likely would, have been addressed if the media had maintained a proper standard of journalistic ethics and ensured a greater degree of accountability.

The media’s decision to turn a blind eye to our unjust treatment at the hands of Speaker Mallard was just one example of many questionable media actions during that period.

Trevor Mallard may be departing Parliament, but the issues that allowed him to operate with impunity for many years while in office, culminating in the incidents of the last 12 months, remain unaddressed.

This is precisely why the public accountability aspect of the work we are engaged in at #DefendNZ is so fundamentally important.

If we can’t rely on the fourth estate to ensure a level playing field for vulnerable Kiwis, then it’s up to us to do our best to be a beacon of light, shining the uncomfortable light of accountability at the times and places where it is most needed.