Between supply chain issues and five finger discounts, no wonder the shelves are empty.

Shortages at grocery stores is just the beginning.

There’s going to be shortages of everything, everywhere. There’s even a shortage of cat food .

The supply chains are disrupted because of the virus. People are calling in sick from work . People are being fired because they didn’t get the vaccine . It’s going to get a hell of a lot worse before it ever starts to get better.

The biggest disaster of COVID has not been the temporary disruptions in business inventories. The disaster has been a massive disruption in human lives worldwide, which is continuing.

The middle class was hollowed out .

The impact of watching hardworking people lose their jobs turned a big chunk of a generation into economic slackers. I’m beginning to think this will become a generalized strike of sorts. Some will just work at working the system.

Get whatever bennies you can from the state, hit the food banks regularly. Maybe do a couple of cash jobs now and then under the table. Forget the labor “shortage” because no one wants to work, they just want stimmies. Businesses can’t find workers but the US unemployment rate is 3.9%? Who is the liar? Businesses that can allow remote workers should be thankful they can hire any workers at all. Same for businesses whose workers have to show up in person.

I do believe the trucking industry has allocated the resources to deliver supplies to the cities and surrounding suburbs. If and when this delivery stops then it will be 3 missed meals and the cities will be in flames.

The truckers are the key to this whole thing. The president may attempt to nationalize the trucking industry when all hell is breaking loose but it will be a largely futile gesture. Things are close.

The government will start to pay bonuses to people down south to come here. They have to collapse the current system before they move us toward the totalitarian beast hellscape where we all eat 3D printed meat and bugs. All they need is cute buzzwords and marketing gimmicks and the sheeple will beg for their own enslavement.

Welcome back to The Atlantis Report. I saw a sign posted” The whole world is short staffed. Be kind to those that showed up”.

Essential workers working through this pandemic are heroes. What happened to treating them as such? Where are the signs that used to be on every corner? What happened to coming together to support them?

My fellow Americans that act like it is business as usual out there are dragging this country to a new low.

Selfish and spoiled behavior is the new norm.

All over the globe, cost cutting is done in the manufacturing sector mainly because of corporate greed in terms of getting huge profits at the cost of quality thereby resulting in avoidable human losses.

In order to grab global orders, these big firms cut costs like anything not only on account of tough competition but also due to political and administrative corruption across the globe. There is another mega problem, which is overlooked.

There is no proper supply and service personnel ratio across the globe. Every firm is interested in selling its product in no time, doesn’t matter whether big or small.

No firm is interested in immediately attending to the needs of the customers there by ignoring the fact that the customer is God. This sort of attitude doesn’t make any sense since they lose customers in no time. Cost cutting in this regard is suicidal for the companies, which they don’t seem to understand.

Employee absenteeism due to workers calling in sick and COVID-19 protocols has hit about 30 per cent at some stores and is continuing to rise, Gary Sands, senior vice-president of public policy with the Canadian Federation of Independent Grocers, said Tuesday.

If the situation worsens, some grocery stores won’t be able to stay open — threatening food security in rural and remote areas that rely on a sole independent grocer, Sands said.

“If we have to keep sending people home, at a certain point stores are not going to be able to operate,” he said. “We’re very frustrated with the lack of rapid test kits for grocers.”

“Independent grocers are in a myriad of communities in this country where there is no other grocery store,” Sands said. “If those stores close, you’ve got a food security issue.”

But some supply chain issues could be longer lasting, such as the trucker shortage intensified by the federal government’s new vaccine mandate.

“The issue with the truckers having to be vaccinated is causing some delays, especially with the supply of fruit and vegetables from California,” Sands said. 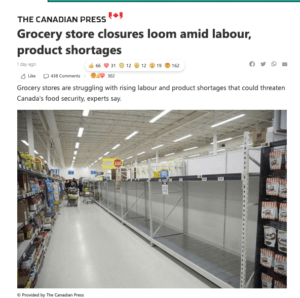 Canadian truck drivers blocked the highway near the U.S.- Manitoba International border to protest the jab mandate that bans all truck drivers getting the jab to cross the Canadian border. The protest occurred on Manitoba Highway 75, connecting to Pembina, North Dakota.

The Royal Canadian Mounted Police Manitoba put out a tweet about the demonstration and the impact it was having on traffic.

“Both northbound and southbound lanes are affected. Please drive with caution if you are in the area and expect delays.” – tweet from RCMP Manitoba.