The western media has made much of alleged satellite pics from Bucha, which purport to show that the bodies that were shown in such pristine condition had been there for weeks 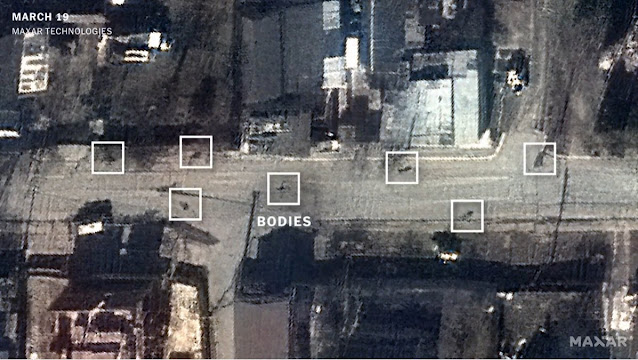 The first question that occurred to me was how bodies that had allegedly been around for such a long time were in such pristine condition – especially for the sensibilities of TV viewers.
Can you imagine how a body would look (as well as smell!) after a few days – even in winter/early spring?!
Comments from Gonzalo Lira:

Bullshit. If the bodies had been lying there for weeks, why were all their clothes pristine? Apart from the decomposition of the bodies, the clothes would’ve been all waterlogged (it has rained/snowed in the last weeks). This is literally manufactured evidence that anyone with even a little bit of commonsense would realize is a complete lie.

The purveyors of The Narrative are getting more desperate. 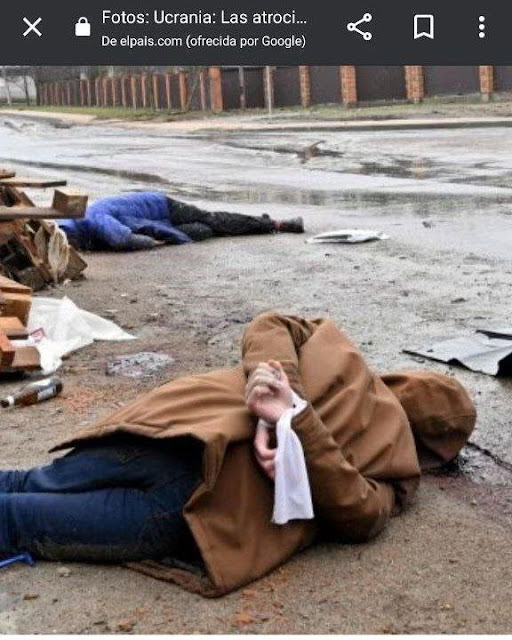 A comment from Telegram:
“When a body spend certain amount of time in the same position the lower parts (the ones the lay lower or against the ground) tend to accumulate the fluids of the body and turn dark, in other instances the skin can be affected if in contact against a very cold surface. Spanish journalist reporting from Donbass Rubén Gisbert has noticed this detail that proves this body in particular was moved. This body was the other way around long enough for this to happen to its fingers”
It was too warm

NamelesZ passed this along — this proves that it is impossible that the bodies at Bucha could’ve been lying outside for weeks without decaying. It was too warm, as the graph proves. The satellite photos are manufactured — it’s an outright lie pushed by the New York Times.

This article has been removed from the internet 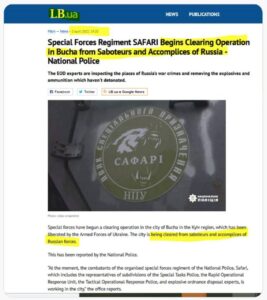 ***
The Ukrainians show reality
This is what one would expect the body of someone who has JUST been shot would look like. I leave it to your imagination what the situation would be after a few days or weeks 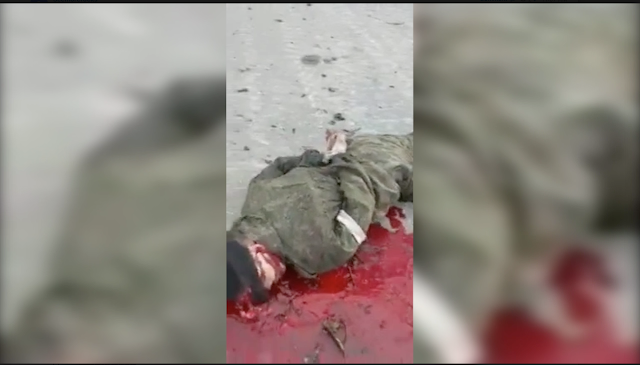 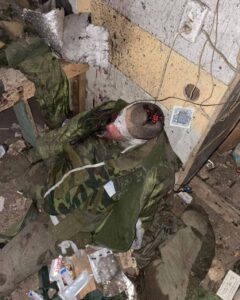 Ukrainian online communities are circulating a photo of a murdered war prisoner. This atrocity is being propagated as a triumph. In the photo one can see that the soldier had white sticky tape put over his eyes, and his head was most likely smashed open as a result of a blow with a blunt instrument.

Everyone has to see such facts of torture of prisoners so that they come to realize what kind of evil the war is being waged against. 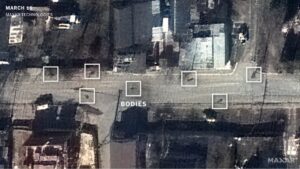 Thanks to the help of our team of OSINT and GEOINT specialists, we were able to accurately determine the time of the photo.

▪️A picture from the NYT allegedly from March 19 shows sandy alluvium after the downpour, which lasted from the 31st to the first.

▪️ The attached comparison from the NYT is based on two images with identical shadow positions. They allegedly compared March 19 and February 28. In fact, they compared February 28 and April 1 – the time and position of the shadows coincide. Original dates of photos according to American time.

▪️ The Maxar website provides information on which satellites have been imaging the Bucha region in recent times. A total of three satellites were involved.

▪️ By checking the angle of the Sun over the horizon, SunCalc found the exact time of the image and the direction of the shadows by searching. 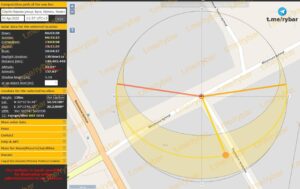 Finally, here is Gonzalo Liro’s video which I saved before he removed it from You Tube before the censors could.