Sometimes, I’m forced to conclude they’re laughing like crazed demons, coming up with foods & names like this.

Did you know the movie, Soylent Green was set in 2022? 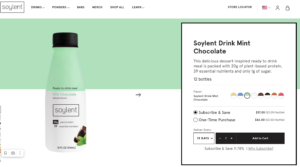 “By 2022, the cumulative effects of overpopulation, pollution and an apparent climate catastrophe have caused severe worldwide shortages of food, water and housing. In New York City alone, there are 40 million people, and only the city’s elite can afford spacious apartments, clean water, and natural food. The homes of the elite are fortified, with private security and bodyguards for their tenants. The poor live in squalor, haul water from communal spigots, and eat highly processed wafers: “Soylent Red,” “Soylent Yellow,” and.. far more flavorful and nutritious, “Soylent Green.

“Soylent Green” is being produced from the remains of the dead and the imprisoned, obtained from heavily guarded waste disposal plants outside the city. The Books further reveal that Simonson’s murder was ordered by his fellow Soylent Corporation board members, who knew Simonson was increasingly troubled by the truth and feared he might disclose it to the public.

Here is some weekend viewing