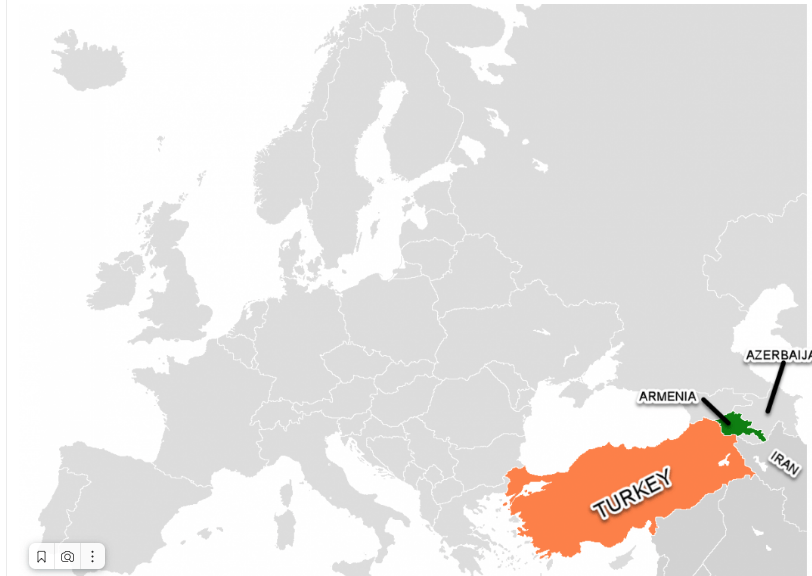 The attack by Azerbaijan against Armenia is already escalating very severely.  That attack commenced on Tuesday.  Yesterday, Iran began mobilizing troops to protect its border with Armenia and told Azerbaijan they will “not tolerate a change in Armenia geography.”  Today, Turkey began moving 45,000 Reserve troops because they support Azerbaijan, and Iran upped the ante by commencing movement of heavy armor to back-up its troops.

Within days, the world could see the outbreak of yet another war; this on the south side of Russia . . . which is precisely what NATO. the EU and the USA want, so as to create havoc and require Russia to fight two wars on two fronts.

This all due to Russia entering Ukraine to de-Nazify it.

Those claiming Ukraine is “not Nazi” and further claiming that “it is only propaganda,” would do well to analyze CNN video from today.

Here is a still image from a CNN report celebrating Ukraine’s counter-offensive which recaptured some territory previously conquered by Russia.

Ukraine has, in fact, gone NAZI.   By aiding and abetting Ukraine, the United States and the European Union are, in fact, NAZI Collaborators. 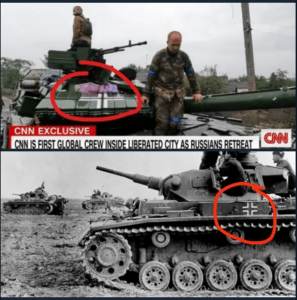 Four months ago, in April 2022, AFTER Russia had entered Ukraine, NATO began making overtures to the countries of Moldova, and Georgia. Below is video of NATO Chief Stoltenberg with the leaders of both those countries:

Here we are, just 5 short months later, in the country of Georgia, the political leadership moved to hold a public referendum on re-starting the war they had with Russia back in 2008, in which Georgia lost a land area known as South Ossetia. The map below shows the area: 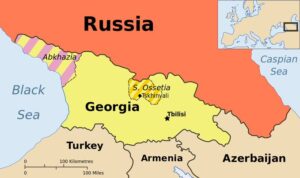 Starting a second front would, it is thought, provide relief to Ukraine by forcing Russia to fight on two fronts.

In addition, REPORTS (unverified) are coming out of Moldova today indicating NATO Armor may be moving into Moldova from Romania.  Awaiting verification of those reports.

We CAN VERIFY that the United States/NATO has mustered a very significant number of HIMARS Multiple Launch Rocket Systems on the Romania border with Moldova.  Video below, taken today, September 16, 2022, shows the HIMARS on the roads inside Romania AT the border of Moldova.

From this position, these HIMARS can completely cross over the territory of Moldova and enter southwestern Ukraine, hitting (Russian) targets there.

We are now clearly seeing actual evidence of World War 3 preparations.  OUR GOVERNMENT in the USA, conspiring with governments in Europe, are literally moving troops and armor into position to fight a war against Russia, which WILL lead to nuclear war.

Russia has told the world from the beginning that if NATO comes against Russia, “it will be a war that no one will win.”  Those were the precise words of Russian President Vladimir Putin.

As most readers know all-to-well, the only “war that no one will win” is a nuclear war.

Yet our government is preparing to take actions that will result in exactly that.

Pelosi to visit Armenia as cease-fire with Azerbaijan holds

The speaker of the U.S. House of Representatives, Nancy Pelosi, said Friday she plans to make a weekend visit to Armenia, where a cease-fire held for a second day after an outburst of fighting with neighboring Azerbaijan that killed more than 200 troops from both sides.

Pelosi told reporters in Berlin she would to travel to Armenia on Saturday with a delegation that includes Rep. Jackie Speier, D-Calif., who is of Armenian descent. Pelosi declined to give further details about the trip, saying that traveling members of the Congress “don’t like to be a target.”

“In any case, it is all about human rights and the respecting the dignity and worth of every person,” she said.