Turkey
opened the border with Greece in a feud over migrants with Syria.

Turkey
Opens the Border With Greece

In
another test of alleged EU’s freedom of movement policy, Turkey
opened its border with Greece.

We are at the #Turkey–#Greece border – Greek border police have been frequently firing pepper/tear gas to hold people back. It got very crowded, many have spent the night here in freezing temperatures. More refugees and migrants are arriving, hoping to cross into Europe. 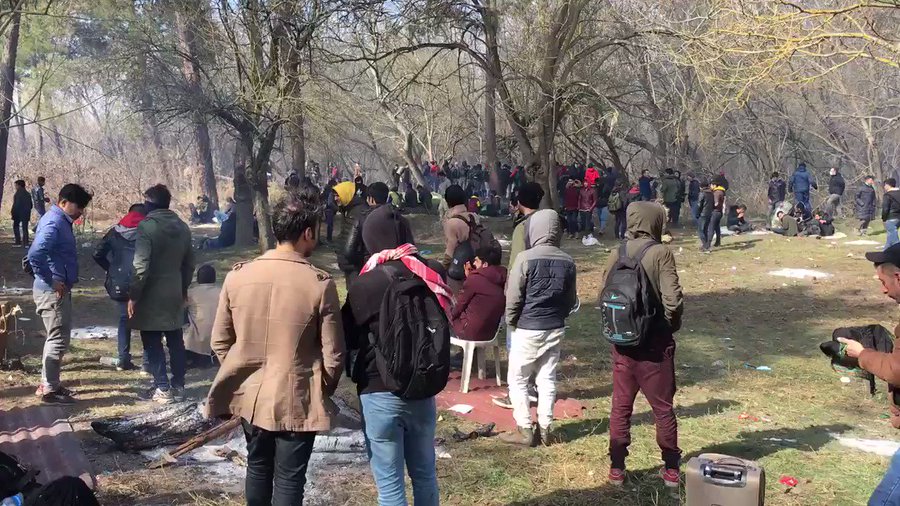 Greece
Responds With Teargas and Denials

Greek
police have clashed with migrants on the Turkish border where as many
as 4,000 people attempted to cross into the EU. On Friday, Ankara
said it would no longer stop migrants from crossing into Greece.

Migrants
and Greek police clashed along the Turkish-Greek border on Saturday,
as Greek authorities claim they blocked 4,000 refugees from
“illegally” entering the EU.

Police
fired tear gas at migrants who amassed at a border crossing in the
Turkish state of Edirne. There were also reports of stones being
hurled by refugees at the officers.

Turkish
President Recep Tayyip Erdogan said that around 18,000 migrants had
crossed Turkey’s border into Europe. The president did not provide
evidence for the number, but said it would rise.

The
possibility of a new wave of migrants has spurred other European
countries to prepare. Austrian Chancellor Sebastian Kurz hinted that
borders could be closed across the Balkans in response to Turkey’s
threat.

However,
Bulgaria denied that there were any problems at its border following
a boost to security on Friday. “There is zero migration at our
border with Turkey,” Bulgarian Prime Minister Boyko Borisov
said.

In
the midst of a coronavirus outbreak in Italy where over 50,000 people
in 11 cities are locked in, this move by Erdogan will put a huge
strain on the EU.

Mercenary Fighters Back To

So-called refugees at the Turkish-Greek border, among them, or even the majority of them, are Afghan, Iraqi, Chechen fighters, Uyghur fighters and the minority are maybe Syrians. Where are they from? From all over Syria’s Idlib province, Turkey and the refugee camps inside Turkey which are a safe place for jihadists from around the world. Also, the remaining surviving terrorists fled with their families from the Syrian Army after being kicked out by Syria and Russia.

President Erdogan is doing it again, playing a double game with both Russia and the EU-US. This time it’s about what he calls refugees. But are they really Syrian refugees? No, of course not, after investigating various videos on different channels, from Russian to Western Media, it’s very clear they are a bunch of “everything”, the majority at the border were masked young man.

In the first 24 hours of the so-called border crisis, 4,000 people were stopped from crossing into Greek territory, according to the Greek government. Footage from the scene shows large crowds of masked men walking and running near the barrier chanting “Turkey, Turkey, Takbir and Allah Akbar“, jihadist usually say these words, especially Takbir.Clouds of tear gas could also be seen, the Greeks are doing what they can to stop another flow of so-called migrants entering their country.

A video clearly shows what is happening in Evros, the border between Turkey and Greece, during the first hours of opening the border from the Turkish side. Groups consisting of dozens or hundreds of desperate immigrants, mainly from Central Asia, led accurately and methodically by Turkish media and mayors of Turkish cities, trying to “break” the border and enter Greek territory, chanting “Allah Akhbar and Takbir”. They fought with Greek soldiers behind the border and with the Greek police or tried to attack the vehicles of the Greek army.

A statement from the Greek Foreign Ministry

WE DO NOT ALLOW TURKISH SPEAKING WITH TURKISH PASSPORTS TO ENTER GREECE. Please, we are not racist. We have many Muslims inside Greece but we have been watching this war for nearly a decade. The Idlib takfiris are extremely dangerous. The Greek islands are at a breaking point, especially Lesbos and Samos.We have prevented more than 4,000 attempts to cross our borders illegally over the past 24 hours. Reinforcements were sent to land and sea borders.

The Syrian Army is in the last stages of liberating Syria‘s Idlib Province. Idlib is the last “bastion“ of jihadists fighters from all around the world, including Europeans, Afghan, Iraqi, Morrocco, Algeria, Tunisia, but especially the Chechen and Uyhgur fighters from the Chinese province of Xinjiang, they are a Turkish speaking minority in China and Turkey and large groups went to Syria, mainly Idlib to conduct Jihad. Turkey has been a destination of choice for so-called Uyghur refugees fleeing China since the 1950s, and is now home to a sizable Uyghur diaspora population (estimates put the number somewhere between 15,000 and 50,000). Many of them joined the Jihad as well and are supported by the Turkish regime, quite an army you can say! The “fresh“ group from China are the most ferocious fighters,they know China will give them the death penalty upon return. Their chance is there, to migrate to Europe, because Turkey is opening the border with Greece.

Chechen, Dagestani, and other foreign fighters from Russia’s North Caucasus region (and Georgia’s Chechen-inhabited Pankisi Gorge) have formed some of the most formidable terrorist groups in Syria’s conflict. This is one of the reasons Russia went to help Syria in combatting the terroristd, they come from former Russian Republics. The most famous and brutal leader was Abu Omar al-Shishani, who was killed in Syria. Also, the connection with the brutal killing in Germany, recently, which was swept under the carpet in Germany, which blamed Russia for killing these terrorists on German soil, was a result of the Syrian conflict. On September 19, 2019, various Western MSM published an investigation into the circumstances around Khangoshvili’s murder. Khangoshvili, an ethnic Chechen in possession of a Georgian passport who was a veteran of the Second Chechen War and most likely fought in Syria under Abu Omar al-Shishani, was murdered on August 23, 2019, in Berlin’s city center. The number of these feared fighters is unknown, estimates are between 1,000 to 5,000 thousand. With the war lost, the surivivors will try to emigrate to Europe and are waiting at the Greek border.

If the EU and NATO will not change their policy towards Turkey and its dangerous President, a new migrant crisis is imminent. But this time, the Syrians are not coming, but the Turkish mercenaries who fought a ferocious war in Syria and killed many Syrian soldiers and Syrian citizens. Also, if the EU doesn’t change its policies towards migrants and most of all towards Syria, Turkey and Russia, Europe will be, once again, a harbor for all kinds of terrorists, facing terror attacks everywhere, and the lost continent might even see a war on its own soil. The conditions are there: a totally ignorant population who are occupied with LGTB matters, plastic and climate, too blind to see the danger coming, and on the other hand, the right-wing extremists, especially in Germany. One spark and you have a full-out explosion.