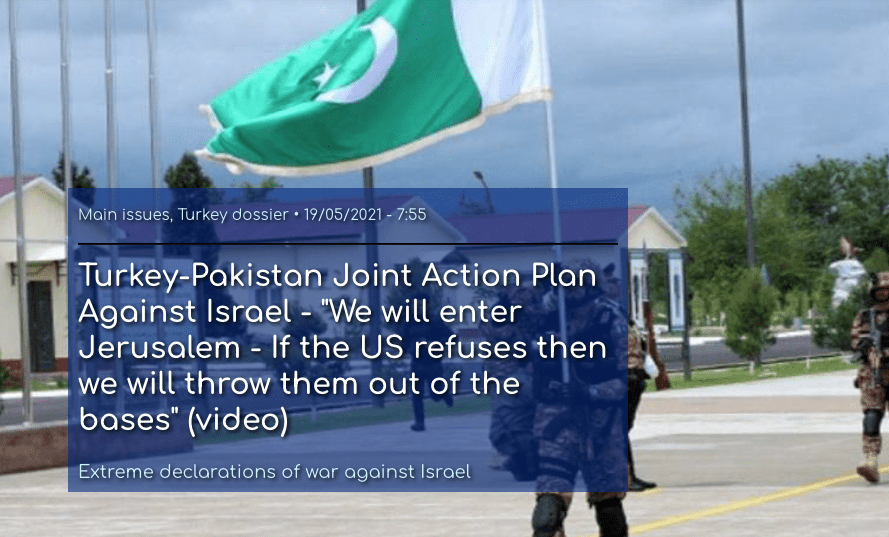 Extreme declarations of war against Israel

Behind the war crimes there is a lot of geopolitics.

You have to be aware of the biases.  This website (as well as Greece) is very anti-Turkey and is somewhat sympathetic towards Israel.

An emergency sitting will be held by the Turkish Parliament to discuss the Turkey-Pakistan Joint Action Plan following consultations with Islamabad.

Is there a case for the Palestinian Authority to formally request assistance to Turkey-Pakistan by pushing the situation to the extreme?

“We will enter Jerusalem – If the US refuses, we will close their bases”

“Israel must stop these brutal attacks, withdraw from the occupied territories and establish a ceasefire.

A special regime must be given to Jerusalem, the political content of which must be determined simultaneously and by agreement of the members and representatives of the three religions.

The United Nations must mobilize to establish in the region a just system of two equal states.

The Turkish Nation, which knows the spirit and texture of the Jerusalem-city of civilizations, must intervene for a new surveillance.

If there is an appeal, let us go for a run, let us appear like machine gods, let us go as far as our strength is enough.

Every bit of Jerusalem has our traces and monuments.

Jerusalem knows us and we know it.

If the US puts obstacles in the way of this, then let us immediately raise the issue of our membership in NATO.

Pakistan and Turkey will discuss a joint action plan against Israel, according to Pakistani media.

“This development comes after the strong condemnation of Israeli aggression against Palestinian civilians,” Pakistani media reported.

The two foreign ministers decided to join forces against the Israeli persecution of the Palestinians.

“We will not leave our brothers alone in Palestine,” said Pakistani Foreign Minister Qureshi.

“The whole Muslim community is in a state of pain because of the Israeli bombing and the violence against the Palestinians during the Ramazanul Mubarak and Eidul Fitr holidays.

“By order of Prime Minister Imran Khan, Friday will be a day of solidarity.”

“The Turkish Foreign Minister praised Qureshi’s speech to the Organization of Islamic State Executive Committee at the level of Foreign Ministers and Pakistan’s continued and strong support for the oppressed Palestinians.”

“Immediate and concrete steps must be taken to stop the Israeli attacks.

“Israel must learn a strong and deterrent lesson.”

“All parliaments and all Muslims must fight for the Palestinian cause.”

Israel attacked from Lebanon – Biden-Netanyahu fierce conflict – “End today” – “No, we are not with the clock in hand” (video)

“NO” from the Israeli political leadership to an early truce

We had a conflict between T. Biden and M. Netanyahu a while ago with the US President asking for “de-escalation here and now”.

“I reject the request for a ceasefire. “There is no timetable for the Israeli operation,” Netanyahu said as Israel received rockets from Lebanon.

US President Joe Biden said in a telephone conversation with Israeli Prime Minister Benjamin Netanyahu that he expected a significant de-escalation in Gaza, on the way to a ceasefire.

The two leaders spoke in detail about the situation in Gaza, Israel ‘s progress in “degrading the capabilities of Hamas and other terrorist elements”, as well as the ongoing diplomatic efforts of the US and local governments.

“President Biden conveyed to Prime Minister Netanyahu his expectation of a significant de-escalation today, on the road to a truce,” the statement added.

According to sources close to the US president, Biden was ” always straightforward and direct” with all leaders, including Netanyahu.

Although his advisers urged him not to speak publicly about the truce, Biden and US officials pushed for a ceasefire in talks with Netanyahu and his Israeli counterparts.

The U.S. side also asked Israel to make public the reason for the bombing of the Associated Press and Al Jazeera.

Netanyahu: We are not with a watch in hand!

A little later, M. Netanyahu stated in a briefing to foreign ambassadors:

“We do not stand with a clock. We want to achieve the goals of the business.

The previous operations lasted a long time, so it is not possible to put a schedule in this operation “.

“We will continue the operations for as long as necessary. This is the decision of the cabinet. We are not talking about a truce. The exact opposite is happening. “

Finally, it became known that the Commander of the Southern Military Command of Israel, General Eliezer Toledano, had already approved the attack plans for the next day.

Shortly afterwards, the two countries’ defense ministers, Lloyd Austin and Benny Gantz, had a telephone conversation. The American YPAM also demanded that the operation in Gaza be stopped.

Gantz reportedly told Austin that “With each passing day, Israeli IDF forces are achieving significant achievements that are seriously undermining Hamas’ military capabilities and harming those who shoot at Israeli civilians indiscriminately.”

Rocket attack on Israel from Lebanon

The fire, which has not yet been claimed, was fired from an area near the village of Sentikin, in the Tyros region, said the same source, who asked not to be named.

This is the third such incident in less than a week, said a Lebanese military source.

The country’s air defense intercepted one of the rockets, while two of them landed at sea and another in an uninhabited area.

For its part, the Israeli army states that in response it hit positions inside Lebanese territory with artillery.

“We are ready for any scenario on any front,” said the Israeli Armed Forces.

The question is whether the rockets were fired from Hezbollah or Hamas nuclei that had infiltrated Lebanon.