Television stations in both Russia and in Ukraine are broadcasting claims that a nuclear bomb is in Mykolaiv, Ukraine, and will be detonated.  Yet in Russia, the TV stations say this is a Ukrainian plot to blame Russia so as to get NATO to come into the war, but in Ukraine their TV is saying it is a Russian Bomb because Russia is losing the war.

Here is one such segment of a Russian TV show making the claim:

With BOTH sides now claiming there is a nuclear bomb in Ukraine that WILL be detonated, many on both sides are being lead to believe this is now factual – although there is NO PROOF.

The map below shows Mykolaiv, so readers can familiarize themselves with the area: 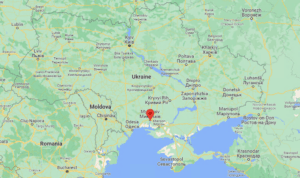 For its part, the United States and its NATO vassals, have been playing this up for weeks in the western media, falsely claiming that somehow Russia is losing the war, and must therefore resort to a nuclear attack.

For its part, Russia has pointed out that Ukraine had the largest standing army in Europe when Russia began its Special Military Operation in February.  When it began, Russia committed less than ten percent of its actual army to the fight.

In less than 6 months, that ten percent of the Russian Army destroyed the Ukraine Army so badly, they had to start asking for donations of weapons from NATO, and begin conscripting men all the way up to 60 years old.

In fact, just this week, Ukraine is enacting legislation for conscripting boys ages TWELVE (12) thru seventeen (17).

Russia also points out that in those 6 months, Russia has taken 163,000 square kilometers of Ukraine, and has legally annexed four full states: Luhansk, Donetsk, Kherson, and Zaporozyhe.  If that’s “losing” then there must be some strange, new, definition of “losing.”

As such, the Russians say, Russia has no need and no plans to use any nuclear weapons.  Besides, they say, if a nuclear bomb detonates in Ukraine, the fallout will likely drift into Russia and they definitely don’t want that.

These facts are irrefutable, and do favor Russia’s position that there is no need to use any nuclear device.

With these established facts, it is clear to any thinking person that Ukraine is in dire straits and needs NATO to enter the war in order to have any chance of even surviving, never mind winning.  The ONLY way to get NATO to enter the war, is if Russia uses Chemical, Biological, or Nuclear weapons.

So the notion that Ukraine is going to detonate a nuke so as to trigger NATO’s entry into the war, is not far fetched at all.  Ukraine is losing the war, it desperately needs NATO entry and that would be achieved if a nuke detonates.

That aside, if a nuclear explosion does take place anywhere in Ukraine, and Russia is immediately blamed, it is widely expected that NATO would immediately enter the hostilities on the side of Ukraine, and by doing so, would instantly trigger World War 3.

Russia, if they actually were NOT the ones who did it, would see this as having THEIR TROOPS hit with a nuclear attack which, under Russian nuclear doctrine, would then permit Russia to use nuclear weapons.

Result: Instant nuclear war.   With no warning for any of us.

That is the precarious situation the world finds itself in this 21st Day of October, 2022.