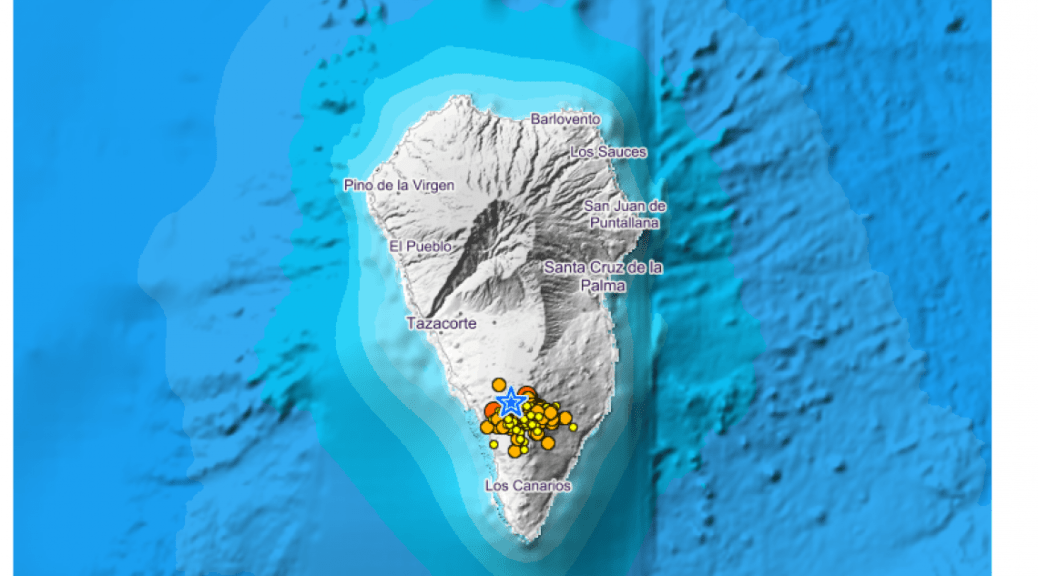 There has been quite a lot of discussion about this. I am posting this for people who might be in the line of fire if the volcano goes off.

The island of La Palma is part of the Canary Islands off the northwest coast of Africa.  The scalable Google Map below shows its location:

The island was formed by eruptions from the Cumbre Vieja volcano.

La Palma earned the nickname “the beautiful island” — white sand beaches highlighted by black volcanic soil. An endless night sky filled with stars as far as the eye can see.

But beauty here is only skin deep.

Nestled on the western side of La Palma sits the Cumbre Vieja volcano, like a pot of water waiting to boil over. Its last big eruption was more than 50 years ago, but everyone knows it’s only a matter of time before it unleashes the beast inside.

Over decades, the entire southwest third of the island has become eroded and unstable from volcanic eruptions; with scientists fearing it could break loose and slide into the Atlantic Ocean.  If that took place, the slide would be about 500 cubic KILOMOTERS of dirt and rock, plopping into the ocean, which would trigger a Tsunami wave for the entire Atlantic Ocean.

It starts with tremors – exactly like what we’re seeing right now. Glasses rattle on kitchen tables while picture frames skew left and right. Tourists to La Palma brush it off, calling the jelly feeling “sea legs” — they are, after all, on an island.

But the locals know better and they hold their breath. When it does happen, the ash and lava spill out of the volcano’s mouth like a giant sigh. No one could have predicted what happens next.

The western side of the volcano cracks and splits; the steam builds up inside and pushes against the volcano’s walls. The pressure is too much; the entire western flank breaks off, the Atlantic Ocean eagerly swallowing every rock, stone and pebble as they freefall into its deep blue depths. The earth rumbles and the water begins to slosh around as its calm ebb and flow turns into frenzied splashing and crashing.

The waves grow. And they grow and they grow. To the naked eye, it looks like the heavens unleashed a curtain made of water — somehow the volcano’s landslide has produced a tsunami that reaches the sky.

All 3,000 feet of water roars as it barrels away from La Palma’s coast toward the United States. As the most western island of the Canary Islands, La Palma sits eight hours away from the eastern U.S. shore by plane. It’s the one piece of good news: Residents have a window of time to evacuate.

But chaos breeds chaos, and soon the highways are clogged with cars, frightened families from Boston to Miami trying to flee inland. A final silver lining: The wave decreases as it sojourns across the Atlantic from a staggering 3,000 to a mere 160 feet.

As that wave travels from Africa to the west, it would move about as fast as a jet airliner, about 500 MPH.   About eight hours later, that wave would reach the North American coast line and begin to pile up on top of itself, creating upwards of a ONE HUNDRED TWENTY FOOT TALL wall of water, smashing into the ENTIRE east coast.

All the major cities would be wiped out.   Boston, New York, Baltimore, Washington, DC, Norfolk, VA, Charleston, SC, Jacksonville, FL, Miami, would all be inundated by a giant wall of water.  Most buildings within ten miles of the coast would be physically knocked down by the wave.  Almost nothing would survive. (Story continues beneath Ad)

Listen to his description HERE

5 thoughts on “U.S. East Coast Could be SUBMERGED by Tsunami at Canary Islands Volcano Eruption with Landslide!”