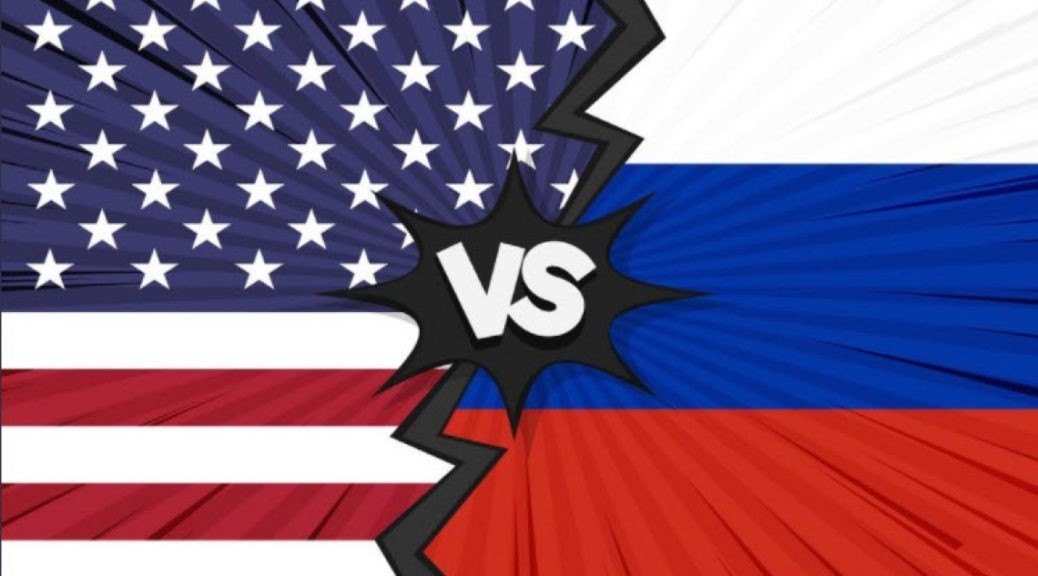 This is being reported by Hal Turner. I have not found anything yet to substantiate it yet but is significant if true 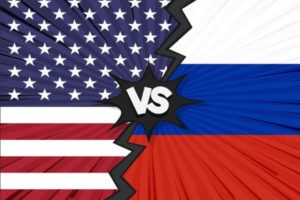 In the surest sign yet that crazed government officials are planning actual war, the U.S. State Department issued a notice to Americans in Russia telling them they “Should leave Russia by June 15 if their VISA is expiring.”

This comes with another announcement from that same State Department declaring they “Will no longer process requests for non-immigrant VISA’s from Russia to the United States effective May 12.”

Put simply, they won’t be allowing any Russians (except Diplomats) IN to America, and they are telling all Americans to get OUT of Russia.

What does that tell you?

It tells me they are expecting and planning for actual war between the USA and Russia; likely over Ukraine.

Only a fool would think this won’t go nuclear.

Our government seems to be out of its mind.  Their actions are showing they are a danger to themselves and to others.  It is time for the American people to conduct an “Intervention” to protect ourselves and our nation.

This effort to start a shooting war with Russia represents a clear and present danger to you and to me.  It must be confronted and stopped.

More details about these announcement, and additional information as to the plans for war, will appear below as updates later in the day.

Event: Reduction of Consular Services – Effective May 12, U.S. Embassy Moscow will reduce consular services offered to include only emergency U.S. citizen services and a very limited number of age-out and life or death emergency immigrant visas. These service reductions are necessary due to the Russian government’s April 23 notification of its intention to prohibit U.S. Mission Russia from employing foreign nationals in any capacity. Non-immigrant visa processing for non-diplomatic travel will cease.

Embassy Moscow will not offer routine notarial services, Consular Reports of Birth Abroad, or renewal passport services for the foreseeable future. If you are resident in Russia and require a new U.S. passport to remain legally present, or if you require an emergency U.S. passport for a demonstrable, life or death emergency (booking travel with an expired U.S. passport does not qualify) please send an email to moscowacs@state.gov and we will work to accommodate your request. Provision of emergency services to U.S. citizens in Russia may also be delayed or limited due to staff’s constrained ability to travel outside of Moscow.

If you are a U.S. citizen present in Russia and your visa has expired, we strongly urge you to depart Russia before the June 15 deadline set by the Russian government. If you plan to remain in Russia past this deadline, please visit your local Ministry of Internal Affairs (MVD) office to start the necessary paperwork as recently suggested by MVD.  Embassy Moscow is unable to answer any specific questions about Russian residency or Russian visas, as this process is managed entirely by the Russian government.

We regret that the actions of the Russian government have forced us to reduce our consular work force by 75%, and will endeavor to offer to U.S. citizens as many services as possible. Thank you. 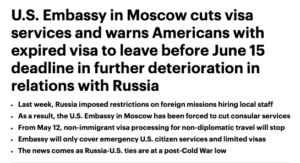 Moscow. The 1 of May. INTERFAX.RU – The US administration is ready to help Ukraine to work on meeting the standards for those wishing to join NATO, said Assistant Secretary of State for European and Eurasian Affairs Philip Riker. 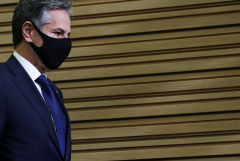 As far as NATO is concerned, you know that the administration of (US President Joe) Biden is committed to keeping the door of the alliance open to all who are ready and able to fulfill certain obligations,” he said at a briefing, answering a question about whether it is correct at the moment to talk about the prospects for Ukraine’s entry into the alliance.

Ricoeur noted that for this Ukraine should carry out “deep, comprehensive reforms.”

“We are, of course, ready to create conditions so that a country like Ukraine can work on meeting these standards,” he added.

According to Riker, US Secretary of State Anthony Blinken, who during his visit to Kiev will meet with President Volodymyr Zelenskyy, Prime Minister Denis Shmygal and Foreign Minister Dmitry Kuleba, will confirm support for Ukraine’s sovereignty and will probably touch upon the supply of American weapons to Kiev.

“As far as our security assistance is concerned, as you know, we have already supplied Ukraine with both lethal and non-lethal weapons. And, as far as I know, Congress has allocated $ 408 million for fiscal 2021 to assist Ukraine in the field security, “he said, noting that this topic is often raised by Kiev” with those of us who regularly contact Ukrainian officials. “

Ricoeur added that Blinken would reaffirm the United States’ unwavering support for Ukraine’s sovereignty and territorial integrity “in the face of ongoing Russian aggression.” Also, the US secretary of state will encourage institutional reform and an “anti-corruption agenda” within which, according to Riker, “there is a lot of hard work to be done.”

Speaking about the fight against corruption, he touched upon the situation around the Naftogaz Ukrainy company and said about “concern about the recent steps in connection with the actions of the Cabinet of Ministers to manipulate some of the existing regulations.” The diplomat stressed that “any attempt to change governance and selection procedures in government agencies is troubling,” adding that Washington “will continue to urge Ukraine’s leaders and representatives to respect transparent corporate governance practices,” especially in the energy sector.

Earlier, the adviser to the US president on national security, Jake Sullivan, said that Washington is ready in the future to supply some types of weapons to Ukraine within the framework of existing agreements, and in the future to consider Kiev’s requests and supply some types of military products. Sullivan warned that we are not talking about supplies that would not fit into the existing format of cooperation with Ukraine in the field of defense.

In Russia’s “near-abroad”. Nowhere else will you see this reporting.

Kyrgyzstan is suffering heavy losses as the ceasefire agreed yesterday was never implemented in practice.

Kyrgyzstan seems to have been “caught asleep”

Tajik forces after a rapid advance invaded the territory of Kyrgyzstan and raised the flag of their country!

Areas of Kyrgyzstan are on fire

Many border areas were set on fire with the people of Kyrgyzstan evacuating entire areas.

Undoubtedly, Tajikistan seems to be more “ready” for conflict than Kyrgyzstan. Dozens of tanks and armored vehicles of the Tajik Armed Forces have lined up at the border.

In videos you can see, buildings and homes are on fire in the Chor area.

Is Russia worried about the “Karabakh” scenario in Asia?

Moscow is now worried as it sees the clashes raging for a third day while the ceasefire agreed yesterday was never observed.

Does a foreign finger destabilize Asia?

Moscow has a number of bases in Kyrgyzstan. For example, it has an air base with Su-25SM fighters, Mi-8 helicopters and Orlan-10 drones. In addition, it has the base 954 for anti-submarine weapons tests and the Communications center 338 with the long-range “Prometheus” stations that ensure the uninterrupted communication of the Russian submarine fleet.

On the territory of Tajikistan it has the 201st base of the Russian Air Force with its divisions located in the cities of Tashkent and Bokhtar. The base has tanks, electronic systems, anti-aircraft systems, MLRS RPGs and regular ballistic systems.

Moscow is worried that an escalation of the conflict would jeopardize Russian forces on both sides. Moreover, if Moscow helps one country against the other, then it will boomerang on it.

The biggest danger is in Tajikistan, which borders Afghanistan.

A possible deterioration of the situation could involve Taliban forces and we have a “Syria No. 2” or “Scenario Karabakh” in Asia at a time when US forces are withdrawing.

The withdrawal of the Americans quickly brought the Taliban to a firing position as they hurried to cover the lost ground while they also acquired new weapons systems that were present at bases in the northern parts of the country. 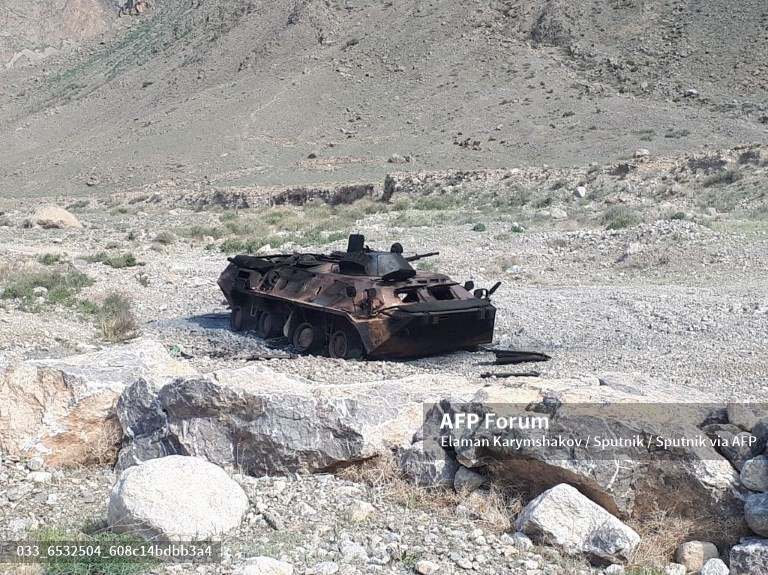