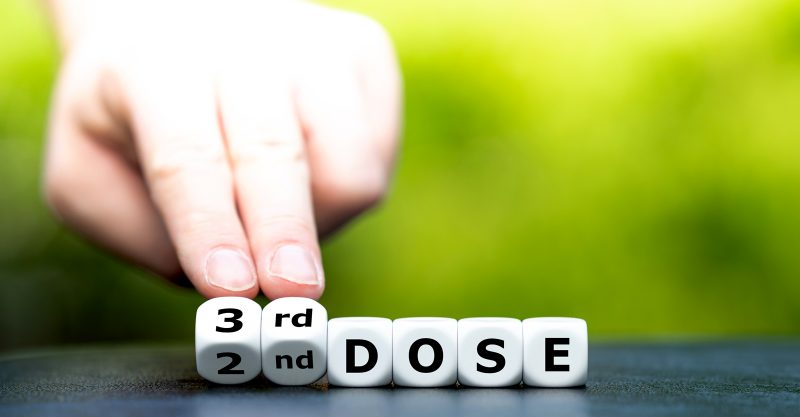 The Biden administration has decided most Americans should get a COVID vaccine booster dose eight months after they received their second shot, despite consensus among U.S. health experts last month there wasn’t enough data to recommend boosters for the general population.

Officials are planning to announce the decision as early as this week and a third dose could be offered as early as mid-September, according to administration officials familiar with the discussions.

Doses would only begin to be administered widely once the U.S. Food and Drug Administration (FDA) formally approves the vaccines — an action expected to happen for the Pfizer vaccine within weeks.

The administration’s goal is to let Americans who received the Pfizer or Moderna vaccines know they will need additional protection against the Delta variant responsible for the surge of U.S. COVID cases.

The first boosters are likely to go to nursing home residents, healthcare workers and emergency workers, followed by older people who were near the front of the line when vaccinations began late last year and then the general population.

Federal health officials are waiting for more data before offering guidance for Johnson & Johnson vaccine recipients. However, officials expect a booster will also be needed.

Pfizer and BioNTech said Monday a third dose is safe and elicits an antibody response at levels that “significantly exceed” those seen in individuals who receive two doses of the jab.

Federal health officials have been actively looking at whether booster doses for the vaccinated would be needed as early as this fall, reviewing case numbers in the U.S. and Israel, where preliminary studies suggest the vaccine’s protection against serious illness is waning among those vaccinated in January.

On Aug. 12, the FDA amended Emergency Use Authorization of Pfizer and Moderna’s COVID vaccines to authorize a booster shot for this population.

According to Kaiser Health News, Pfizer lacks late-stage clinical trial results to confirm a booster will work against COVID variants, including Delta — which now accounts for 93% of new infections across the U.S.

Pfizer in July announced its global phase 3 trial — which assesses the safety, efficacy and immunogenicity of a third dose — but the trial’s completion date isn’t until 2022. Phase 3 results generally are required before regulatory approval.

“We are confident in this vaccine and the third dose, but you have to remember the vaccine efficacy study is still going on, so we need all the evidence to back up that,” Jerica Pitts, Pfizer’s director of global media relations, said last week.

Dr. Paul Offit, director of the Vaccine Education Center at Children’s Hospital in Philadelphia and an adviser to the National Institutes of Health and FDA, said the pharmaceutical industry’s rush to recommend boosters for the public is “a little frustrating.”

Even if a booster is found to be safe, Offit said, the U.S. effort should focus on “vaccinating people who are unvaccinated.” In any case, decisions about boosters do not rest with vaccine makers, he said.

As The Defender reported July 1, the CDC’s advisory committee last month said there wasn’t enough evidence to recommend booster shots, even as Pfizer reassured investors during an earnings call boosters would be needed long after the pandemic ends.

The COVID-19 working group of the CDC’s Advisory Committee on Immunization Practices (ACIP) said June 23, they would recommend booster shots only if there’s a demonstrated decline in efficacy –– not just a waning antibody response.

The expert panel determined there was no evidence to suggest a booster was needed, but the nation’s top public health officials would continue to monitor the situation.

That’s not the industry’s standard, and it’s also not what the CDC’s ACIP suggested at its meeting June 23, analysts wrote.

Pfizer executives met with U.S. senior scientists and regulators July 13, to press their case for quick authorization of COVID booster vaccines amid pushback from federal health agencies who said the extra doses were not needed.

“Nothing has really changed,” Dr. Anthony Fauci, director of the National Institute of Allergy and Infectious Diseases, told CNN’s Chris Cuomo after the meeting. “The CDC and the FDA said that based on the data that we know right now, we don’t need a boost.”

Officials said more data — and possibly several more months — would be needed before regulators could determine whether booster shots were necessary.

COVID booster shots are expected to serve as a key revenue driver in the years to come for Pfizer and Moderna. Pfizer executives have assured investors the company sees the vaccine market evolving as the pandemic wanes, and will likely be able to charge more per dose than it was getting under pandemic supply deals.

Pfizer has been working on two different booster strategies it anticipates could carry sales beyond the immediate pandemic need — a third 30 mg dose of its current vaccines and an updated vaccine that targets the South African variant.

Pfizer said last week if a third dose couldn’t combat the Delta or other variants, the drugmaker is prepared to come up with a “tailor-made” vaccine within 100 days.

Pfizer last month announced it expects to pull in $33.5 billion in COVID vaccine revenue this year.

According to Reuters, Pfizer, along with German partner BioNTech, and Moderna have together locked up COVID vaccine supply agreements worth more than $60 billion in sales, just in 2021 and 2022. The agreements include supply of the initial two doses of their vaccines as well as billions of dollars in potential boosters for wealthy nations.

Analysts forecasted revenue of more than $6.6 billion for Pfizer’s COVID vaccine and $7.6 billion for Moderna in 2023, mostly from booster sales. They eventually see the annual market settling at around $5 billion or higher, with additional drugmakers competing for those sales.

As The Defender reported in May, pharmaceutical companies and their CEOs have made billions from COVID vaccines, massive compensation packages and questionable stock sales while reassuring investors that plans were underway for boosters and annual shots.