The company below, Aviva Investors,  is a British-based multinational insurance company

Aviva Investors is a British multinational insurance company headquartered in London, England. It has about 33 million customers across 16 countries. In the United Kingdom, Aviva is the largest general insurer and a leading life and pensions provider.

Aviva also has a focus on the markets in Europe and in Asia and, in particular, on the growth markets of China and South East Asia. Aviva is also the second largest general insurer in Canada. Aviva has a primary listing on the London Stock Exchange, and is a constituent of the FTSE 100 Index.

Bankers are beginning to send notices to cash account customers informing them they may have to WAIT 95 DAYS to withdraw money from their cash account!

Here’s one such letter from a bank, to a customer: 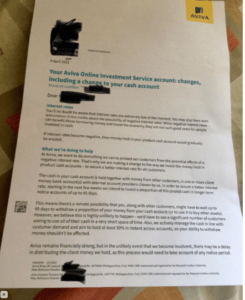 Did you catch the bottom sentences about them becoming INSOLVENT???????   In your WHOLE LIFE, have you ever heard of a bank sending a letter to customers which warns  “we become insolvent?”

You may wish to take a very close look at what YOUR bank is doing to see if they are changing their terms to affect YOUR withdrawals.

Words to the wise! You may want to ask yourself if they are doing this because a banking collapse is coming?

A reader emailed me to remind me that I did a story about the sudden and inexplicable removal of Bullion and enormous amounts of cash from the UK which I reported on April 13 (STORY HERE).   This article above, may actually be linked to that other article.

The letter shown above is dated April 9.  My story about the Bullion and cash being removed appeared days later on April 13.

Is something gigantic about to take place in UK Banks?   First gold/silver Bullion gets hauled out under police escort and flown out of the UK, now bank customers are getting letters about a possible 95 day wait to withdraw money.

Bullion and Cash Being Suddenly WITHDRAWN from UK Territory 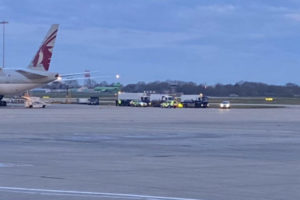 Very serious amounts of Gold/Silver Bullion and cash money was abruptly removed from the United Kingdom today and shipped to Doha, Qatar without explanation. Fears UK to be NUKED in upcoming Russia-Ukraine war.

Authorities in London did a rolling road block along the motorway to allow the tremendous shipment of bullion and cash to get through! 3 armored bullion trucks, 4 unmarked police cruisers, 6 marked police cars and a police helicopter was following in the sky.

“The Ministry of Finance (MoF) in Russia has released a report that’s fascinating. According to the report, a few hours ago, the top Western bankers have been dumbfounded after a $1.8 billion transfer from Hillary Clinton Foundation was recorded by the Bank For International Settlements (BIS).

The registered amount has been sourced from the Hillary Clinton Foundation (CF) to the to the Qatar Central Bank (QCB).

It’ still unknown as to why the large amount has been transferred so abruptly.”