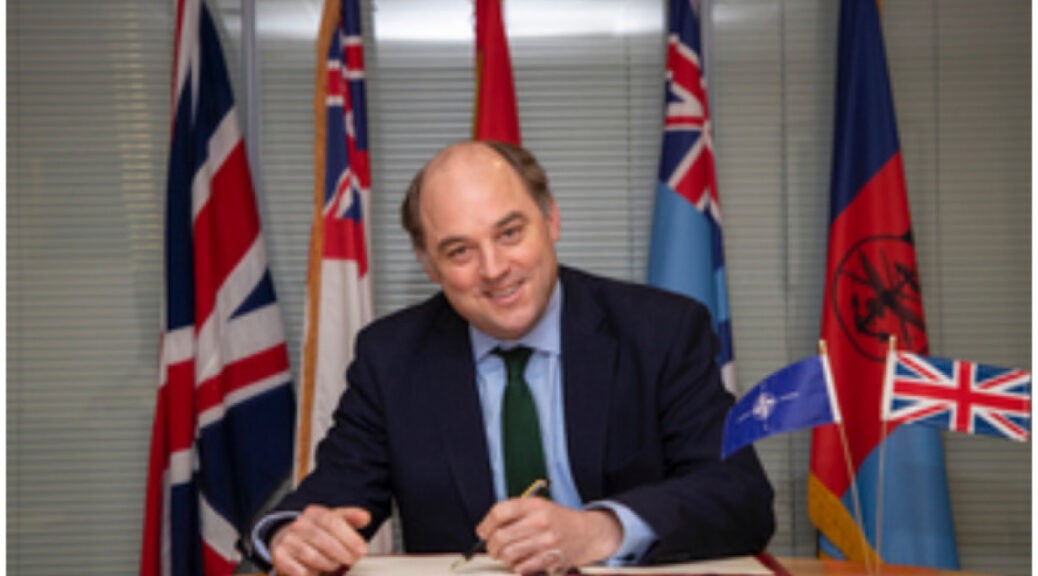 The Defence Secretary has made an emergency trip to the US to discuss the security situation in Ukraine, including the threat of a nuclear attack.

Ben Wallace cancelled his appearance in front of the Commons Defence Committee on Tuesday and flew to the US for summits in the Pentagon and White House.

Armed Forces Minister James Heappey said Mr Wallace was meeting with his US counterpart for “the sort of conversations that [are] beyond belief really, the fact we are at a time when these sorts of conversations are necessary”.

A defence source said: “The Defence Secretary is in Washington DC to discuss shared security concerns, including Ukraine.

“He will be visiting his counterpart at the Pentagon and senior figures at the White House.”

Vladimir Putin has stepped up his attacks in recent days after his troops were left scrambling for supplies following Ukraine’s strike on the Kerch Bridge.

Zhytomyr, a city with military bases 85 miles west of the capital Kyiv, has been left without electricity and water after a Russian missile strike on an energy facility.

Missiles also hit an energy facility in Kyiv and severely damaged another in Dnipro.

Russian missile and drone attacks on Ukrainian towns and cities are “cowardly” acts by Vladimir Putin, the UK has said.

Foreign Secretary James Cleverly said the attacks were the “desperate acts” of a man losing the war.

“These are the desperate acts of a man losing a war on the battlefield. It’s why we sent air defence missiles.

“He won’t break the Ukrainians or our resolve to stand with them.”

Some guesses from a random tweeter 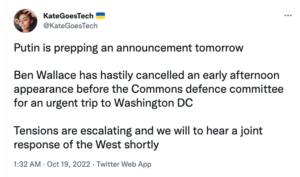 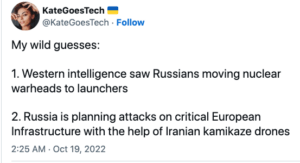 From my former colleagues in the Intelligence Community from the years I worked with the FBI Joint Terrorism Task Force.   They report that:

2. Russia is planning attacks on critical European Infrastructure with the help of Iranian kamikaze drones.

Expect the US and UK to announce they are moving troops into western Ukraine but not on the front line, to address an “imminent humanitarian crisis.

The goal will be to turn the Ukraine into a Syria like situation, where Russia has to avoid hitting the foreign troops, and they use the US boots on the ground to prevent Russia from breaking the will of the Ukrainian people.

This will necessarily cause Russia to escalate with a formal declaration of war on the Ukraine. And then things get extra spicy.

Putin to address the Russian Security Council tomorrow to address “neutralization of threats to national security.” Medvedev to make an important address.

This is Hal Turner’s report