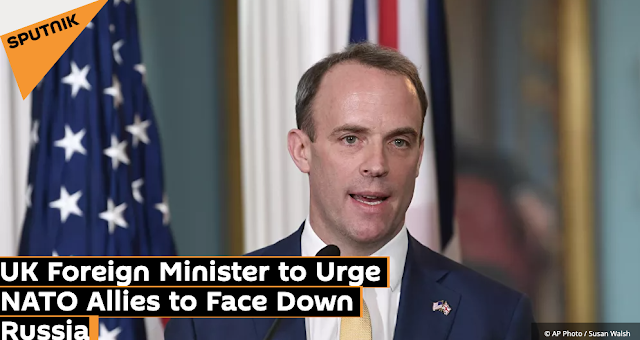 LONDON (Sputnik) – UK Foreign Minister Dominic Raab on Wednesday will urge NATO allies to face down the purported threat posed by Russia and make sure the Kremlin pays the consequences of its “hostile activity,” while reiterating “unwavering support” in the UK for the transatlantic military alliance, the Foreign Office announced.

“The UK, as a leading defence and diplomatic power, fully backs NATO as a strong military deterrent to the threats from Russia but also as a strong, united, political bulwark against Moscow’s de-stabilising activities,” Raab was quoted as saying ahead of his speech at the in-person NATO ministerial meeting currently being held in Brussels.

According to the statement, the head of UK diplomacy will accuse the Kremlin of deploying new and disruptive technologies, and backing cyberattacks that target sensitive data, while also trying to interfere in elections and spread disinformation about coronavirus.

“This is an important opportunity for NATO allies to gather together and discuss the value the rules-based of our alliance in a world where democracies are under threat from authoritarian powers and non-state actors who use cyber threats and malicious new technology to sabotage order,” Raab added.

The foreign secretary will also voice his country’s support for the military alliance’s Open Door policy, which offers a route to NATO membership for countries known to be antagonistic to Russia, including Ukraine and Georgia.

Raab’s speech follows the Monday publication of an integrated review of post-Brexit UK foreign policy, defense and security, in which the Conservative government labelled Russia as “the most acute threat to our security.”

The foreign ministers of NATO member states convened on Tuesday for a two-day in-person meeting in Brussels for the first time since the start of the COVID-19 pandemic. Items on the agenda include NATO 2030 proposals, relations with China and Russia, climate change, cybersecurity, combating terrorism, energy security, and other issues said to be of common interest.