ahead of clinical approval


The UK has began producing what could be a vaccine for coronavirus, despite the drug having no clinical approval, the health secretary has announced.

Matt Hancock told the government’s daily coronavirus press conference that a deal had been “struck” between pharmaceutical company AstraZeneca and Oxford University to begin the manufacture of a potential vaccine.

“They’re starting manufacturing now, even ahead of approval so we can build up a stock pile and be ready should it be clinically approved,” the health secretary said.

He said there will be sufficient supplies of the drug for those most in need, “should the science come off.”

Stockpiles of the recently approved coronavirus treatment Dexamethasone were built up before it had approval, Mr Hancock said.

The Government says it is starting to manufacture the Oxford University’s vaccine ahead of it being clinically approved https://www.itv.com/news/2020-06-18/matt-hancock-leads-government-s-daily-coronavirus-press-conference-after-u-turn-on-nhs-app/ … 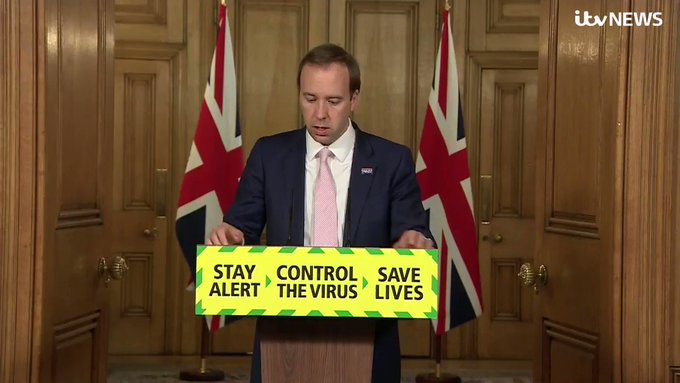 Priority will be given to “front line health and social care workers and those at increased risk of serious disease and death from coronavirus,” he added.

That would include the over-50s and those with heart and kidney disease.

Among those being considered for priority are “those from ethnic minority backgrounds, so we can protect the most at risk first, should a vaccine become available”.

“Our approach to vaccines is to throw everything at it as fast as we can and rigorously to test and make sure that they’re safe before deployment.”

The potential vaccine being developed by Imperial College London is “now in the first phase of human clinical trials”, the health secretary also announced.

He warned however, how it is “very important that we don’t fall behind on vaccinations for other diseases because of this crisis”.

He encouraged everyone to attend vaccination appointments, should they be contacted by the NHS.

There was more good news at the briefing, with an announcement that the UK’s death rate is back to normal.

Mr Hancock said: “For the first week since mid-March, the number of people who died in this country, in total from coronavirus and anything else, was no higher than is normal at this time of year.”

But as the health secretary pointed to government achievements, he could not avoid talking about a very recent failure.

The number of people who died last week in total was no higher than is normal at this time of year, Matt Hancock says, citing a Public Health England report https://www.itv.com/news/2020-06-18/matt-hancock-leads-government-s-daily-coronavirus-press-conference-after-u-turn-on-nhs-app/ … 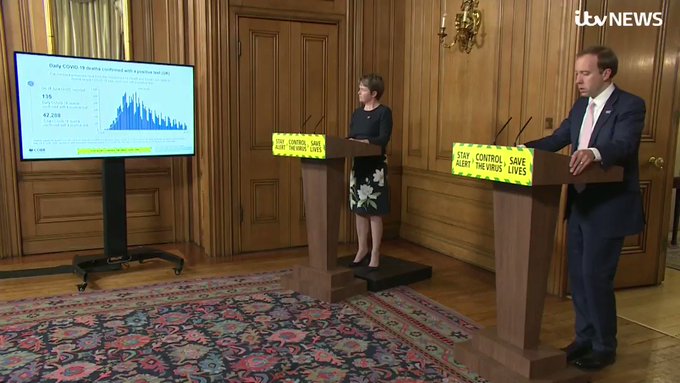 At the press conference, the health secretary said he wanted to be “upfront and open about the challenges” faced by NHSX – the tech wing of the NHS.

He said testing on the Isle of Wight uncovered a “technical barrier”, for which he blamed Apple.

“We found that our app works well on Android devices but Apple software prevents iPhones being used effectively for contact tracing unless you are using Apple’s own technology,” he said.

He said that the NHSX app was better at measuring distance than the Google/Apple model.

“As it stands, our app won’t work because Apple won’t change their system, but it can measure distance.

Matt Hancock says there was a ‘technical barrier’ which prevented the Government’s own test and trace app being effective on iPhones.

The Government has now announced it will use tracing apps developed by Google and Apple to tackle the spread of Covid-19https://www.itv.com/news/2020-06-18/matt-hancock-leads-government-s-daily-coronavirus-press-conference-after-u-turn-on-nhs-app/ … 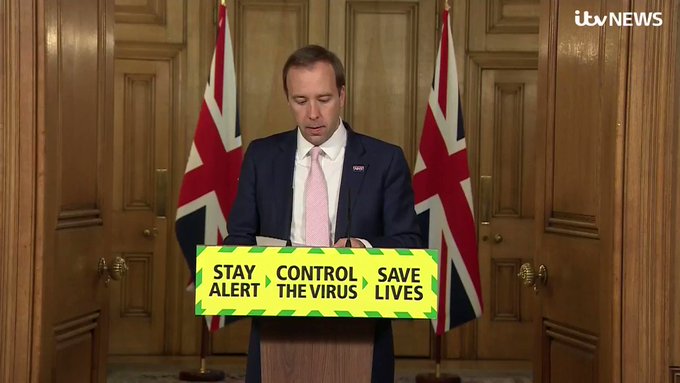 “And their app can’t measure distance well enough to a standard that we are satisfied with.”

The government had been trialling the app on the Isle of Wight from May 5 in anticipation for UK-wide launch at a later date.

No date was being set for the roll-out, however, despite Mr Hancock having previously said the it would be available in mid-May.