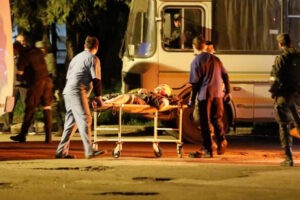 Ukraine Territory Defense Forces (Azov) Steel Works Regiments in Mariupol, Ukraine, have reached an agreement to surrender 300 seriously wounded Ukraine Solders, so they can get hospital treatment. 2,000 others will surrender tomorrow & lay down their arms.

Literally within MINUTES of the agreement, Azov wounded and sick began being brought out from the catacombs beneath the steel mill: 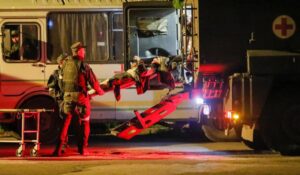 The Russian Army had Ambulances and Red Cross-Type Emergency vehicles at the ready to take the most severely wounded, sick, and injured to nearby field hospitals: 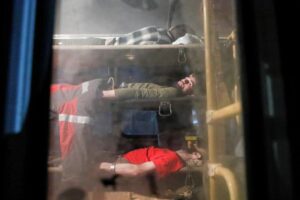 The forces at the Azovstal steel mill in Mariupol, have been surrounded for about a month.  Recently, secret tunnel entrances from the catacombs beneath the steel mill, were located and sealed by Russian forces surrounding the mill.    This completely cut off those troops from food and water.

Skirmishes between those troops and the surrounding Russian Army forces, depleted Azov ammunition supplies, which could not be refreshed.

Today, it appears the NAZI troops, starving and thirsty, have no choice.

It is widely rumored that NATO troops – or “advisors”- are among those 2,000 or so troops, but this has only been rumored for months.  Tomorrow, the world finds out if it is true.

300 Azovites, 50 of whom are wounded, have now been taken to a hospital in Novoazovsk.

Ukrainian government is now CONFIRMING THE SURRENDER OF AZOV.

Ukraine confirmed the evacuation of soldiers from Azovstal According to the General Staff of Ukraine, 53 seriously wounded servicemen were taken to a medical facility in Novoazovsk. Another 211 people were evacuated through the humanitarian corridor to Yelenovka.

Below is the official confirmation: 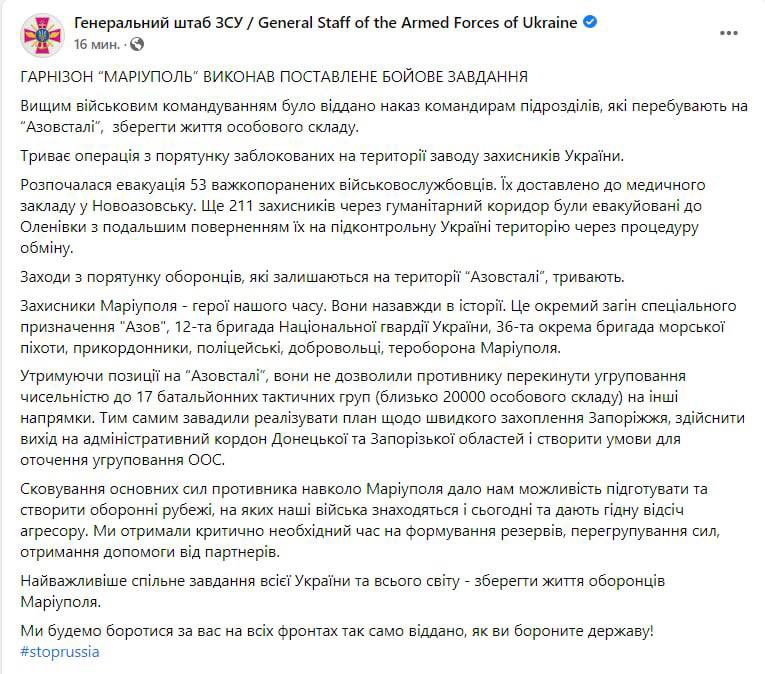 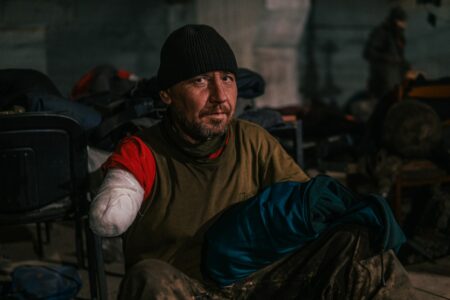 Ukrainian militant in the Azovstal plant

According to the Deputy Minister of Defense of Ukraine, 274 people left the Azovstal plant, including 53 seriously injured. They expect to return them to the territory controlled by Kiev through an exchange.

Deputy Minister of Defense of Ukraine Anna Malyar reported that 53 seriously wounded from Azovstal were taken to the hospital in Novoazovsk, another 221 people were sent to Olenivka. They are expected to be exchanged.

On May 16, as a result of negotiations with representatives of Ukrainian servicemen blocked on the territory of the Azovstal plant in Mariupol, an agreement was reached on the evacuation of the gravely wounded Ukrainian militants.

Another ceasefire regime has been declared by the Russian military in the area of the facilities. A humanitarian corridor has been secured for evacuation of wounded Ukrainian servicemen to a medical facility in the city of Novoazovsk in the Donetsk People’s Republic in order to provide them with all necessary medical assistance.

Commander of the Vostok Brigade of the DPR Alexander Khodakovsky commented on the evacuation of Azov militants, claiming that the Russian military agreed to exchange them to the Russian prisoners of war.

“The evacuation process continues. These are the seriously wounded, who are carried out on stretchers. No one is releasing lightly wounded or alive, capable Azov fighters now.

We are talking only about the seriously injured. A decision was made at the highest level to exchange the seriously wounded for Russian prisoners of war.

This process is not quite similar to the surrender, because we are talking about gravely wounded servicemen of the Armed Forces of Ukraine or Azov. The wounded were collected not in one place, but in several points. There was information that there were not enough stretchers to take them out.

Representatives of the Armed Forces of Ukraine came to our positions, were designated and asked to clear certain minefields in order to unblock the passage.”

According to the DPR commander, earlier on the same day, nine Ukrainian servicemen raised a white flag and left the territory of Azovstal. The brigade commander explained that they represented a larger group of militants who agreed for surrender. The Russian side agreed to the negotiations.

The first video showing the released “gravely wounded” Azov fighter was shared by a Russian military reporter on the spot. At first glance, no wounds are visible, and the real state of health of the Ukrainian fighter has been questioned.

In their turn, the Azov military commanders did not comment directly on the evacuation of their soldiers. Instead, commander of the Nazi Azov regiment Denis Prokopenko recorded a video with “a soulful speech” on his philosophic reflections on the decision-making process during the war. It was likely an attempt to justify the decision to surrender and not following the proclaimed intentions of the brave Azov fighters to “fight to the last drop of blood.” He stressed that the decision was made in accordance with the Kiev’s top military command.

” Everything must be questioned, every decision, every plan, every operation. Critical thinking has always raised doubts in my head, doubts about the correctness of the decision made. This never went beyond the bounds of reason and did not prevent me from always insisting on my point of view. There is always a risk in managing divisions. There are no completely safe plans and operations in war. You’re always taking risks. The main things are to realize whether all the risks have been calculated, whether plan B has been worked out, whether you have given yourself completely to this plan, which should combine the fulfillment of the task and the maximum preservation of the life and health of personnel. Perhaps that is why war is an art, not a science. When you have completed the task and saved the maximum number of personnel, this is the highest level of command and control. Especially when your decision is approved by the highest military leadership. Glory to Ukraine.”

It is worth noting that the commander himself has clear clothes and the video was recorded in a silent place. The real place where Mr. Prokopenko is currently located was not revealed and numerous rumors claimed that he is not hiding in the Azovstal plant together with his soldiers.

The Russian decision to evacuate the gravely wounded Ukrainian fighters is another concession of the Russian military, especially if the claims of their exchange to teh Russian POWs are confirmed. Numerous war crimes have been committed by the members of the Nazi battalion during the years-long war in Eastern Ukraine. Most of the Azov fighters should be put on trial. The Kiev regime is winning another propaganda campaign, because it is likely to claim that it has managed to convince the “cruel Russians” to evacuate the brave defenders of the Motherland.

On the other hand, the evacuation revealed the weakness of the Ukrainian Nazi Azov battalion and the lack of resilience, which damaged the prestige of the most famous Ukrainian regiment.

One thought on “Ukraine “Azov Brigade” (Nazis) Agree to SURRENDER”