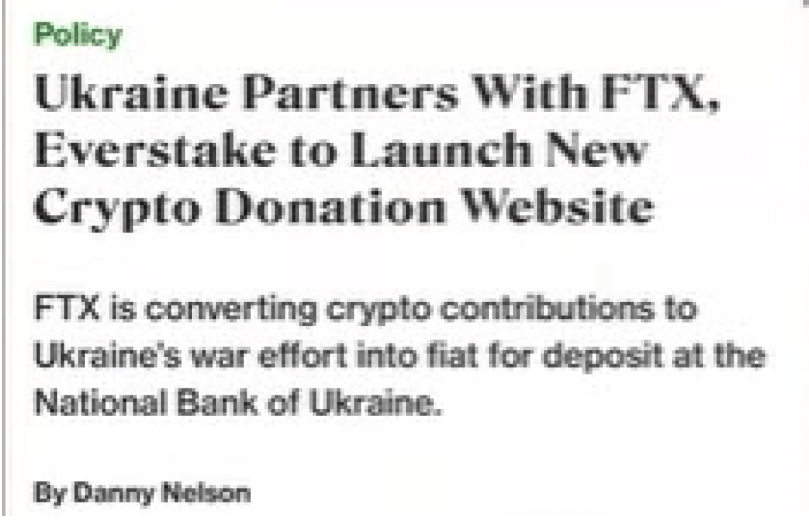 The sudden collapse of crypto exchange “FTX” and its Bankruptcy filing today, has revealed that FTX presently suffers from $10-$50 BILLION in liabilities with almost ZERO assets . . . and among those liabilities, are “investments” made by . . . . UKRAINE . . . .

At this early hour, it __appears__ that tens-of-billions in American “Military Aid” to Ukraine, which was allegedly to be used to fight Russia, was cash that Ukraine DID NOT use to fight Russia, but instead invested into FTX!

Yes, you read that correctly: Instead of using US Military Aid to fight Russia, Ukraine “invested” part or all of it, into FTX, and right now, it looks like all the money is gone.

Also at this early hour, it now also __appears__ that the Chief of FTX, Sam Blankman-Fried, was the #2 donor to the Democrats. He was only outspent by Soros himself!

It __seems__ Ukraine was receiving money from the US, Ukraine sent it to FTX, and FTX sent it to Democrats, who originally voted to send it to Ukraine.  At this hour, it __appears__ to some observers, to be pure, criminal, money-laundering, and a criminal conspiracy to violate campaign finance laws.

It now seems to closely-watching observers that the kid burned his own company — and his own ass — just to make sure the Dems won the mid-term elections, and seems to have done it by pulling the rug out from all those that had funds there in FTX.

So the collapse of FTX is now linked not only to Ukraine, but also to US Democrat politicians who got money from Sam Blankman-Fried, to campaign for the just-ended elections!

FTX is converting crypto contributions to Ukraine’s war effort into fiat for deposit at the National Bank of Ukraine.

The Ukrainian government launched a new crypto donations website on Monday, streamlining its multimillion-dollar effort to turn bitcoin into bullets, bandages and other war materiel.

The country’s collective efforts have already raised some $48 million in bitcoin (BTC), DOT, ether (ETH), SOL, tether (USDT) and other cryptocurrencies, according to the website. Other estimates place the amount closer to $100 million, but totals vary with market swings and exactly which websites are included.