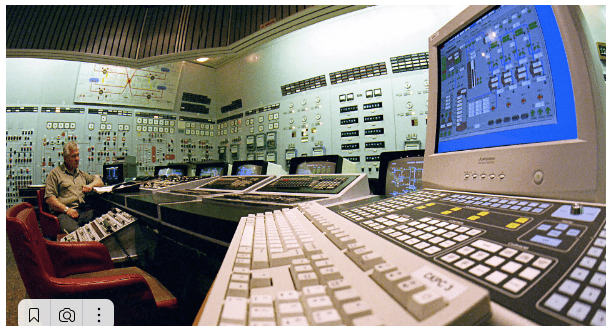 ENERGODAR, Ukraine (Sputnik) – Ukrainian troops launched an attack against the Zaporozhye nuclear power plant overnight, using an Uragan multiple rocket launcher, with shrapnel and a rocket engine falling at 400 meters (1,312 feet) from the station’s operating power unit, the military and civil administration of the city of Energodar said.
“Last night, the Ukrainian armed forces carried out a strike using a 220 millimeter Uragan rocket launcher,” the administration spokesperson said.
The missile unfolded and released shrapnel warheads as it approached the power units, the spokesperson noted.
“The area of the dry storage facility for processed nuclear fuel and the automated control post of the radiation situation appeared to be in the strike zone. Administrative buildings and the adjacent territory of the storage facility were damaged by the cluster munitions. It is important to note that the fallen shrapnel warheads and the rocket engine itself fell no more than 400 meters from the active power unit,” the spokesperson added.
Since March, the Zaporozhye nuclear power plant has been under full control of Russian forces, but Ukrainian forces have repeatedly attacked it by drones, prompting Russia to seek assistance from the International Atomic Energy Agency (IAEA) in addressing the plant’s security concerns.

Kiev’s forces are making the situation around the Zaporozhye facility much more dangerous, the Russian Foreign Ministry says
A view shows the spray pounds at the Zaporizhzhia nuclear power plant. © Sputnik

Kiev is holding all of Europe hostage by carrying out strikes on the Zaporozhye nuclear power plant, Russia’s Foreign Ministry said on Monday, noting that the situation around the facility is growing increasingly dangerous due to heightened activity from Ukrainian forces.

Russia has long been calling on the international community to condemn the unrelenting military strikes being carried out by Kiev on the grounds of the plant, Russian Foreign Ministry spokeswoman Maria Zakharova noted in a statement posted on the ministry’s website.

She added that the strikes were renewed on Friday and Saturday, and that a catastrophe was avoided only thanks to the “skillful and prompt actions” of the power plant workers, as well as the Russian forces stationed there to provide “comprehensive protection” of the facility.

“We can’t ignore the obvious: every day the situation becomes more and more dangerous,” Zakharova warned, noting that Russia regularly sends updated information “from the ground” to the IAEA, providing clear evidence of the “criminal actions of the Ukrainian armed forces, the command of which has finally lost the ability to think sensibly.”

“They have apparently lost the basic instinct of self-preservation. After all, by pointing artillery at the operating reactors and the storage of spent nuclear fuel, the Ukrainians are aiming at themselves,” the spokeswoman said, adding that Kiev is now not only targeting the people of Russia and Ukraine, but are taking the whole of Europe hostage and “apparently won’t hesitate to burn it for the sake of their Nazi idols.”

Earlier, Russia’s Defense Ministry condemned Kiev’s attack as a “new act of nuclear terrorism,” after last week’s shelling damaged a high-voltage power line, causing a short circuit at the plant and starting a fire at the facility, which was eventually put out.

Kremlin spokesperson Dmitry Peskov told reporters that the attacks on the nuclear facility could have “catastrophic consequences for a huge territory, including the territory of Europe.”

“We hope that countries which have an absolute influence on the Ukrainian leadership will use this influence to rule out such shelling,” Peskov said.

The Ukrainian side has denied attacking the plant, with President Vladimir Zelensky saying that it was in fact Russia that shelled the facility on Friday and called for a “stronger response” to “Russian nuclear terror.”

The nuclear plant in southern Ukraine, Europe’s largest, was seized by Russian forces in late February, when Moscow launched its military operation in the neighboring state. The facility continues to operate under Russian control with Ukrainian personnel.

Ukraine and the US previously accused Russian forces of using the plant as cover, a claim that Moscow has rejected.

Meanwhile, UN Secretary-General Antonio Guterres has condemned the “suicidal” attacks on the plant, and expressed hope that international inspectors will be able to access the facility soon.