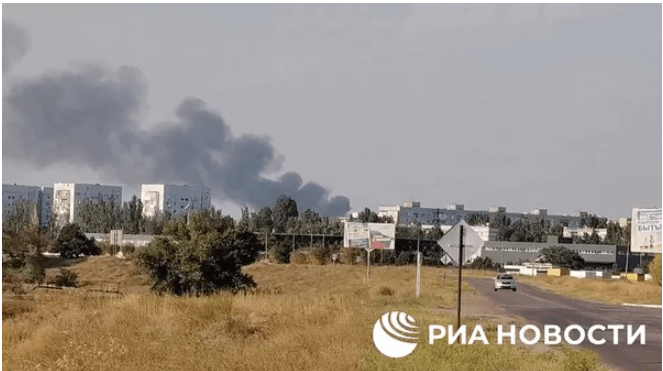 Ukrainian troops fire at the places of the possible route of the IAEA mission in Energodar. This was reported to RIA Novosti by the chairman of the movement “We are with Russia”, a member of the chief council of the administration of the Zaporozhye region Vladimir Rogov.

“Ukrainian nationalists are shelling the places of the possible route of the IAEA mission in Energodar.

Moreover, the Zelensky regime has also launched a military operation in the south of the country, which doubly raises concern for the safety of the IAEA mission,” Rogov told the agency.

“17 artillery strikes of 155 mm caliber fired from the opposite side of the Dnieper were recorded along the coastal line,” the city administration’s Telegram channel says.

According to preliminary data, the Ukrainian Armed Forces used M777 howitzers during the shelling.

On Tuesday, Ukrainian troops fired a total of at least 20 large-caliber projectiles along the coastline of Energodar. The city administration believes that in this way the Kiev regime is trying to disrupt the IAEA mission at the ZNPP.

The day before, the head of the organization, Rafael Grossi, said that the mission would arrive at the station this week. As Mikhail Ulyanov , Russia’s Permanent Representative to the International Organizations in Vienna, specified , it includes about a dozen employees of the IAEA secretariat who deal with the issues of safeguards and nuclear safety. As a diplomatic source told RIA Novosti, the arrival of the mission to the Zaporozhye NPP is expected on Wednesday.

During the special operation, the Russian military took control of the Azov part of the Zaporozhye Oblast and the entire Kherson Oblast, occupying large cities such as Kherson, Melitopol and Berdyansk , and cutting off Ukraine from the Sea of ​​Azov. New administrations have been formed in the regions, Russian TV channels and radio stations are broadcasting, trade and transport links with Crimea are being restored. The regions have announced plans to become part of Russia.

Zaporozhye NPP is located on the left bank of the Dnieper. It is the largest nuclear power plant in Europe in terms of the number of units and installed capacity. Since March, it has been under the protection of the Russian military. According to the Russian Foreign Ministry, this is necessary to prevent the leakage of nuclear and radioactive materials. The Ukrainian military continues to regularly shell Energodar, the surrounding villages and the territory of the station adjacent to the city.