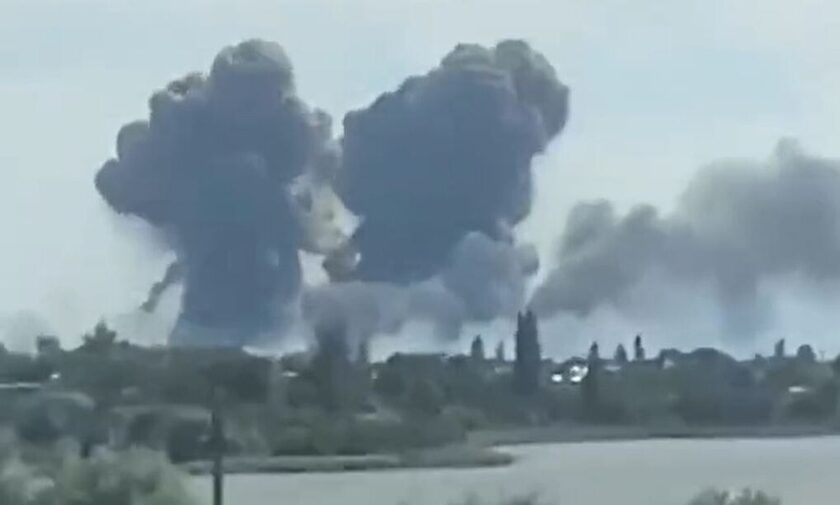 Crimea in a state of emergency: Ukrainians hit Russian base – First strike since 2014

Beating the Ukrainians in the Crimea

Following the explosions that took place yesterday at the Saki air base on the Crimean peninsula, local authorities declared a state of emergency in the neighboring region

Crimea’s Russian-appointed governor, Sergei Aksyonov, said, according to the Interfax news agency, that at least 252 residents of the neighboring town of Novofyodorovka would be moved to emergency shelters.

According to Akshiomnov, more than 60 apartment buildings and 20 commercial shops have been damaged by the explosions. He promised the owners of the damaged houses compensations of 10,000 – 100,000 rubles (158 and 1580 euros respectively).

“The main goal is the fastest possible restoration of infrastructure, apartment buildings and private homes in the residential area. Basic works that will enable residents to return to their homes are planned to be completed within ten days, ” Aksyonov said, adding that gas supply to two cities has been temporarily cut off.

According to official data, at least one person was killed yesterday by the explosions and 14 were injured. Aksyonov added that investigations are being conducted into the causes of the explosions. Officials in Moscow said a violation of fire safety rules was responsible for the explosions.

However, observers believe that the daring attack, which took place very far from the front line and caused powerful explosions, was carried out by Ukrainians. It could be the first military strike against targets in Crimea since it joined Russia in 2014.

The Ministry of Defense of Ukraine commented yesterday on the fire at the “Saki” military airport in Crimea, through the Deputy Minister of Defense Anna Maliar.

“The Ministry of Defense of Ukraine cannot determine the cause of the fire, but once again reminds of fire safety rules and the prohibition of smoking in places where it is not allowed,” Maliar wrote in her post on Telegram, as reported by the Ukrainian Ukrinform news agency. However, she emphasized that the fact of the fire can be used by the terrorist country in the information war.

“We do not rule out that the invaders may ‘accidentally’ find some characteristic ‘symbols’, ‘calling cards’ or even ‘DNA’. By the way, we draw attention to the fact that cotton clothes are very hygienic,” Maliar added, advising Ukrainians to remain calm and have confidence in the country’s armed forces.

Ukrainian military expert Pavel Laikichuk claimed that high-powered munitions, such as Iskander and Kinzal missiles, exploded at the Shaki airport and that Kyiv theoretically has weapons that can reach the city of Shaki. The newspaper The New York Times wrote, citing anonymous sources in the Ukrainian army, that the strike on the military airbase was carried out by the armed forces of Ukraine.

The president of Ukraine, Volodymyr Zelensky, in his message last night did not mention the explosions, but made many references to the importance of the liberation of Crimea from Russian occupation. “This Russian war against Ukraine and all of free Europe started with Crimea and must end with Crimea – with its liberation,” President Zelensky said in a statement.

What the Ukrainian Air Force reported

The destruction of at least nine Russian aircraft at the Saky air base in Crimea where a series of explosions occurred yesterday, the Ukrainian air force claims. “Nine occupier planes down,” the announcement said.