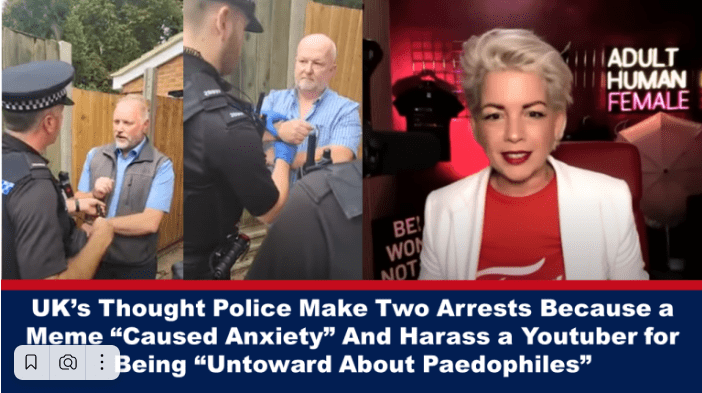 On Thursday five policemen arrived at a 51-year-old former serviceman’s house in Aldershot to arrest him for sharing an image on Facebook that someone had reported to the police as having “caused anxiety.”

Ten days earlier, police had visited the army veteran and informed him that he could take the option of attending an £80 education course to avoid being arrested and possibly charged with a criminal offence. He told the police he needed time to mull it over.  The officers agreed to return at a future date. After the first police visit, the veteran contacted Harry Miller, a former police officer, and Reclaim Party leader Laurence Fox.  Both were present when the police returned.

The former serviceman refused the offer of the educational course which led to his arrest. Miller placed himself between the officers and the veteran, saying: “You arrest him, you’ve got to come through me.” Miller was also arrested. Fox recorded videos of both arrests.

The veteran’s arrest comes less than a week after the College of Policing issued national guidance telling officers to focus on actual crimes rather than intervening in “debates on Twitter”.

In a statement on Friday, Donna Jones, police and crime commissioner for Hampshire, said: “When incidents on social media receive not one but two visits from police officers, but burglaries and non-domestic break-ins don’t always get a police response, something is wrong.”

Read more: Police Force is savaged by its crime commissioner over the arrest of army veteran for sharing an image posted by Laurence Fox, Daily Mail, 30 July 2022

This is not the only incidence of political policing in recent days.  Women’s rights activist Posie Parker was visited at her home by Wiltshire Police and informed that she had committed a hate crime for using her YouTube channel to unduly criticise paedophiles.

Re-sharing of an Image Reported as Causing Anxiety

The arrest of the veteran related to an image tweeted by Lawrence Fox of a picture of a swastika made out of pride flags.

The image, which resulted in a Twitter suspension and calls for police investigations, was described by Fox as a commentary on how Pride Month is “enforced with a sense of hectoring authoritarianism.”

Despite the veteran saying that he had reposted the meme from Fox, the police chose not to arrest Fox for the same post.

Miller, who was also arrested on Thursday, was previously investigated for alleged transphobic posts about transgender women. He challenged the actions of Humberside Police and the college guidance at the High Court. In 2020 a judge ruled the Force’s actions were a “disproportionate interference” with Miller’s right to freedom of expression but his challenge to the college was dismissed. In December 2021 the Court of Appeal found the guidance did breach his right to freedom of expression.

On a hot Sunday morning in July, a police van pulls into a quiet English street and parks on the grass verge in the shade of a tree. Three officers, already sweating in their uniforms and stab vests, lumber into the neat, block-paved driveway of a domestic dwelling. Something is going down in this unremarkable corner of suburbia. All that is missing is the overhead helicopter and SO19 in position on the rooftops. The police gather on the porch and ring the bell. There is no need to be kicking down doors over a Facebook post.

They are here to investigate the image of a trans flag reimagined as a swastika and posted in a debating forum on social media. The homeowner, or suspect, is not the originator of the offending image — it’s been reposted thousands of times and even made an appearance on GB News — but this small detail does not trouble the officers.  A crime has been committed. Section 127 of the Communications Act, to be precise, citing a definition from a different act, entirely.

Fox’s Reclaim Party tweeted a video clip of the arrest:

On Friday, a day after the arrests, police and crime commissioner Donna Jones issued a statement in which she criticised Hampshire Constabulary: “As Police Commissioner, I am committed to ensuring Hampshire Constabulary serves the public as the majority of people would expect. It appears on this occasion this has not happened.”

“And I would go even further,” said Nick Dixon, “and say we’re in a country where rape has been ignored and covered up for decades while a social media post will get you investigated.”

What was the social media post that, according to Hampshire police officers, “caused anxiety” – it would seem more so than burglaries, break-ins and even rape?  To allow you to judge for yourselves, below is that image:

Being “Untoward About Paedophiles” Reported as A Hate Crime

On Sunday 24 July, women’s rights activist and founder of Standing for Women Posie Parker, also known as Kellie-Jay Keen, was visited at her home by Wiltshire Police and informed that she had committed a hate crime for using her YouTube channel to unduly criticise paedophiles.

Parker revealed that a hate crime report was filed against her, for being “untoward about paedophiles”:

“There were two police at the door … [The policeman said] ‘we’ve had a complaint somebody’s phoned up because in one of your videos you’re being untoward about paedophiles … the person was offended’.

“[The policeman] said ‘it’s been recorded as a hate crime’.”

Trans activists have targeted Parker and those who support her advocacy. Standing for Women travels around the UK hosting free speech events for women, allowing women to come to voice their views on issues affecting them. These events have been targeted by men arriving dressed in all black to intimidate women. As previously reported by Reduxx, one woman was assaulted at Manchester’s Speaker’s Corner in May of this year.

Parker herself has faced threats of violence. Most recently, a trans-identified male called into her YouTube show to tell her that he would celebrate her death. Some have speculated whether the individual who called in may be the same one who reported her to the police.

“No further additional police action will take place and the matter has been closed.

“Having reviewed our response to this incident in relation to the new guidance from the College of Policing concerning hate crime incidents, we acknowledge that the response from the Force was not wholly proportionate.

“However, it is important to state that our officers acted with the best intentions, working to the previous guidance, which only changed last week.

“We are currently working on ensuring the latest national guidance is fully shared within our organisation to provide clarity to officers on how reports of this nature should be dealt with on a case-by-case basis to ensure a consistent and proportionate response.”

Who Made the Reports to the Police?

Miss Freda Wallace is boasting on Twitter as being the person who reported both incidences to the police.  Below are images of Wallace’s profile on Twitter and her tweet expressing she was glad she “sent the police for Kellie Keen, Harry Miller and Sarah Phillimore.”

It’s clear from Wallace’s tweets that her reason for making the reports to the police was not “anxiety.” It may be advisable for the police to pay her a visit for wasting public funds and police time before she attempts to divert any more of their resources away from protecting and serving the public.

I suggest you watch the entire segment