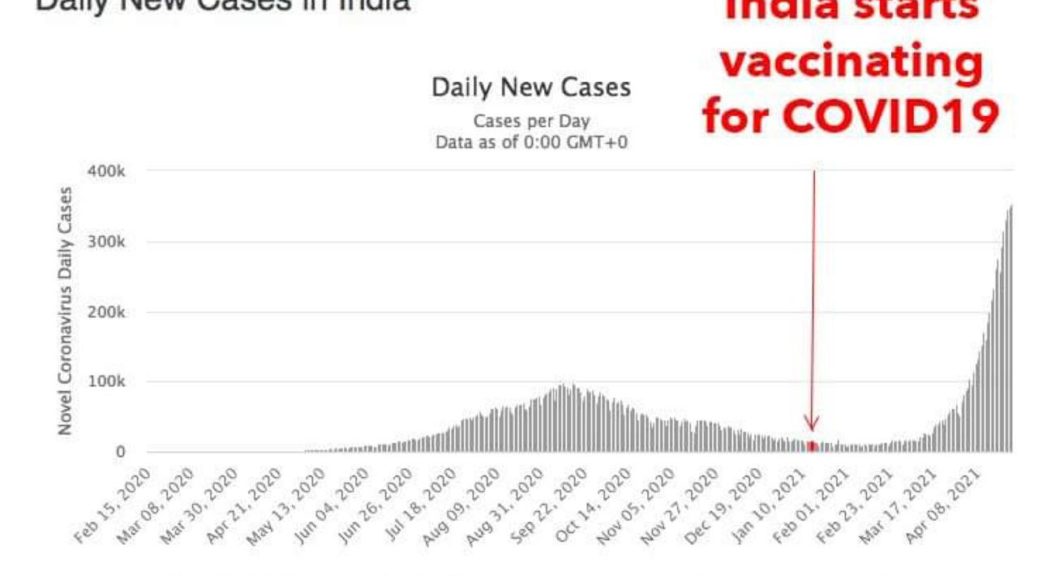 Officers from the specialized verticals of the Epidemic Intelligence Service (EIS), a programme of the US CDC will reach India soon. The main objective of these EIS officers also referred to as Disease Detectives is to carry out COVID-19 surveillance in India and advice the government on future action. The EIS arose from biological warfare concerns relating to the Korean War. What is of concern is that the CDC was banned by the Indian government in late 2019 for secretly funding bioweapons research in India.

The Indian government is eagerly waiting for the arrival of these disease detectives who will work with their Indian counterpart, the National Centre for Disease Control (NCDC).

“The main objective of the government is to slash the rate of new infections. For that to happen, we need to understand where and how infections are spreading, and why they aren’t spreading elsewhere.

Till now, the NCDC and other central health agencies have collated massive amounts of data from across the country. We are using that data to choke the spread of the virus and the US CDC team, with a good track record in that area, will be very useful,” a senior health official said.

These officials will sort through that data and review existing models of India for the spread of the pandemic infection.

The team is expected to visit covid-19 hotspots and go through weather, demographic and environmental data to know how the virus is spreading.

As per some reports, the EIS team will work with Indian experts who are associated with surveillance and epidemiology, laboratory services, and more.

However, the EIS officers are here not just for managing the runaway infection rates, but these CDC officials will stay on in India for their long term goal to control the pandemic situation.

The WHO has initiated a COVID-19 Surveillance Project in India in partnership with the Ministry of Health and Family Welfare. The data gathered through full-scale surveillance will be used to make future Indian strategies for containment in India.

Unapproved Vaccines in US to be dumped on Indians

The EIS team is part of the American help to India. The US is planning to dump 60 million doses of the AstraZeneca vaccines on India to help us fight COVID-19.

These AstraZeneca vaccines however are unapproved for use in the US and hence the unwanted stock is being offloaded on Indians.

Moreover, this comes at a time when numerous European countries have stopped or suspended the use of AstraZeneca’s vaccine for causing bood clots and are launching lawsuits against the company.

It arose from biological warfare concerns relating to the Korean War.

How reliable is CDC’s advice?

The Association of American Physicians and Surgeons (AAPS) shared an editorial last year on “Bias and Disturbing Conflicts of Interest” at the CDC, and noted:

“In 2016 a group of more than a dozen senior scientists at the CDC lodged an ethics complaint alleging that that the CDC was being influenced ‘by corporate and political interests in ways that shortchange taxpayers.’

They noted ‘the pervasive nature of unethical practices throughout all levels at the CDC,’” AAPS wrote.

The author of the editorial, the editor-in-chief of the Journal of American Physicians and Surgeons, Lawrence R. Huntoon, M.D., Ph.D., concluded, “The CDC has a long history of bias and troubling conflicts of interest. This history calls into question the scientific validity of recommendations made by the CDC.”

Huntoon noted, “In 1983, the CDC became authorized to accept ‘gifts’ from industry and other private parties,” and that the creation of the non-profit CDC Foundation in 1992 “greatly expanded the CDC’s ability to accept private funding.”

“As donations to the CDC Foundation started pouring in, the door to conflicts of interest and corruption was opened wide. The CDC accepts millions of dollars in ‘conditional funding’ from entities, including pharmaceutical corporations. This funding is ‘earmarked for specific projects,’” Huntoon continued.

As an example of one such conflict of interest, Huntoon recounted how the CDC Foundation “accepted conditional funding” from the pharmaceutical and diagnostics company Roche “for the Take 3 flu campaign.”

The CDC thereafter cited a study sponsored by Roche in support of its recommendation of influenza antiviral drugs (e.g. oseltamivir), claiming the study was independent.

However, “All four authors had financial ties to Roche, Genentech, or Gilead (the first two sell oseltamivir and Gilead holds the patent),” Huntoon explained.

CDC is a Vaccine Company

Robert Kennedy Jr. has also blasted the CDC for corruption. “The CDC is actually a vaccine company,” he told RT America in 2020.

“The CDC has a total budget of about $11 billion a year, and $5 billion of that buying vaccines from those four companies making sweetheart deals. And then they distribute those vaccines to the American public,” Kennedy said.

“The CDC also owns patents on many of the vaccines. In fact across the HHS, which is the mother agency (of) FDA, CDC and NIH, which all regulate vaccines, different parts of the vaccine industry are all parts of HHS, and those agencies are allowed to hold patents on the vaccines that their scientists work on, and then collect royalties.”

“And in fact, officials in those agencies, who worked on the vaccines, can also own part of the patent and collect royalties of up to $150,000 a year. So every bottle of Gardasil that is sold, HHS is making money on it. They make tens of millions of dollars a year.

What is also of concern is that the CDC was banned by the Indian government in late 2019 for secretly funding bioweapons research in India.

The fact that an under-qualified private laboratory was secretly handling a dangerous virus under government’s nose at the behest of a foreign agency raised major concerns within the health ministry apparatus.

Earlier in February last year the Indian government launched an investigation into another secret research being conducted on bat hunters in the eastern Indian state of Nagaland, funded by the US Department of Defense in collaboration with Wuhan Institute of Virology and the Bill and Melinda Gates Foundation.

The matter is more complicated with the fact that the CDC has a checkered history in India. The Indian defense establishment believes that the CDC was involved in the plague outbreak in the western Indian city of Surat in 1994, which they consider to be a case of bioterrorism.

The CDC is also involved in the suppression of independent voices raising criticism and facts relating to the vaccines advocate by it.

Recently, a so-called independent fact-checker website FactCheck.org was exposed to be funded by the same $1.9 billion vaccine lobby group that it is supposed to check.

The site is a Facebook partner whose articles are used to censor critical voices on the social media platform. In a blatant conflict of interest it is headed by the former CDC director.

For extensively exposing the Vaccine lobby, GreatGameIndia is being actively targeted by the Atlantic Council which operates the web of fact-checkers and being accused of spreading misinformation for the flimsy reason that our tweets are being shared widely.

We need your support to carry on our independent and investigative research based journalism on the Deep State threats facing humanity. Your contribution however small helps us keep afloat. Kindly consider supporting GreatGameIndia.