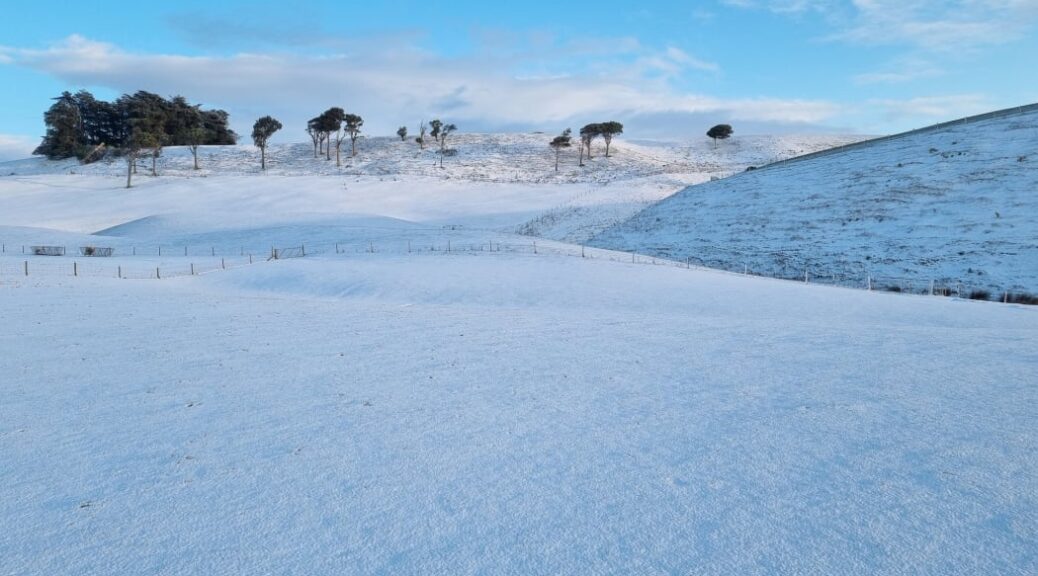 This is INDIAN media.

You will NEVER EVER get any news or context from the New Zealand media like this.

The conditions we are seeing here are disastrous and unprecedented.

In New Zealand, the Turoa ski area has closed three weeks early early as there’s not enough snow. This video looks at how this disastrous season is raising questions about future of skiing and snowboarding in a nation known for an outdoor adventure destination.

On the Farm – a wrap of farming conditions around NZ

Farmers’ winter woollies are still at the front of the wardrobe after this week’s polar blast which sent snow to sea level down south and kept paddocks further north sodden. Frost-fighting helicopters have been in the air keeping expenses high for orchardists and vintners. Listen to On the Farm for more on conditions on farms and orchards around the country.

The effects of this week’s polar blast were even felt in Northland which had a seven degree start to Thursday. Our contact near Whāngarei has had eight paddocks out of action during the wet winter and it’s still too wet to take the bike through places. There’s said to be phenomenal grass growth across the region. The animals are starting to shed and show off their summer coats. Some cattle have been affected by kikuyu poisoning – during certain times a toxin in the grass can kill the animals – but our contact says they’ve turned the corner and are ready for some warm spring sunshine.

Around Pukekohe rainfall cleared to calm, cloudy days until Thursday. Then strong, cold, crop-damaging winds moved quickly over the district. On Friday morning, low temperatures brought the risk of frost. Some kiwifruit orchards were protected with a helicopter before dawn.

Cold and extremely wet is how most are feeling in Waikato. About 110mm of rain has fallen this week. The endless downpours are putting farmers behind the eight ball with no warming signs of spring. Crops are later than usual and there is below average grass cover. Farmers are struggling with calving conditions less than ideal. An asparagus grower is holding out hope his early positive start to the season won’t be disrupted by the unusual cold.

Pongakawa in Bay of Plenty had over 100mm more than normal in September and June and July were both saturating months too – it’s meant some paddocks in low-lying areas are still full of water. One contact says the Bay has such fabulous soil it can handle the rain, but a bit too much is being asked of it. Bud break in kiwifruit is by and large late thanks to the generally warm winter. The harvest season for avocados is underway but again, the rain is causing issues as fruit are sensitive to damage if wet and susceptible to rot.

Gloomy and relentless wet weather isn’t doing well for spirits on the East Coast. While the weather has been mixed this week, even a little bit of rain is making things soggy. It’s hard to get many things done or think about summer crops. Sheep farmers are struggling to get their docking done without fine days  – a rarity for this time of year. But as one contact puts it there’s no bad weather, just bad gear.

Sleet hit the Manawatū region this week. Farms are still pretty wet underfoot making challenges left, right and centre. Although animals cope in the cold, farmers are hoping for some sunshine to pep them up. While grass growth isn’t too shabby in the region, it’s an issue getting heavy machines onto the paddock … they leave big muddy tracks behind them.

Cows are supposed to be reaching their peak milk production this time of year. Photo: Leah Tebbutt

Snow made a brief statement in Taranaki this week with Stratford, Eltham and Manaia all reporting a dusting on Thursday morning. The cold blast is a contrast to the reasonably high temperatures lately. Coastal areas across the region would usually be well into making silage this time of year, but the wet and now cold has stumped grass growth. Milk production is down six per cent, when it would normally be approaching its peak.

A Wairarapa winemaker described the conditions this week as interesting. It’s been hard to know what to expect each day. The region does see the odd frost this time of year but it’s the constant rain that’s kept people on their toes. Shoots are only small on the vines so they are braving the conditions well. On Thursday farmers had sleet and hail and, in higher paddocks, snow to contend with.

A skiff of snow on the eastern hills of South Wairarapa after this week’s polar blast Photo: RNZ/Sally Round

Frost protection is on kiwfruit vines in Motueka with fingers crossed the heavy frost and a smattering of hail hasn’t caused too much damage. Early season apple crops are right in the middle of flowering but the wet has kept the bees away.

Grape growers in Marlborough have been on edge this week. About 60 helicopters were seen in the sky on Wednesday night working to push warmer air down to the vines below to keep it from freezing. The cool air coming from the south is gnarly, as one contact says, and as soon as the leaves get frozen and brown that’s it – it will totally bowl the crop for the next year. The sauvignon blanc variety is particularly vulnerable this early but the pinot noir and chardonnay also need protecting. Our contact says it would take a minus two degree frost to do some significant damage.

Snow fell across Canterbury this week to sea level. Grass growth remains very slow with many still feeding out. Hopefully things turn and warm up soon. Winter trading lambs are heading off farm as spring crops go in and the returns while still very good are back from last year’s highs.

There was a frost and a skiff of snow on the hills at a farm at Whataroa on the West Coast this week. Milking is going well but there’s not a lot of feed around. They’re resowing crops and getting heifers ready for mating.

Snow blanketed parts of the South Island this week, even down to sea level Photo: Supplied / Ben Dooley

A Central Otago winemaker says in his 30 years, this week’s blast is the most unusual weather event he’s seen for the time of year. He’s even faced snow in November  but never experienced as much cold for such a continuous amount of time – it’s as bad as it gets, he says. Money is pouring out of bank accounts to keep helicopters running and prevent frost damage.

In the deep south, at Waimahaka, a bitter wind had dissipated by midday on Thursday. Snow settled but was not too deep. Thankfully lambing is virtually over on our contact’s farm. Sights are set on tailing beginning next week and working the ground for green feed once the soil dries up a bit

This report is from a month ago

NIWA’s climate scientists can now confirm what you may have suspected. After carefully poring through more than a century’s worth of data, it has been officially determined that winter 2022 was Aotearoa New Zealand’s warmest and wettest on record.