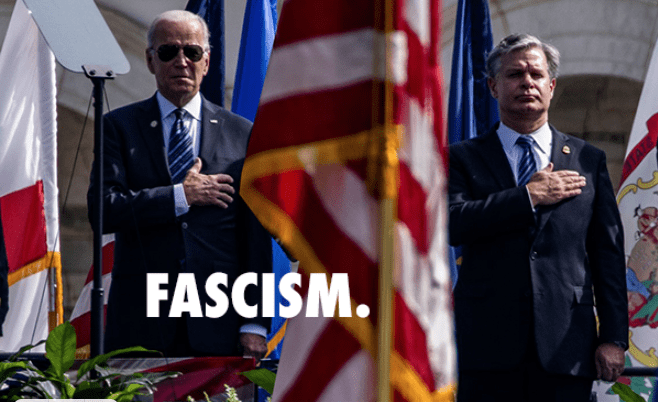 Something strange is happening: the Democrats and their mainstream media partners – are all foreshadowing delays in vote counting. Will this be a rerun of the the 2020 Presidential Election debacle?

The same situation is also unfolding in Brazil, where the Biden Administration has been openly engaged in election interference, presumably to install Washington’s favored challenger Lula de Silva into office.

The details of these shocking relations are detailed by Fox News host Tucker Carlson who believes that, “The left has run this country into the ground.” Watch:

As GOP Surge in Polls, Democrat MSM Begin Throwing Biden Under the Bus

As the increasingly precarious octogenarian President continues to sink in the polls, many Democrats are now panicking in the horror that Biden might drag most of their other candidates down in tomorrow’s Midterm Elections.

Team Blue are already pivoting, as Biden’s disastrous mental state and repeated lies are finally catching up to him.

Hence, there’s now a growing chorus of partisan operatives in media who are seizing on this opportunity to throw him under the bus.

Indeed, open season on Joe has only just begun, and if he receives the proverbial boot midstream, you can be sure Kamala won’t be far behind him. Republicans have momentum heading into the 2022 midterm elections, according to numerous forecasters. At the same time, several key Democrat-friendly media outlets appear to suddenly have lost faith in President Joe Biden.

Recent analysis by Roll Call found that there have been 22 House rating changes – 20 moved toward Republicans.

A new NPR/PBS/Marist poll revealed that the GOP has an enthusiasm advantage over Democrats in the midterms. Interest in the midterm elections is 68% for Democratic voters versus 84% for Republican voters.

Progressive outlet The Guardian conceded, “With just a few days left before polls close in America’s crucial midterm elections, Republicans appear better positioned than ever to regain control of the House of Representatives and potentially the Senate as well.”

Political betting market PredictIt is giving the GOP a 74% chance of taking back control of the U.S. Senate. Democrats had been favored as recently as Oct. 16, but the momentum from the overturning of Roe v. Wade slipped as Americans prioritized issues such as the economy and crime.

CNN noted President Joe Biden’s concerning approval rating, “His approval in Gallup’s poll stood at 40%, which is the second worst for an incumbent president in a midterm since 1974. It is the worst for a first term incumbent. Biden’s disapproval rating was 56% in the survey.”

“No first-term president whose approval rating was below his disapproval rating in a midterm since 1974 has seen his party end up with more than 200 seats in the House,” the outlet added.

On the heels of the predictions that Democrats are in legitimate danger of losing both the House and the Senate, DNC-friendly media outlets appear to have turned on Biden and levied criticisms toward the president.

The New York Times took aim at Biden’s “exaggerations” of his economic achievements. The New York Times’ official Twitter account promoted an article with the caption: “As the midterm elections near, President Biden has increasingly made exaggerations or misstatements about his influence on the U.S. economy and his policy record.”

The article began, “President Biden and his administration have told it in recent months, America has the fastest-growing economy in the world, his student debt forgiveness program passed Congress by a vote or two, and Social Security benefits became more generous thanks to his leadership. None of that was accurate.”

The Times slammed Biden for having “recently overstated his influence on the economy, or omitted key facts.”

The left-leaning publication called out Biden for taking credit for getting an increase in the Social Security checks of seniors. However, the benefit was an automatic cost-of-living increase spurred on by record inflation and not from Biden’s goodwill.

The New York Times also exposed Biden for applauding himself for decreasing the federal budget deficit by $1.4 trillion this year. But Biden failed to mention that the deficit was so high because of the $1.9 trillion pandemic aid package that he signed in 2021.

The Times added, “But as the United States has struggled to contain inflation, the Biden administration has at times resorted to cherry-picking the most favorable data points or leaving out crucial context.”

The New York Times corrected Biden on a statement he made in September when he said gas prices were averaging below $2.99 a gallon in 41 states and the District of Columbia – the prices were actually $1 higher.

Another New York Times article published this week criticized Biden for advising Americans crippled by soaring food prices to simply eat no-frills breakfast cereals.“By the way, the food prices — the main driver of food prices — is not the price of beef and eggs, etc., although they’re up. It’s packaged goods, packaged goods,” Biden said. “You’re going to see people not buying Kellogg’s Raisin Bran. You’re going to see them buying other raisin bran, which is going to be a dollar cheaper.”

The Times commented, “Needless to say, eat generic raisin bran is not exactly a poll-tested, winning message. Clips of that comment went viral on the right, racking up tens of thousands of views on conservative YouTube and TikTok channels.”

But it wasn’t just the New York Times that shined a spotlight on President Biden’s misinformation and lack of enthusiasm.

The Democrat-friendly Washington Post highlighted how Biden is struggling to energize crowds ahead of the midterms.

“His delivery was often halting and at times confusing — at one point he referred to this era as ‘the 20th century going into the second quarter of the 21st century’ — and at the end he thanked the crowd, some of whom had left during his remarks, for being ‘a very patient audience, especially standing there all this time,’” the article stated.

The article compared Biden’s lackluster speech to a “rallying” event led by Barack Obama. The article also noted that Biden was speaking in Florida – where Democrats don’t appear to be competitive in the races. Meanwhile, Obama was in the critical battleground state of Nevada.

“In addition to Florida, Biden this week is traveling to New Mexico, California and Illinois,” the article said. “He is concluding the midterm campaign season with an election eve rally in Maryland, a heavily blue state that has no races that Democrats are concerned about.”

The article read, “Even some of those who attend Biden’s rallies say he is not an energizing force for the party.”

Marvin Wilson, a 51-year-old field organizer for the Florida Democrats who attended Biden’s rally, told the Post of Obama, “He’s more energetic. He’s a better communicator. He’s more energizing, and he draws your attention. The president doesn’t do that.”

Last week, it was revealed how corporate operatives from Facebook, Twitter, Reddit, Discord, Wikipedia, Microsoft, and LinkedIn and others, led by the recently fired head of “trust & safety” political censorship department at Twitter, Vijaya Gadde, held regular clandestine meetings with partisan officials at the Department of Homeland Security (DHS) and the FBI – to discuss ways in which Big Tech firms could assist the Biden Administration in censoring the opinions and views of American citizens. This was done on an industrial scale, and should be viewed as a direct attack on the First Amendment to the United States Constitution, and also as an affront to the free press.

This is only the beginning. As the NY Post confirms below, the story gets worse. This unchecked abuse of power by government officials and their corporate partners should go down as one of the most shameful episodes in modern American history… The more we find out about the collusion that has been going on among the Biden administration, the security agencies and Big Tech, the more alarming it is — and the more unrepentant they are.

The latest bombshell from the Intercept, based on communications unveiled in the federal lawsuit Missouri v. Biden, shows that the Department of Homeland Security has been having monthly meetings with Facebook and Twitter to pressure them to censor social media posts about topics such as the botched withdrawal from Afghanistan, the origins of COVID-19, the efficacy of COVID vaccines, racial justice and US support for the war in Ukraine — in other words, anything that could be detrimental to public support for the Biden administration.

We already know that the FBI was involved in efforts to censor and bury information that might have harmed Joe Biden’s candidacy back in 2020, including The Post’s exclusive about Hunter Biden’s laptop in October 2020. That amounted to election interference, which prevented the American people from doing the necessary due diligence on one of the two candidates for president. So successful was the strategy that the Biden administration appears to have expanded it.

Security agencies have switched their attention from combating foreign disinformation to censoring the speech of American citizens who dissent from the government-approved narrative. No matter that free speech is protected by the First Amendment; if the Biden administration doesn’t like the speech, it labels it “Misinformation, Disinformation and Malformation,” and it is deputizing the FBI and DHS to strong­arm Big Tech to censor it and de-platform serial offenders.

It doesn’t matter what brand your politics is, this is Stasi stuff.

DHS also recommended the use of third-party nonprofit groups as a “clearinghouse for information to avoid the appearance of government propaganda,” the Intercept reported.In the spy business, that is what is called a “cutout,” points out John Schindler, a former senior intelligence analyst with the National Security Agency. In other words, using a “deniable intermediary” legally to spread the White House’s propaganda.

A perfect example of how the censorship regime works is the Hunter Biden laptop. Two FBI agents — Elvis Chan and Laura Dehmlow — have been identified in documents uncovered by the Missouri lawsuit as pressuring Facebook to suppress The Post’s accurate and factual reporting.

We know the FBI at the time was spying on Rudy Giuliani’s online cloud with a covert surveillance warrant. Therefore, it had access to his emails in August 2020 from computer store whistleblower John Paul Mac Isaac and to my text messages discussing when The Post would publish the story. It sure looks as if the FBI deliberately pre-censored a legitimate story for a political aim.

An upcoming book by Mac Isaac, the owner of the now-defunct Delaware computer repair shop where Hunter Biden abandoned his laptop in April 2019, sheds more light on this deep-state election interference…