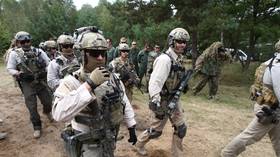 The US will not make any concessions to Russia on potential security guarantees, and the only possible way to make bilateral agreements will be mutual steps to benefit both nations, the US State Department said on Monday.

Talking to gathered journalists at a press briefing, State Department spokesman Ned Price also added that Washington would consult closely with its partners, including Ukraine, before making deals with Moscow.

His comments come less than a week after US Secretary of State Antony Blinken met with Russian Foreign Minister Sergey Lavrov in Geneva for consultations over security guarantees.

“The key point in that is that any steps that we would take would not be concessions,” Price said. “They would need to be on a reciprocal basis, meaning that the Russians would also have to do something that would help improve our security – our security posture.”

At the end of last year, Russia published drafts of proposed treaties it had sent to NATO and the US. The documents include a long list of security guarantees sought by the Kremlin, including a demand that NATO signs a legally binding agreement not to expand eastwards. The proposals also include a clause on banning the placement of missiles near Russia’s borders and the withdrawal of NATO soldiers to pre-1997 positions. Discussions over the propositions began in January.

Despite agreeing to consultations, Washington has insisted that many of Moscow’s proposals will simply not be considered.

“We were firm, however, in pushing back on security proposals we have heard from Moscow that are simply non-starters for the United States,” he said, noting that the US would never agree to ban Ukraine from joining NATO but would consider various reciprocal agreements on missiles and transparency of troop movements

For what it is worth – from Hal Turner

For what it’s worth, I got a call today from a guy whose boss worked with an old Intel Guy.  The Intel guy now does security for the very wealthy muckity mucks in Florida.

According to the guy who called me, the old Intel guy called his boss and told him “Whatever supplies, food, meds, you need, get them TODAY.“

I have a bad feeling. Russia/Ukraine/NATO?   China/Taiwan?  Israel/Iran?  All of the above?  Maybe attacks here in the US?   I just don’t know.

Russia has deployed 75% of its combat power to the Ukrainian border, even redeploying units 4,000 miles from Ulan Ude near the Chinese border to Gomel, Belarus. Do not be in any doubts about how incredibly serious this is. Why it’s not on every front page, is beyond me.

Just passing this along .