From the ever-dependable Stephen Lendman, from March 27. 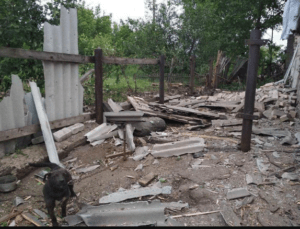 The Biden regime and Congress approved a steady flow of weapons to fascist Kiev for US orchestrated war on Donbass in Ukraine’s southeast.

What’s going on has nothing to do with modernizing and strengthening Kiev’s defense capabilities.

It has everything to do with Kiev aggression on Donbass residents who refuse to accept fascist rule.

Intermittent conflict is in its 7th year with no resolution in prospect because bipartisan US hardliners want endless war near Russia’s border, not peace.

The Donetsk People’s Republic in Donbass explained how costly war has been for the DPR and its people, saying:

“(A)ccording to preliminary estimates, the damage sustained by the Donetsk People’s Republic as a result of Ukraine’s military aggression amounts to more than 200 billion Russian rubles (about $2.6 billion).”

“Assessment of damage is complicated by the ongoing hostilities.”

“Shelling continues along the line of contact, and, therefore, the commission cannot visit the area and its specialists cannot make their final calculations.”

The most recent ceasefire was agreed on last July — following a previous one a year earlier.

“Being informed about the planned transits of humanitarian convoys of the Office of the UN High Commissioner for Refugees and the ICRC to the territory of the Donetsk and Lugansk people’s republics (DPR and LPR), the Ukrainian side has staged a thoroughly planned and targeted inhuman action.”

At the same time, they’re shelling “the settlement of Yelenovka, where a humanitarian convoy was to cross into the republic via the Yelenovka-Novotroitskoye checkpoint.”

“We see the blocking of humanitarian deliveries by the Ukrainian side as cynical and going against all international rules and principles.”

Hostile actions by Kiev are orchestrated by the US.

Russia’s representative to the Contact Group on Ukraine for conflict resolution Boris Gryzlov slammed the US installed Kiev regime, saying:

For the past seven years since the Obama/Biden coup, “Ukraine has been using all possible pretext to dodge its commitments on direct dialogue with Donetsk and Lugansk on the territory’s future regime as a key subject of peace political settlement.”

“This time, it used as a pretext an ultimatum condition on the exclusion of a Donbass society representative from the discussion of political aspects of settlement.”

“Kiev continues to refuse (to agree on) the coordinated opening of two checkpoints in the Lugansk People’s Republic (LPR) under coordinated parameters of their operation.”

A number of Russian officials were targeted. US-installed officials in Kiev have been sanctioning Russia since spring 2014.

On Thursday, Zelensky designated Russia a “military adversary” of Ukraine by decree, accusing Moscow of being an “aggressive foreign and military policy” that may lead to conflict in Europe’s heartland.

He falsely called the Russian Republic of Crimea Ukrainian territory.

His decree stressed that NATO membership is one of his regime’s key foreign policy goals, upgrading its partnership status.

Nations involved in “defending (their)  sovereignty and independent foreign policy course are subjected to economic blockade, illegitimate unilateral sanctions, while their domestic affairs are openly targeted by interference.”

“This vicious practice runs counter to norms and principles of the UN Charter, and it should be ended.”

Moscow slammed the steady flow of US and other Western weapons to Kiev for warmaking — on the phony pretext of national defense.

Its first since replacing Trump, more of the same will likely keep flowing  for endless war in Donbass.