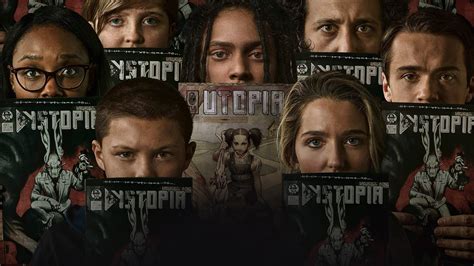 Here is a bit of predictive programming.

This series, which appeared on Amazon Prime, portrays a mad scientist who reveals a plan to unleash a fake pandemic to frighten people into lining up for a vaccine which will make people sterile for 3 generations.

An Amazon series released at the height of the COVID pandemic revolved around a plot where a virus is deliberately released and then a vaccine offered to a terrified public as a form of population control.

Utopia is a remake of the UK Channel 4 series originally released in 2013 and stars Jessica Rothe, Rainn Wilson, and John Cusack.

The plot centers on a group of comic book fans who discover an unpublished manuscript for a graphic novel which turns out to be a real life plot to fake a global pandemic in order to thin the earth’s population.

People are killed or poisoned to convince them that the virus is real before a traumatized population is convinced to take a vaccine which sterilizes the vast majority of them, lowering the planet’s population to just 500 million people total in a single generation.

The comic book fans are hunted down by a shadowy deep state organization after attempting to expose the conspiracy.

The edit of Utopia was only finished in April 2020 at the height of the first wave of the pandemic and was subsequently released in September 2020.

Indeed, the plot of the series is so close to what some “conspiracy theorists” claim is the real agenda behind the COVID-19 pandemic, that outlets like Slate said it should have never been released.

“It’s impossible to enjoy a story where the heroes persuade themselves that shadowy forces have manufactured a phony pandemic to trick people into taking a dangerous vaccine when those exact beliefs are helping to kill hundreds of thousands of Americans,” wrote Matthew Dessem.

The New York Times also reported on how author and showrunner Gillian Flynn knew that Utopia had “unsettling COVID parallels,” but that she wrote it before she knew anything about QAnon.

Suffice to say, the show was canceled in November 2020 after Amazon opted not to commission a second season.

Maybe it was just too close to the bone.

Here is a segment from the original British series