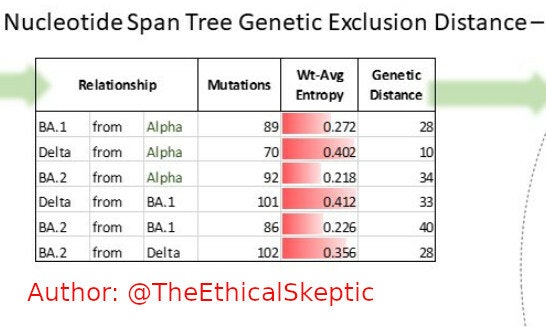 “Vaccine Against Variants” is Impossible and Will Endanger the Naturally Immune

Creating Another Vaccine will Lead to Disaster

This article will explain that, while any talk about effective variant Covid vaccines is a pipe dream, variant vaccines will ENDANGER THE UNVACCINATED, who have decent natural immunity now, while not solving anything for the vaccinated.

Remember the original rush to create the “Covid Vaccine”? Moderna claimed that it developed mRNA-1273 in just two days. (If you still believe that it took two days, buy a bridge from me, or read this article of mine from Feb 2022).

When we realized, in 2021, that the original vaccine does not work, much talk began about creating “variant vaccines”. It should be easy, right? If the first vaccine was designed in “2 days”, surely the updated vaccine could be done in maybe 3-4 days at most?

About half a year later, here we are, with no vaccine in sight, and lots of failures.

What is happening? Why no rapid “triumph of science”? Why no easy “Omicron vaccine”? Let’s explore.

Why “Omicron Vaccine” is Impossible

Before we start looking into “Omicron vaccines”, let me mention that creating a good vaccine, that prevents illness, and has an acceptable safety profile, is extremely difficult and takes many years. Many pathogens resisted all attempts to find vaccines that work against them. Chief among them are the HIV virus, dengue virus, and coronaviruses. There never was a successful coronavirus vaccine. Of all known diseases, only one disease, smallpox, was declared to be “eradicated with vaccines”.

This is the general background.

The “Covid vaccine” released in late 2020, despite having an unacceptable safety profile, had at least a brief few-months period during which it showed moderate effectiveness, which deteriorated rapidly as time went on. Covid Vaccine is also an unsuccessful experiment, however, it showed some brief signs of working.

No “Omicron vaccine” will show any effectiveness at all.

There is no Single “Omicron Variant”

The main reason is that there is no one “Omicron Variant”. Sars-Cov-2 is mutating out of control, faster than ever, and recent variants are very genetically distant from each other.

The so-called “Omicron Variant” is a very inclusive term that includes “every Sars-Cov-2 descendant after Delta”. It is best to think about it as a marketing term giving an excuse why Covid vaccines do not work, rather than as a scientific term.

For example, the Ba.1 and Ba.2 variants are MORE distant from each other, than they are from any past Sars-Cov-2 variants.

The explosion of mutations was not exactly unexpected. Geert Vanden Bossche wrote a prescient letter, proven to be prophetic, that vaccination will drive new variants.

In addition, interestingly, Sars-Cov-2 has an overlooked genetic designer “feature” that did not exist in SARS-Cov-1, which makes spanning new viral variants easier.

Was Sars-Cov-2 DESIGNED to Spawn so Many Variants?

Therefore, unlike in 2020, there is no single variant against which to make a “vaccine”.

They are at a Dead End

The following are insurmountable problems for any “variant vaccine”:

The last point is familiar to the regular readers of my substack but is worth briefly repeating. It turns out that upon “breakthrough infections”, the vaccinated do NOT acquire multifaceted, natural immunity like the unvaccinated do.

Instead, the vaccinated people, having their immune systems saturated and boosted with the obsolete Wuhan spike protein from 2 years ago, simply make more of the same old antibodies to that obsolete protein, even when challenged with newer antigens.

This is not a “new and unexpected” problem. Moderna had access to reinfection data during their Phase III trial and knew that vaccinated people do not develop broad immunity. Despite having access to that information, Moderna never disclosed it to the public.

To summarize, any discussion of “updated Omicron vaccine” is simply empty talk. I would not discount the possibility that Pfizer and Moderna would concoct something just to sell more doses, but be aware that any such concoction would be “dead on arrival”.

The above was just an introduction to my most important point below.

Variant Vaccines will Endanger the Unvaccinated

As Geert predicted, most changes in Sars-Cov-2 involve spike protein, which is the feature evolutionarily pressured by spike-based “Covid vaccines”. As the masses of vaccinees developed antibodies to Sars-Cov-2 spike protein, that instantly forced viral evolution towards more mutations in the spike, to evade spike vaccines. We ended up where we are, with endless variants having mutated spike genes, infecting and reinfecting the vaccinated.

The immune systems of the unvaccinated, upon infection, developed natural immunity to much more than “spike”. For example, among numerous other antibodies, we the unvaxxed have “nucleocapsid” antibodies, as explained in my above-quoted Moderna article, and much more. This is why most unvaccinated people have lasting immunity to Sars-Cov-2. Yours truly, for example, had COVID in Nov 2020 and not again so far, despite zero mitigation measures.

All this “happily unvaccinated” immunity may end soon, because of efforts to create new vaccines targeting new antigens. As I explained, these efforts are unlikely to lead to mass vaccinations, but if they do, we are in trouble:

There is now talk about “variant vaccines” targeting non-spike proteins that remain relatively un-mutated. But they are not mutated precisely because they were not used as a basis of vaccination!

What will the result of this be? If such vaccines for non-spike Sars-Cov-2 proteins get created, and if they create evolutionary pressure on the virus to evolve, the pathogen will eventually evolve enough to mutate those areas enough to evade vaccine antibodies.

But that could make the virus evade the natural non-spike antibodies that I, and most of my unvaccinated Covid-recovered readers, have that keep us healthy in this mayhem!

So the result of these eventually leaky vaccines, just like the spike vaccines, will be that the vaccination will be as useless as before — but the healthy unvaccinated people will be left with no defenses!

The only good result for this would be to satisfy schadenfreude among some upset vaccinators.

“We finally found a way to make the unvaxxed sick again”.