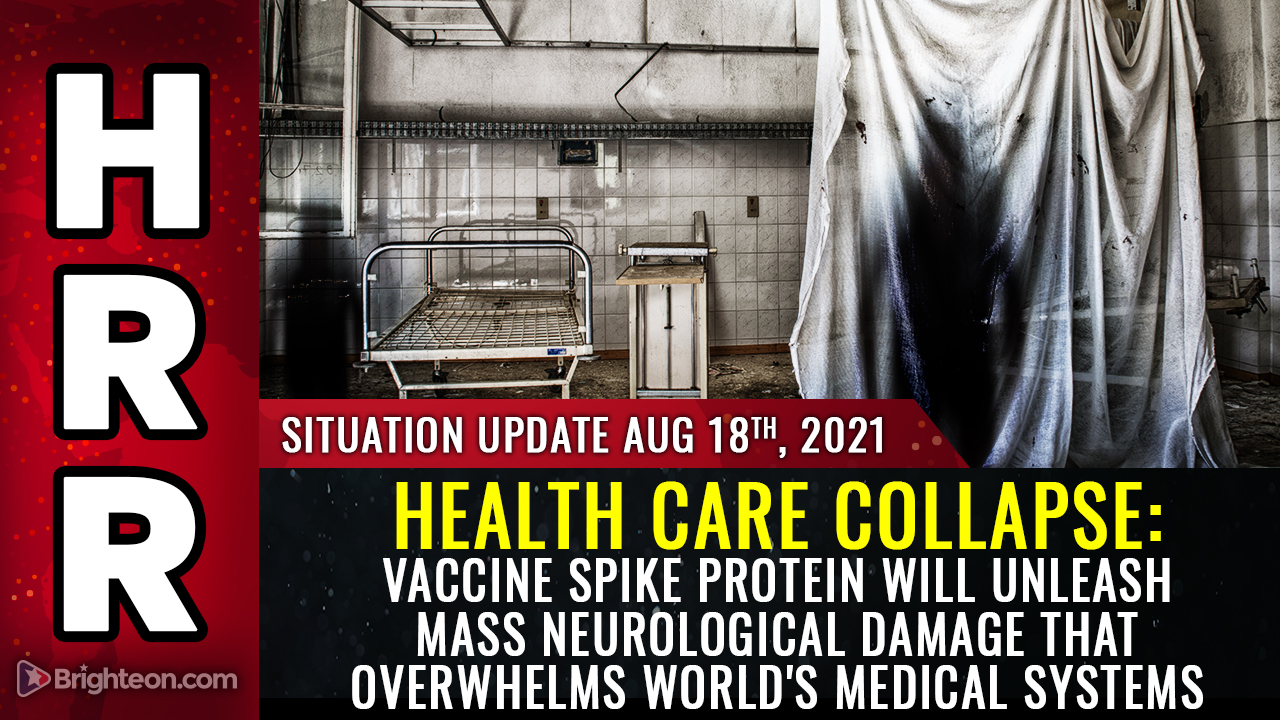 (Natural News) Imagine living in a world where every hospital is overrun with vaccine-injured patients of all ages, suffering from extreme neurological damage that places previously able-bodied people in the category of requiring constant medical assistance to survive. Imagine so many people dying from covid spike protein injections (“vaccines”) that entire apartment buildings are abandoned and condemned even with the spike protein-infested dead bodies inside because no one is willing to remove the dangerous bodies.

This dark vision of society may soon come to pass as the full effects of spike protein damage are realized. With nearly 2.5 billion around the world already injected with spike protein bioweapons, and with nearly 200 million Americans having lined up to take the shots, the world is rolling the dice on a global medical experiment that risks the survivability of entire nations (if not civilization itself) in the years ahead.

We already know that as many as 500,000 Americans have already been killed by the “clot shot,” but importantly, those are merely the short term vascular effects from blood clotting. These deaths do not take into account the long-term, slow-acting neurological damage that appears to resemble the human form of Mad Cow Disease, a prion-induced protein folding disorder that irreversibly destroys brain tissue over time. In an interview conducted yesterday (and soon to be posted), Dr. Chris Shaw, an expert in neurology and elemental toxicity, warned me that widespread, accelerating neurological damage is now a very real possibility since the spike protein and mRNA particles cross the blood-brain barrier.

What happens when the brain is exposed to a weaponized spike protein, developed via gain-of-function research in a laboratory run by a communist military? (Wuhan lab, via the CCP.)

Imagine if millions of Americans suddenly collapsed to the cognitive level of Joe Biden. We might see homeless, desperate masses aimlessly wandering the streets of blue cities, crapping on the sidewalks and mumbling nonsensical things to themselves. Of course, we already see that in San Francisco and many liberal cities, but imagine the numbers of those afflicted exploding into many millions.

Even those who are closely watching vaccine injuries and vaccine deaths may be missing the longer term neurological implications of this insidious spike protein assault on humanity. What happens to society when tens of millions of people are injured or killed by a government-created biological weapon designed to attack human tissue? It seems we’re about to find out.

No matter what happens in the coming months, right now is certainly not a good time to need hospital care. We strongly urge all readers to do everything in your power to maintain a healthy lifestyle rooted in disease prevention and strong nutrition. Over the next year (or less), the health care facilities may be overrun with vaccine-damaged people, and “routine” medical services may collapse as a result.

(Natural News) For weeks we’ve been warning about a coronavirus-induced supply chain disruption that was only going to get worse before it gets better.

Well, over the past 48 hours, the situation definitely got worse. Much worse.

On Monday Natural News reported that Western supply chains were already in peril thanks to a combination of worker shortages, transportation shortages, and a shutdown of China’s biggest shipping port, which also happens to be the largest shipping port in the world.

“The world’s largest shipping port by cargo tonnage has shut down one of its key terminals following a confirmed case of Covid-19, putting further strain on the global shipping industry and disrupting supply chains,” the South China Morning Post reported as well.

“The news came as container shipping rates from China and Southeast Asia to the east coast of the United States hit a record high of more than US$20,600 per 20-foot equivalent unit (TEU) – the standard measure for freight container volume – according to the Freightos Baltic global container freight index,” the paper reported.

(Natural News) An independent analysis of the immune failure that tends to occur after someone gets “vaccinated” for the Wuhan coronavirus (Covid-19) has revealed that at least one of the causes is a buildup of vaccine-induced spike proteins inside the body.

Walter Chesnut of WMCResearch.org warns that the “robust immune response” triggered by the shots “may come at a lethal cost,” whether that manifests immediately or later on down the road.

Chesnut found after reviewing a peer-reviewed scientific study and an informative lecture that once the vaccine spike proteins really settle in and start doing what they were designed to do, an injected person’s telomerase becomes inactivated.

Telomerase, in case you are unfamiliar with it, is an enzyme in human DNA that regulates aging. As the telomeres that encapsulate DNA shorten over time, aging really starts to ramp up. This would suggest that Donald “father of the vaccine” Trump’s “Operation Warp Speed” injections are accelerating the aging process.