Perhaps Russia is undertaking a massive build-up as a DETERRENCE to Ukraine and the Biden regime?  Let us hope so! 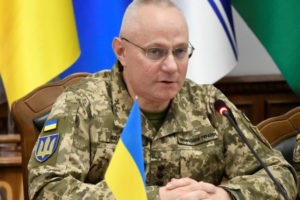 Sometimes there is an error in translation, and this MAY be one such case.

Separately in that same story, the same media outlet (LINK) THEN states “Ukraine’s Army Chief of Staff announced that the country’s armed forces will begin a full-scale offensive to destroy separatist rebels in Donbass.”

I am NOT getting reports from Intelligence Sources that any conflict has actually begun.  But comms in and out of the area are “having difficulties” which is usually a sign that something is occurring and someone is trying to keep a lid on it.

I also DO NOT have any chatter on Intel Circuits indicating conflict has begun in earnest, although there is some chatter about some skirmishes in the area, with some shots fired.

I report this because, with the Ukrainian General commenting on a “full offensive” he also admitted publicly that Ukraine now has “100,000 soldiers” massed on the outskirts of Luhansk and Donetsk, which is up ten thousand from a few days ago.

There are also statements from Ukraine that they are waiting for NATO to finish bringing in THEIR supplies . . .

Specifically, “According to some speculations, the fact that Ukrainian President Volodymyr Zelensky has not issued a decree is mainly due to the recent arrival of military equipment and weapons, including aid items belonging to the North Atlantic Alliance – NATO – is still being sent to the Donbass.”  which I found to be extraordinary, since NATO is not a sovereign government, exists only for “Mutual Defense” of its members, and Ukraine is NOT a member.  So where does NATO get off bringing in “their supplies?”

So there are real issues with just about everything taking place in eastern Ukraine and I want to give readers a sense of how close the world actually is to a MAJOR outbreak of war.

More info as I get it.

Here is the item: 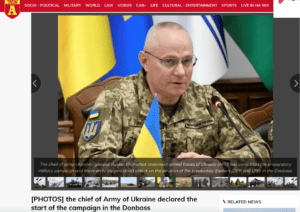 ANTD.VN – chief of the Army of Ukraine declared the armed forces of this country will start a campaign against comprehensive aimed to destroy the separatist rebels in the Donbass.