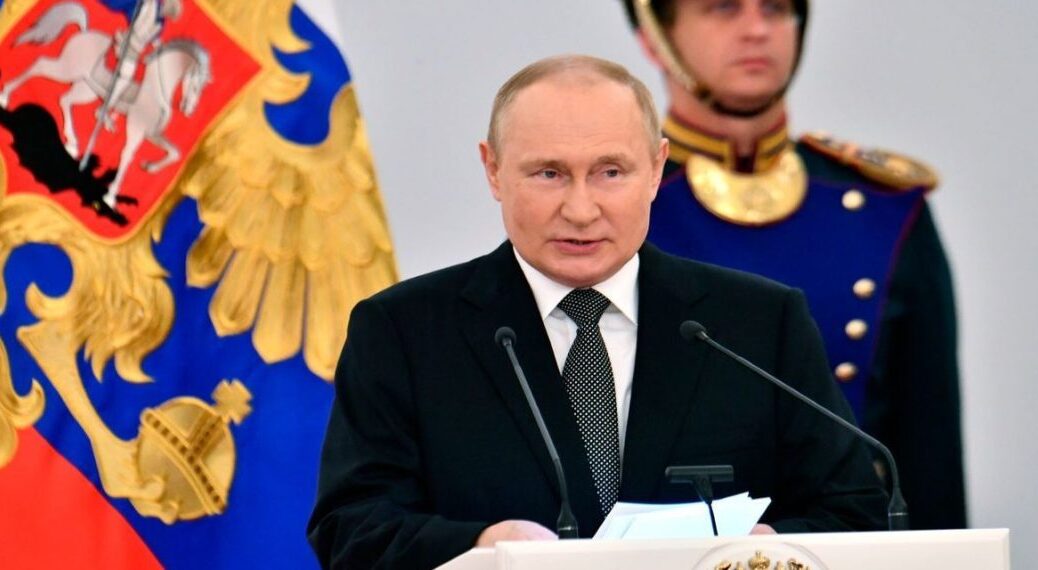 Putin’s All-Out Attack: The Grains Deal Won’t Solve Anything – How They Set Up the US-EU Food Crisis (vid)

“There is an organized plan”

The president of Russia, Putin, launched a fierce attack on the USA and the EU, accusing them of creating the food crisis. According to the Russian president  , the agreement reached in Istanbul to resume the export of approximately 20 million tons of Ukrainian grain will not, in fact, solve anything.

From what the president of Russia says, it can be seen that he did more of a “favor” to the international community by signing the grain agreement so that the US-EU could not accuse Russia of being responsible for the crisis.

According to Putin, there is an organized plan which started in 2019 at the beginning of the pandemic and worsened due to the sanctions against Russia.

Putin during his speech at a council in the Kremlin looks like he is delivering lessons in an economic school auditorium without even taking notes, something very rare for a president of any country.

B. Putin: How they created the food crisis

“They keep blaming Russia for the food crisis. You as experts will know that the crisis started from the times of anti-pandemic measures, where some developed economies abused their monopoly power, in terms of currency monopolies.

They opened the printing press in the USA and printed 5.9 trillion dollars! This corresponds to 38% of all money in circulation!

They printed them over two years, which is roughly the amount printed in the previous 40 years.

The same percentage. And in the Eurozone, they printed 2.5 trillion!

They released that money into the economy and distributed it to the world, which is not a bad thing in itself. We used a similar tactic.

But we were very careful, it was done in moderation so it didn’t lead to such a wave of inflation.

Over there, anti-pandemic measures were financed by budget deficits, which led them to buy the entire amount of food supplies from world markets.

While in previous years, the US was a net exporter of food, it is now a net importer of food. They bought $17 billion more food than they sold.

What does this say? They made problems worse for developing/poor countries and stopped their own problems. This is the result of a monopoly of the reserve currencies, the dollar and the euro.

This started in late 2019, early 2020. Then the anti-Russian sanctions worsened the situation, they made a bunch of mistakes in the energy sector, gas prices went up, and access to gas is the foundation for a lot of fertilizer.

As fertilizer has become more expensive, we’ve seen companies close, particularly in Europe, and food prices have shot up further.”

What is included in the Ukraine-Russia grain agreement?

The agreement reached in Istanbul to resume the export of around 20 million tonnes of Ukrainian grain will allow three ports in the Odesa region to be unblocked, but suitable ships and crews will need to be found – and of course insured – which is estimated to cost expensive.

What does the agreement provide?

Commercial ships will be able to move through safe corridors in the Black Sea and both sides (Russia and Ukraine) are committed “not to attack”, according to a United Nations official.

The goal is to get 20-25 million tons of grain in silos at the ports out of Ukraine as the new harvest approaches.

In the coordination and control center of the operation, which will be based in Istanbul, there will be representatives of all four sides (Ukraine, Russia, Turkey, UN). This center will determine the timetable of the ships’ routes in the Black Sea.

Ukraine considers that exports can resume from Odessa and from its “satellite” ports, Pivdeni and Chornomorsk. “We are talking about Ukrainian wheat from Ukrainian ports controlled by Ukraine,” said Paul Toure, the director of the Supreme Institute of Maritime Economics (Isemar), stressing that Mariupol is excluded, since it is controlled by the Russians.

“For this reason we are not talking about maritime trade but about an international solution to the food crisis”, he added.

What will happen to the mines?

Negotiators abandoned efforts to clear the Black Sea of ​​mines laid mainly by Ukrainians to protect their coasts. “Demining would take too much time,” the UN explained, clarifying that Ukrainian pilot ships would clear the way for the trucks in the country’s territorial waters to avoid the mines.

Turkey, however, declared “ready” to help in demining. “In case of need, it is provided (by the agreement) that demining can be done by a third country. Turkey is ready to offer its help,” said Ibrahim Kalin, the spokesman for the Turkish presidency, speaking to the private NTV channel.

According to Toure, the ships that will be used will mainly be Turkish or Greek bulk carriers since Greece, as he reminded, has the largest fleet. These ships can carry 20-70,000 tons each.

Large European container ships whose products have already been processed in Ukrainian factories (flour or pasta) could also be made available to Ukrainians.

These ships will be inspected in Istanbul before they leave for Ukraine, by representatives of the four parties, to ensure they are not carrying weapons.

Will the itineraries be insured?

A large part of the Black Sea and the Azov Sea is no longer covered by the insurance companies of ocean-going ships and goods, since the beginning of the war. The ships will therefore need “additional cover, which remains to be discussed”, explained Sylvain Godin, of reinsurance company Scor.

“The question will be raised how the insurers will calculate the risk and how they will take it. There will need to be a discussion on how to organize this (sea) corridor, the counterparties to understand well what are the security measures, the military means available to ensure that the ships will pass safely,” he explained.

How much will it cost;

Extra premiums for the Black Sea used to amount to 5-7% of the ship’s insured value, Godin said, to give an order of magnitude. Typically, cargo insurance costs between 0.2-0.5% of its value, reaching up to 1% for older ships. “It’s a huge amount!” he noted.

“When we talk about war zones, costing is done on a case-by-case basis and costs can very quickly skyrocket,” said Mathieu Berurier, the general manager of freight forwarding company Eyssautier Verlingue.

“It is critical to guarantee the safety of crews if this agreement is to be implemented quickly,” commented the International Chamber of Commerce Shipping (ICS). “The question arises (…) in what way we can effectively train the crews of the ships in the area so that the deadlines are met”, he added.

How long will the business last?

“There is still a lot of work to be done,” the ICS insisted.

According to experts involved in the negotiations, three to four more weeks are needed to finalize the details and make the agreement operational. The Minister of Defense of Russia, however, considered that it is possible to start the process “within the next few days”.