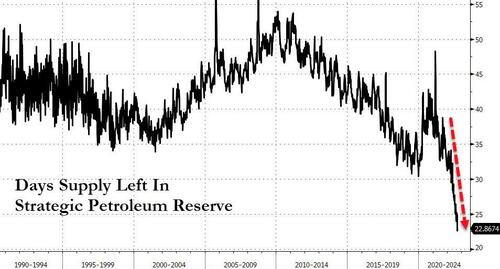 *OPEC+ IS ALIGNING WITH RUSSIA WITH ANNOUNCEMENT: JEAN-PIERRE

The Organization of Petroleum Export Countries (OPEC) met in Vienna, Austria and agreed to CUT oil production by two million barrels per day, despite strong input from the United States seeking an increase in output.

A group of some of the world’s most powerful oil producers on Wednesday agreed to impose deep output cuts, seeking to spur a recovery in crude prices despite calls from the U.S. to pump more to help the global economy.

OPEC and non-OPEC allies, a group often referred to as OPEC+, decided at their first face-to-face gathering in Vienna since 2020 to reduce production by 2 million barrels per day from November.

Energy market participants had expected OPEC+, which includes Saudi Arabia and Russia, to impose output cuts of somewhere between 500,000 barrels and 2 million barrels.

The move represents a major reversal in production policy for the alliance, which slashed output by a record 10 million barrels per day in early 2020 when demand plummeted due to the Covid-19 pandemic. The oil cartel has since gradually unwound those record cuts, albeit with several OPEC+ countries struggling to fulfill their quotas.

Oil prices have fallen to roughly $80 a barrel from more than $120 in early June amid growing fears about the prospect of a global economic recession.

The production cut for November is an attempt to reverse this slide, despite repeated pressure from U.S. President Joe Biden’s administration for the group to pump more to lower fuel prices ahead of midterm elections next month.

The White House said on Wednesday that ‘it’s clear’ the OPEC+ oil alliance ‘is aligning with Russia’ after it announced a massive production cut of two million barrels.

It stands to be a big boost for Moscow, despite the West’s efforts to choke off oil and gas revenues as a source of cashflow to fund Russia’s illegal invasion of Ukraine.

Meanwhile American drivers could face another increase in gas prices in what could end up being a massive setback for the Biden administration.

Rystad Energy AS analyst Louise Dickson was on Bloomberg TV earlier today and explained a much tighter oil market is ahead following the announcement of OPEC+ cuts.

“We’re now steering down into a much tighter oil market for the remainder of 4Q 2022, in particular December 2022, where we could see a split from a surplus to draws,” Dickson said.

He also pointed out:

“OPEC+ could in fact sort of unintentionally spur a bit of a supercycle in pricing and this is a bit of a precarious situation to put the market into”.

*OPEC+ IS ALIGNING WITH RUSSIA WITH ANNOUNCEMENT: JEAN-PIERRE

So OPEC+… Russia… China… India… Brazil… Africa… anyone else?

Lol… everyone is with Russia when Biden loses lol https://t.co/IR5v9Vz230

The Biden administration is absolutely furious with the Joint Ministerial Monitoring Committee (JMMC) of the Organization of the Petroleum Exporting Countries (OPEC) and allies, including Russia, for agreeing to slash oil production by 2 million barrels per day.

“I need to see what the detail is. I am concerned, it is unnecessary,” Biden says of OPEC+ scaling back oil output of 2 million barrels per day

Biden’s top national security and economic advisors expressed their disappointment in the OPEC+ production cuts via a statement:

The President is disappointed by the shortsighted decision by OPEC+ to cut production quotas while the global economy is dealing with the continued negative impact of Putin’s invasion of Ukraine. At a time when maintaining a global supply of energy is of paramount importance, this decision will have the most negative impact on low’er- and middle-income countries that are already reeling from elevated energy prices.

The President’s work here at home, and with allies around the world, has helped to bring dowm U.S. gas prices: since the beginning of the summer, gas prices are down $1.20 – and the most common price at gas stations today is $3.29/gallon. At the President’s direction, the Department of Energy will deliver another 10 million barrels from the Strategic Petroleum Reserve to the market next month, continuing the historic releases the President ordered in March.

The President will continue to direct SPR releases as appropriate to protect American consumers and promote energy security, and he is directing the Secretar)’ of Energy to explore any additional responsible actions to continue increasing domestic production in the immediate term. The President is also calling on U.S. energy companies to keep bringing pump prices down by closing the historically large gap between wholesale and retail gas prices — so that American consumers are paying less at the pump.

In light of today’s action, the Biden Administration will also consult with Congress on additional tools and authorities to reduce OPEC’s control over energy prices.

Finally, today’s announcement is a reminder of why it is so critical that the United States reduce its reliance on foreign sources of fossil fuels. With the passage of the Inflation Reduction Act, the U.S. is nowr poised to make the most significant investment ever in accelerating the clean energy transition while increasing energy security, by increasing our reliance on American-made and American-produced clean energy and energy technologies.

Can it be more of this?

*US HAS MADE ITS VIEWS CLEAR TO OPEC MEMBERS: BLINKEN

OPEC made its views clear to the White House as well

Maybe it was the Democrats who were ‘short-sighted’…

In 2020, Democrats blocked Trump’s proposal to buy American oil at $24 a barrel.

Yesterday, a Biden official disclosed a secret offer to buy OPEC+ oil at $80 a barrel in exchange for not cutting production.

Biden’s efforts backfired. The US is weakened.https://t.co/ygwOZqPIBk

Let’s be clear about what happened:

1. Biden destroyed America’s oil/gas industry and made us dependent on OPEC again.

3. OPEC is doing the opposite—cutting output by 2 million barrels a day.

Total failure. OPEC is laughing at him.

We detailed below, ahead of the announcement, the White House said the prospect of a production cut would be a “total disaster” and “hostile act.”

OPEC+ could be on the verge of one of the largest production cuts in two years, a move White House officials would undoubtedly have a ‘panic attack’ as they attempt to dissuade the 23 crude-producing countries and its allies, such as Russia, from making the cuts.

OPEC+ is considering cutting 2 million barrels a day, and on the smaller side, a reduction of 1-1.5 million barrels a day, delegates said. Such a move would be a blow to Washington as the Biden administration has scrambled to unleash record amounts of crude from the strategic petroleum reserve to tame soaring crude prices this summer.

“Higher oil prices, if driven by sizeable production cuts, would likely irritate the Biden administration ahead of US midterm elections,” Citi strategists wrote in a note.

Citi strategists appear correct: CNN obtained some of the draft talking points circulated by the White House to the Treasury Department this week and called the prospect of a production cut a “total disaster” and “hostile act.”

“There could be further political reactions from the US, including additional releases of strategic stocks,” the strategists added. They said the Biden administration could also push forward with an anti-trust bill targeting OPEC.

But that’s not all. According to Bloomberg, White House officials are discussing possible export bans on gasoline, diesel, and other refined petroleum with the Energy Department.

People familiar with discussions said administration officials are discussing export bans of refined products with top oil industry leaders as the risk of an OPEC+ reduction could catapult fuel pump prices higher ahead of the midterm elections in November.

And given the resurgence in crude and wholesale gasoline prices, regular pump prices are set to soar again…

Another person said the Energy Department is analyzing the economics of an export ban. Bloomberg said both people familiar with talks asked not to be identified because discussions are still private.

Despite Biden’s SPR drain, hitting levels not seen since 1984, the export ban could be the most controversial move yet by the desperate administration to tame pump prices ahead of the midterm elections next month.

Top oil execs and industry experts have blasted the proposed export ban, saying it could backfire and result in even higher gasoline, diesel, and jet fuel prices, while throwing energy markets into turmoil in Europe ahead of winter.

“Reducing global supply by limiting US exports to build region-specific inventory will only aggravate the global supply shortfall,” Woods said.

On Tuesday, the American Petroleum Institute warned any attempt to ban exports will disrupt not just global markets but harm US national security and geopolitical standing. API continued:

Banning or limiting the export of refined products would likely decrease inventory levels, reduce domestic refining capacity, put upward pressure on consumer fuel prices, and alienate US allies during a time of war. For these reasons, we urge the Biden administration to take this option off the table and focus instead on working with us on policies that will strengthen US energy security and protect consumers.

API outlined the major points from a July study via the American Council for Capital Formation about the economic impacts of a potential export ban of refined products:

1. An export ban could result in the shuttering of an estimated 1.3 million barrels per day of US refining capacity (7% of US total) due to trapped refinery production in the Gulf Coast. The loss of this capacity would likely strand a surplus of crude oil in the Central United States, halting important upstream energy production.

“There simply is not sufficient pipeline connectivity or the range of economic shipping alternatives that would be required to transport significantly more fuel to the East Coast from refineries in the Gulf, API continued, adding, “Banning exports of fuel from the United States will not eliminate this challenge or make it easier and more affordable to supply American-refined fuel to the East Coast. Instead, by cutting into global fuel supplies, it would likely raise the cost of fuel imported into the East Coast from the global market.”