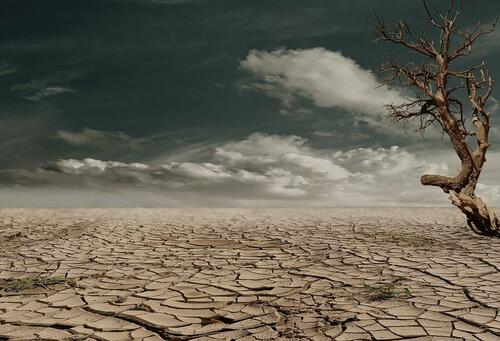 La Niña has returned for the third consecutive winter, allowing for drier-than-average conditions across America’s crop belt. Some farmers told Bloomberg that conditions are so dry that “fertilizer is evaporating from the soil, and plants are struggling to emerge from the ground.”

The odds are stacking up that this winter’s growing season in the Midwest is going to be a bad one. The latest government data shows drought is intensifying across the western half of the US. 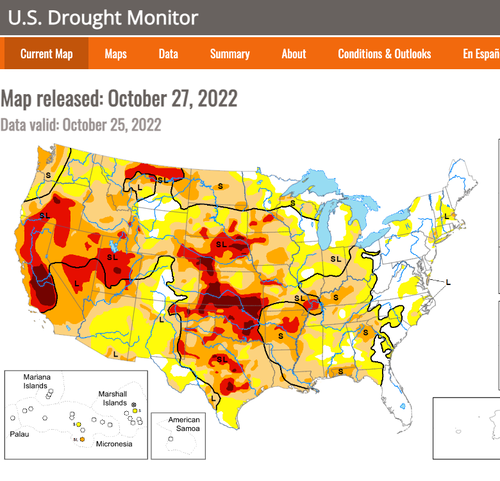 As for winter wheat, nearly 75% of the crop areas are in a drought, the highest level in decades.

Gary Millershaski, chairman of the Kansas Wheat Commission, said farmers who typically spread chemical fertilizer on their fields in the winter to allow the soil to replenish with nutrients ahead of the spring growing season are pulling back because of the fear it will just “evaporate and disappear.”

Millershaski also farms wheat and corn in the southwestern part of the state. He said he’d planted about 4,000 acres of winter wheat but only expected to harvest 1,500 because of the severe drought … that’s less than half.

“When it is this dry you don’t know if will sprout and die or come up next year,” he added.

The lack of moisture indicates that some plants may not even sprout until spring, jeopardizing yields.

Mark Nelson, director of commodities at the Kansas Farm Bureau, has already warned that the rate of emerged plants is already falling behind average levels for this time of year.

Widespread extreme drought could devastate winter wheat crops but, more importantly, disrupt farmers from spreading critical fertilizers on fields ahead of the next growing season — this could dent harvests at the end of 2023.

As a reminder, the UN Office for the Coordination of Humanitarian Affairs states, “El Nino and La Nina are naturally occurring climate patterns and humans have no direct ability to influence their onset, intensity or duration.”

Argentina’s projected wheat harvest, “is in a very critical situation, and could get worse”. announced Rosario grains exchange which cut its 2022/23 harvest forecast to 15 million tons, down from 16 million tons estimated last week

The anticipated wheat harvest, which would make this year the worst in seven years, suffered again this week when it was hit by a late frost, already damaged by drought.

Argentina produced a record 23 million tons of wheat in the last growing season.

The country is a major grains exporter, but this crop year has been hit by a drought that dates back to May, exacerbating the impact of low temperatures during the southern hemisphere spring, when many wheat fields were in key development stages.

However the Rosario exchange maintained its projections for the 2022/23 corn harvest at 56 million tons and its 2022/23 soybean harvest at 48 million tons. Producers are beginning to plant corn, and soybean sowing will start in coming weeks.

The exchange said that due to the drought farmers may opt to plant more land in soybeans, a hardier crop than corn, estimating that the planting area for the oilseed could reach 17 million hectares.

The exchange said producers so far have planted only 12% of the 8 million hectares forecast for corn, 15 percentage points behind the planting rate at the same time last season

In view of the latest figures the US Department of Agriculture revised its projection for Argentine foreign sales to 12.5 million tons, one million less than what had been forecasted in September.

SAO PAULO, Oct 28 (Reuters) – Brazil will need to seek alternative wheat sellers because Argentina’s crop failure has curtailed production and compromised its ability to export, analysts said, pointing to the United States, Canada and even Russia as possible suppliers.

Brazil is a net wheat importer and neighboring Argentina, which is currently suffering a drought, is its most important source of the cereal.

“Generally, Brazil gets about 6 million tonnes from Argentina,” said StoneX risk management consultant Fabio Lima. But now, he expects between 1 and 1.5 million tonnes of imports coming from outside Mercosur, the South American trade bloc.

Brazil is one of the world’s largest wheat importers, with domestic consumption above 12 million tonnes per year, below its output capacity.

Australian wheat farmers are preparing to gather a third straight bumper crop, but with plenty of heavy rain expected in the east of the country, growers there are bracing for a grueling and muddy harvest.

Wet conditions had earlier buoyed the outlook for wheat production in the nation, one of the world’s top exporters, with the government expecting more than 32 million tons this year after a record 36.3 million tons last season.

Australia has been emerging as a silver lining in a gloomy global wheat market, but prolonged wet weather and excessive rainfall in the country may threaten its position as a key supplier, weighing on milling wheat prospects.

Australia’s wheat harvest is set to be in full swing from the week beginning Oct. 31 amid concerns hovering over the extension of the so-called “grain corridor” in the Black Sea, a major wheat-supplying region.

Authored by Michael Snyder via The Economic Collapse blog,

We really are reaching a major crisis point.  Thanks to soaring fertilizer prices, insane weather patterns and the war in Ukraine, global food supplies have been getting tighter and tighter.  So we really needed a banner year for agricultural production in both the United States and Europe in 2022, and that is not going to happen.  In fact, unprecedented drought is absolutely devastating crops all over the northern hemisphere.  A lot of people are complaining about how high food prices are right now, but just wait.  If some sort of a miracle doesn’t happen, agricultural production is going to be way below expectations in both the United States and Europe, and that is going to have very serious implications for 2023… [ ]

In France, where an intense drought has hammered farmers and prompted widespread limits on freshwater use, there was just 9.7 millimetres (0.38 inches) of rain last month, Meteo France said.

That was 84 percent down on the average levels seen for July between 1991 and 2022, making it the driest month since March 1961, the agency added.

Crop failures in France would be a really, really big deal, because France is normally “the fourth-largest exporter of wheat” in the entire world…

France is the fourth-largest exporter of wheat and among the top five exporters of maize globally. Poor harvests due to drought may heap further pressure on grain supplies after Russia’s invasion of Ukraine caused global shockwaves.

The situation in Germany is also extremely dire.

Germany’s most-important river is running dry as Europe suffers through a drought that is on course to become its worst in 500 years, with terrifying wildfires burning once again in France.

Water levels in the Rhine – which carries 80 per cent of all goods transported by water in Germany, from its industrial heartlands to Dutch ports – are now so low that it could become impassable to barges later this week, threatening vital supplies of oil and coal that the country is relying upon as Russia turns off the gas tap.

FORT COLLINS, Colo. (Reuters) – Severe drought has slashed expected U.S. spring wheat output to a three-decade low and across the border on the Canadian Prairies, crops are in similarly tough shape. With little relief in sight, production forecasts should fall, and other global export markets will likely have to pick up Canada’s slack.

A significant amount of Canada’s annual wheat and canola output go to exports, and those products are important on the world stage. Top customer China is among those that may need to seek supplies elsewhere, and trade rival Australia could be a good candidate to help fill that gap.

Canada’s Prairies have been in a drought ever since the growing season began, and with low rainfall totals and warm temperatures, that situation has worsened within the last month. Forecasts as of Wednesday continue to suggest the warm and dry trend is likely to continue through at least the end of the month.