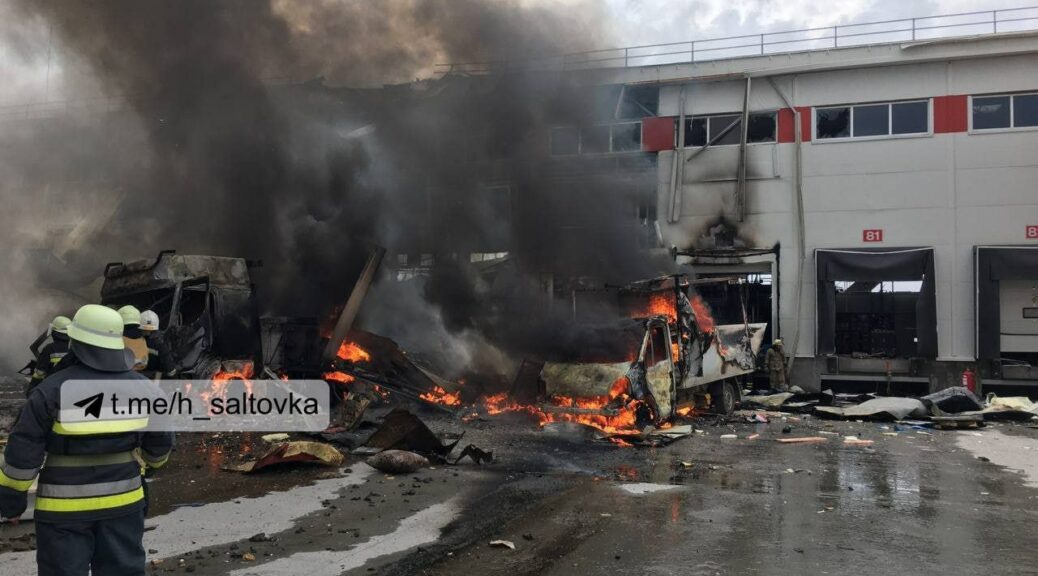 The Ukrainians lost the central arsenal with thousands of tons of ammunition – They attempted an invasion with ten tanks on Russian soil!

Donbass is left without supplies

The Ukrainians lost their largest arsenal in the Kharkiv region with thousands of tons of ammunition over an area of ​​several hundred hectares. This is the main arsenal that supplied the forces in Donbas.

The Russians found a lot of western ammunition inside, such as shells.

The Russians emphasize that ” due to the huge size of their arsenal it would be impossible to destroy it all. It is now in our hands and thus the problem of supplying our own forces is facilitated ”!

WarNews247 reported a few hours ago on the loss of a large Ukrainian military depot but no one knew until now how serious this issue is.

It is the main weapons depot of the Ukrainian Army that supplied the whole of Donbas. This, in turn, explains why the Russians claimed that the Ukrainians were running out of ammunition.

The Ukrainians have not only lost this weapons depot today. In Kharkov, the Russian Armed Forces destroyed several civilian trucks and buses near the Novaya Pochta building.

According to the Russians, the Ukrainians used them to replenish their forces.

As it turns out, on April 16, near Nikolaev in Donbass, Russian forces discovered a parking lot with military trucks, which were also located opposite the post office of the same company.

Then the Russians realized that the weapons were being transported. This was followed by bombing…

Watch videos from the weapons depots

The Russians claim that the Ukrainians tried to surprise and launch an offensive inside Russian territory.

In particular, they report that Ukrainian tanks tried to invade Russian territory from the Belgorod region.

The incident took place near Goptovka, a border crossing point on the Ukrainian-Russian border in the Dergachov region of the Kharkiv region.

For this operation, the Ukrainians mobilized ten tanks.

During the battle with the Russian troops, the Ukrainians lost eight tanks while two others fled in the opposite direction.

The Nekhoteevka checkpoint in the Belgorod area is closed until further notice.

According to the latest information, the Ukrainian tanks tried to reach the Russian border checkpoint Nekhoteevka, but the operation of the Ukrainian Armed Forces failed. 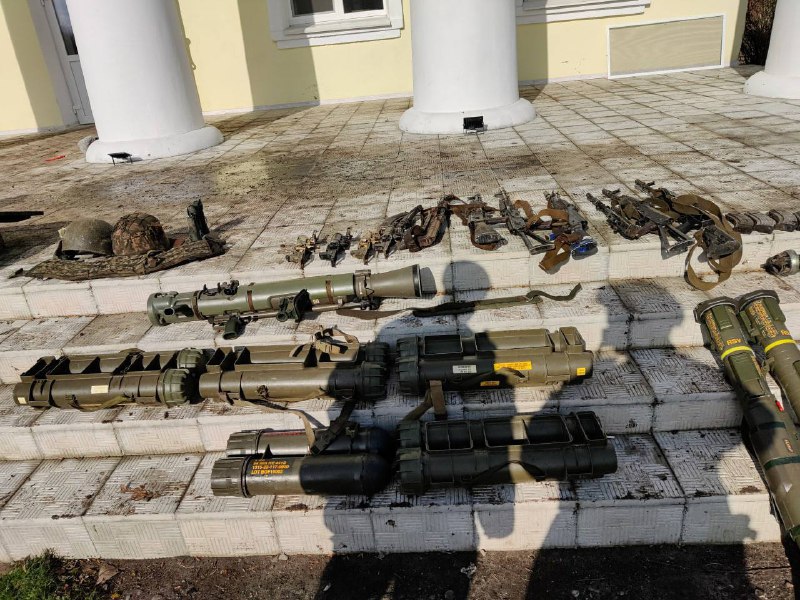 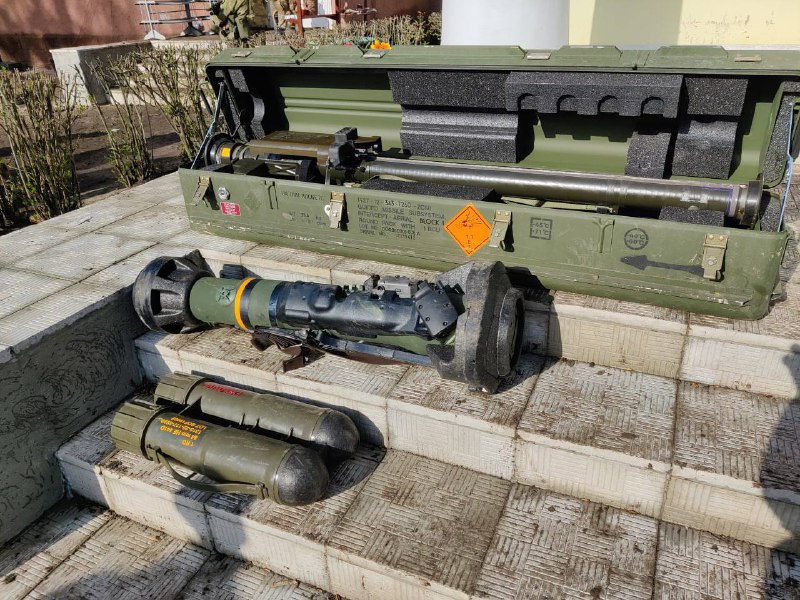 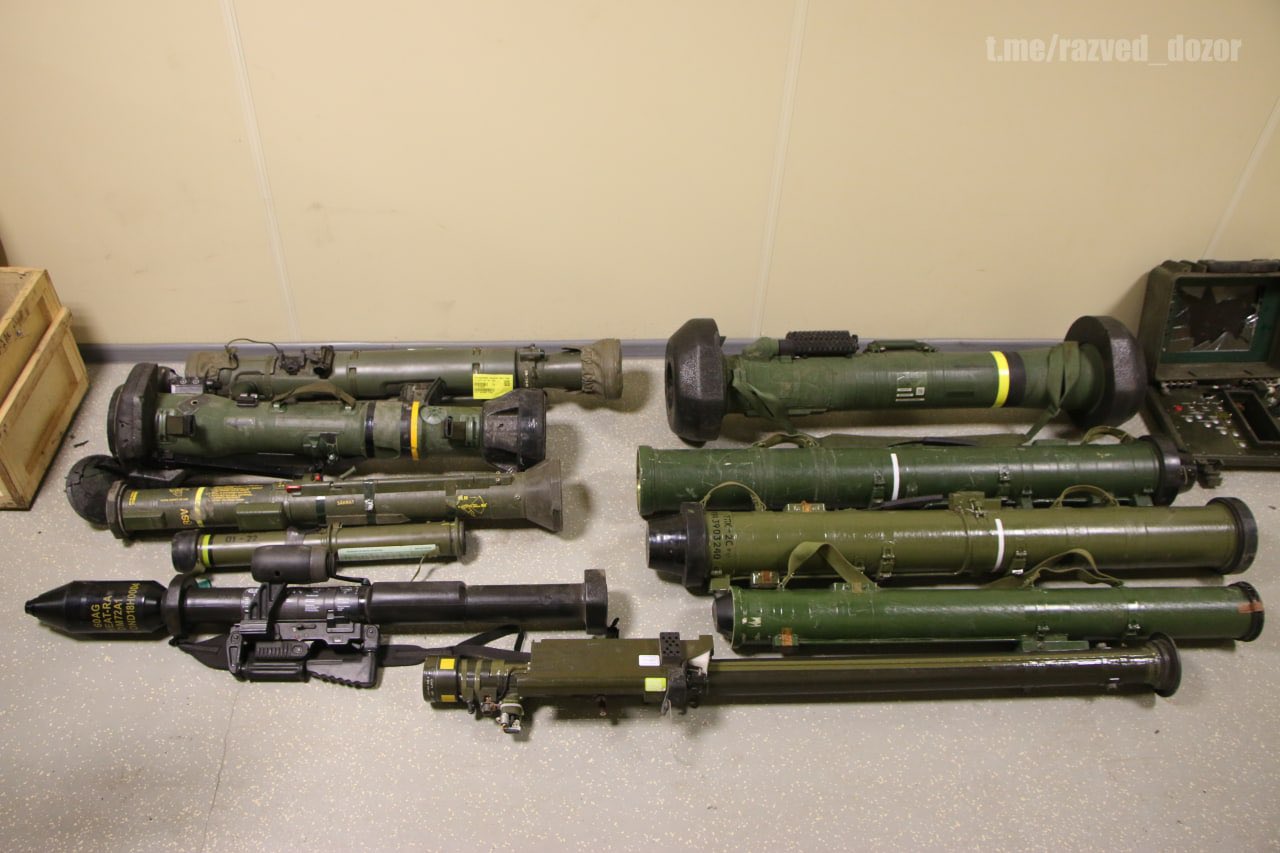 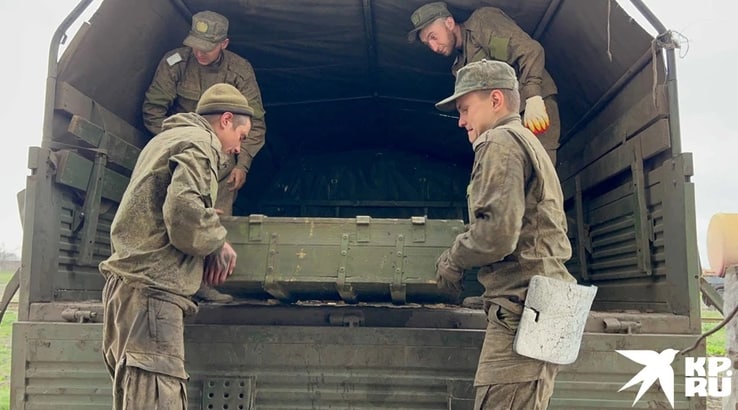 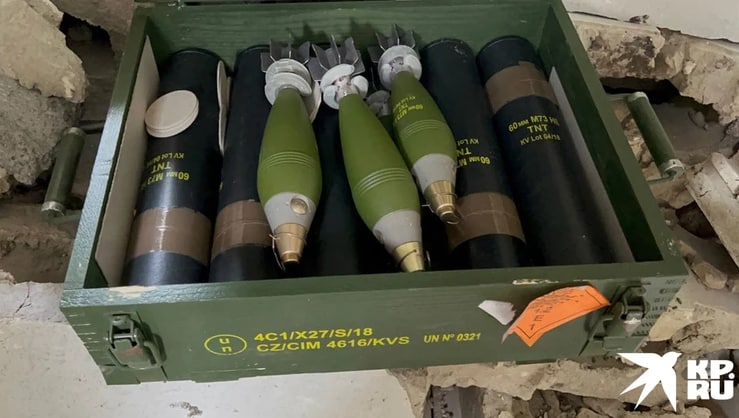 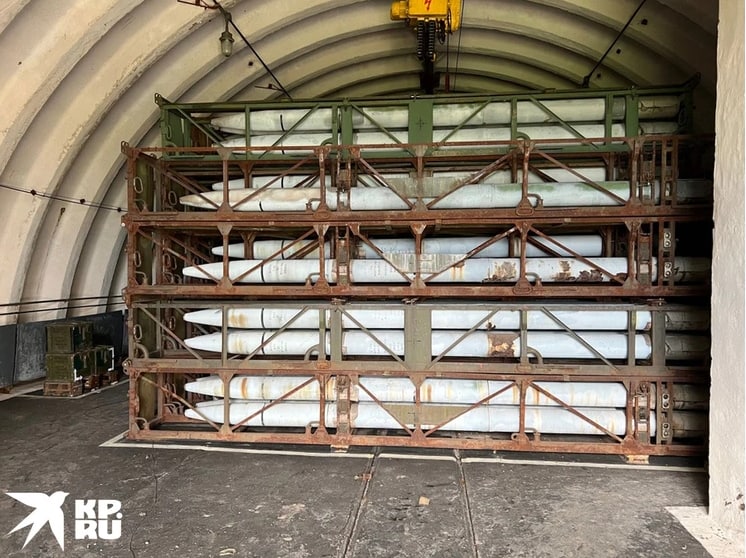 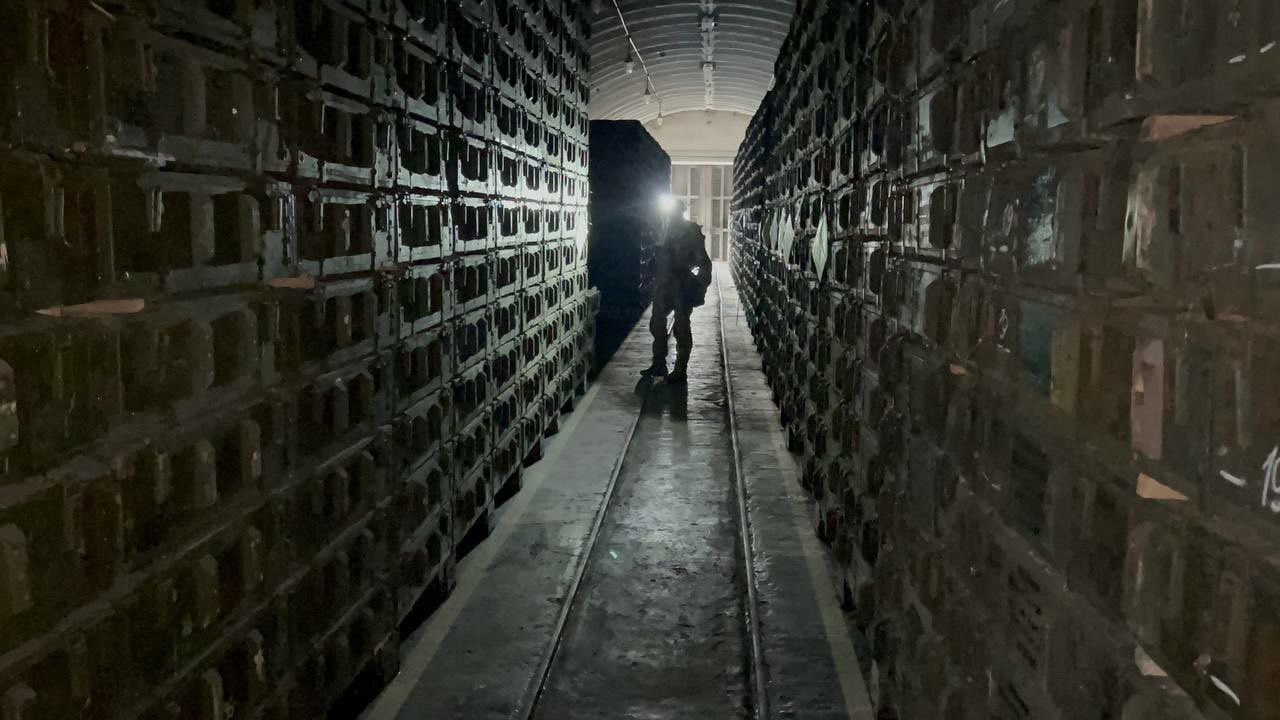 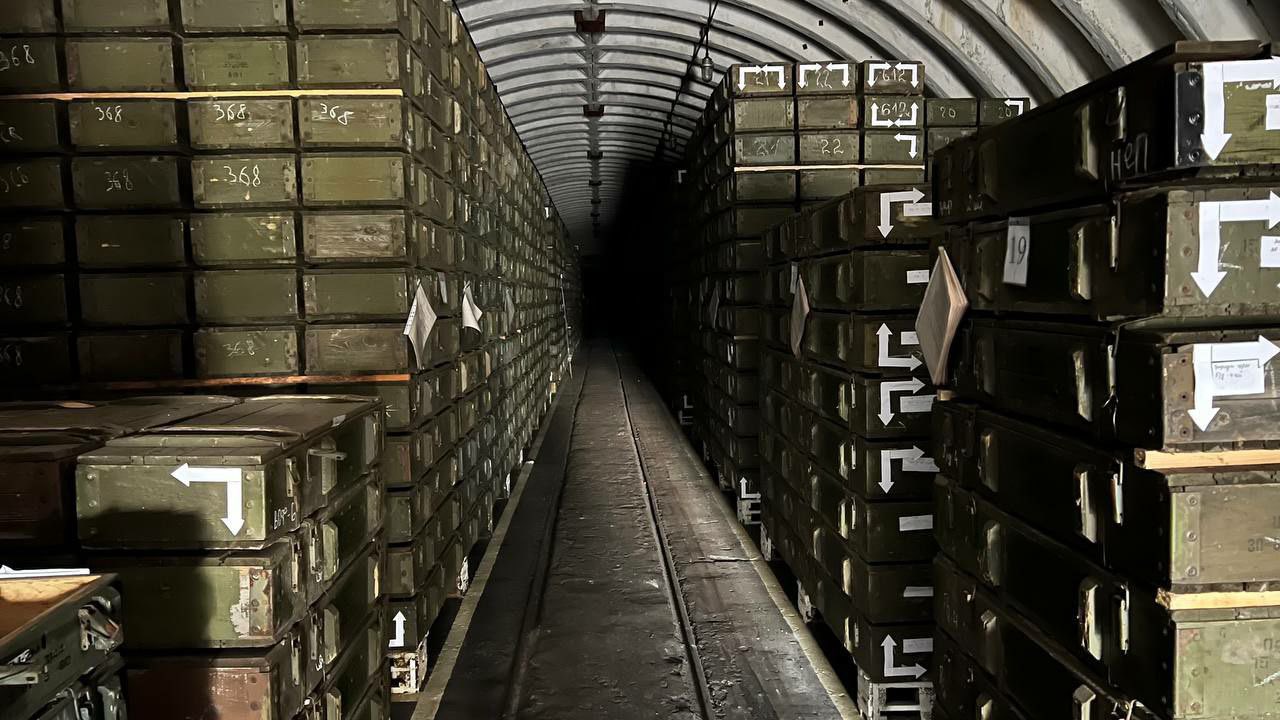 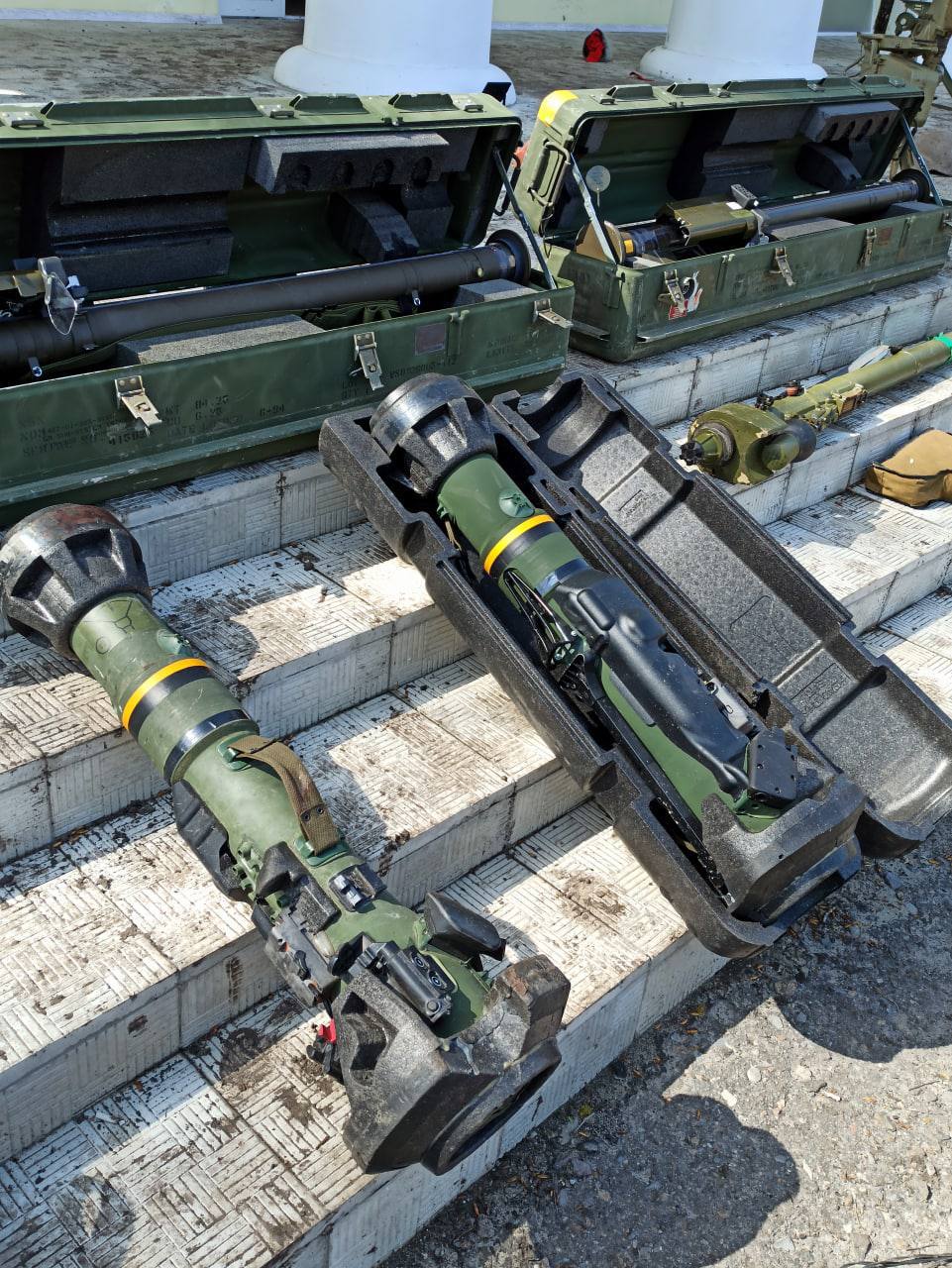 They also retreated from Sheverodonetsk-Lisichansk

Shock maps are coming from the Donbas area as they show that the Ukrainian Army is in a dramatic situation. Russian forces are now approaching Slavyansk with the city mayor ordering an immediate evacuation.

The maps reveal the situation as Ukrainian forces west and south of Izium and as far as Slavyansk begin to be trapped. The Russians are “cutting” the Ukrainian forces into small pockets thanks to the multifaceted attack they have launched.

The development has taken many inside and outside Ukraine by surprise as the Russians move forward despite the multi-level fortifications created by the Ukrainians for 8 years. If the Russian advance is not stopped, then Donbas will end in 3 weeks. And Ukraine is losing 90,000 troops.

The Russians attribute the Ukrainian collapse to three causes: Lack of reserves forcing them to move forces to fill gaps, lack of ammunition and fatigue. According to their estimates, the Ukrainians need at least a month to reorganize.

Ukraine: “We lost 42 territories in 24 hours” – The US risks a huge NATO arms shipment – Who enters the war with tanks?

“The Russians bombed Slavyansk, most likely with cluster bombs. We urge the citizens to leave, “said Vadim Lyakh, head of the city administration.

The Ukrainians acknowledged the rapid advance of the Russians who arrived in 48 hours at the gate of Slavyansk.

“The night passed restlessly, the city was bombed. They were probably cluster bombs. Fortunately, there were no casualties. The damage is now being revealed. “

There are reports that Russian forces have occupied the Lozove area and are fighting with Ukrainian forces for control of the city of Rubtsi. If this happens then the first pocket west of Izium closes and an attack begins in Slavyansk.

Apparently this is why the Ukrainian mayor asked for the evacuation of Slavyansk.

However, the General Staff of Ukraine confirmed the Russian attacks currently taking place in Zavody and Dibrovny with tanks and artillery.

Russia has reached the outskirts of both cities, but has not yet entered either.

Chief Zaporizhia: The Russians are advancing deep into the region

“The Russian army is trying to go deeper into the region and is not giving up its ambition to reach Zaporizhia,” said the head of the regional military administration.

And here the Ukrainians admit that there is an issue with the Russians moving slowly but steadily.

The only hotbed of Ukrainian resistance at the moment is located in Avdiivka. Su-25 support aircraft are bombing positions of Ukrainians who have so far repulsed Russian attacks.

Instead, Lugansk forces occupied the Novotoshkovskoye area along the Bakhmut highway as well as the strategically important “29-Block post”. Now due to the altitude of the location they can control the whole business theater.

In the Gulyaipol region, the Russian Armed Forces advanced 20-25 km in three days, the Russian Ministry of Defense said.

Gulyaipol is a Ukrainian stronghold and an important city in the Donbass Business Theater.

Russian troops, backed by allied forces in Donetsk and Luhansk, continue to attack Ukrainian Armed Forces positions, preparing for a full-scale encirclement of the Ukrainian army.

The Russian Ministry of Defense has officially confirmed full control of the Kremennaya settlement. It is noted that this important city was occupied in a short time by Russian forces.

The Ukrainians retreated from Severodonetsk and Lisichansk

Ukraine is cut in two – Finally the railway connection

As reported by WarNews247 yesterday, Russia began to “cut” Ukraine in two parts by hitting railway and other bridges.

In total, four railway bridges cross the Dnieper. All were attacked by units of the Russian Armed Forces. Three of these bridges are located in the Dnipropetrovsk region and one – in Zaporizhia.

In addition to the railways, another 21 bridges cross the Dnieper, 9 of which are mobile, 6 are connected to hydroelectric stations, 7 combined bridges (rail and road) and one for pedestrians. Russia controls only three of them.

Ukrainians are in danger of running out of ammunition 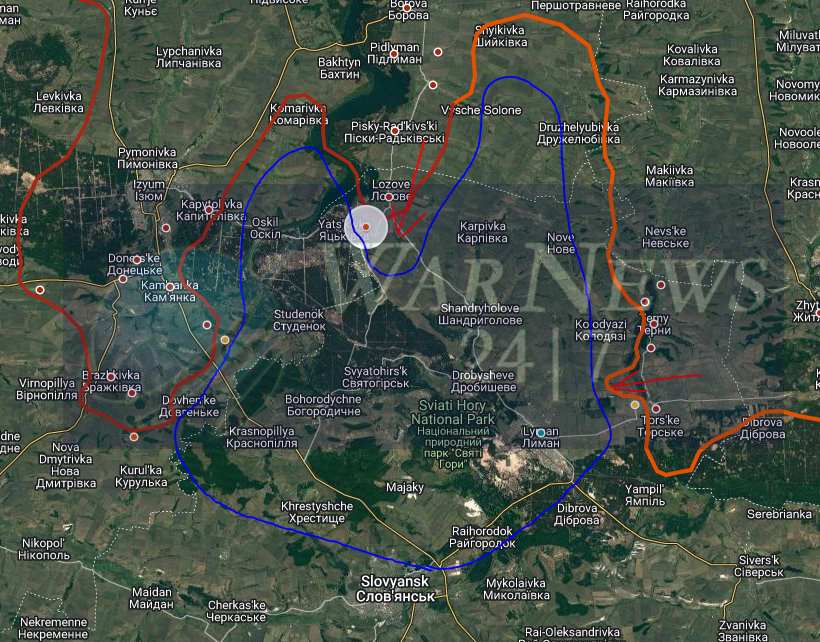 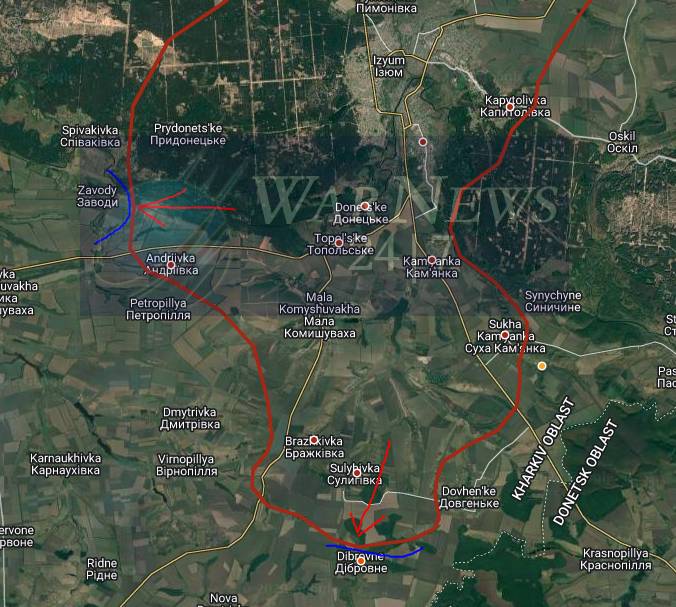 With 4 “X” the Russian bombing of railway bridges 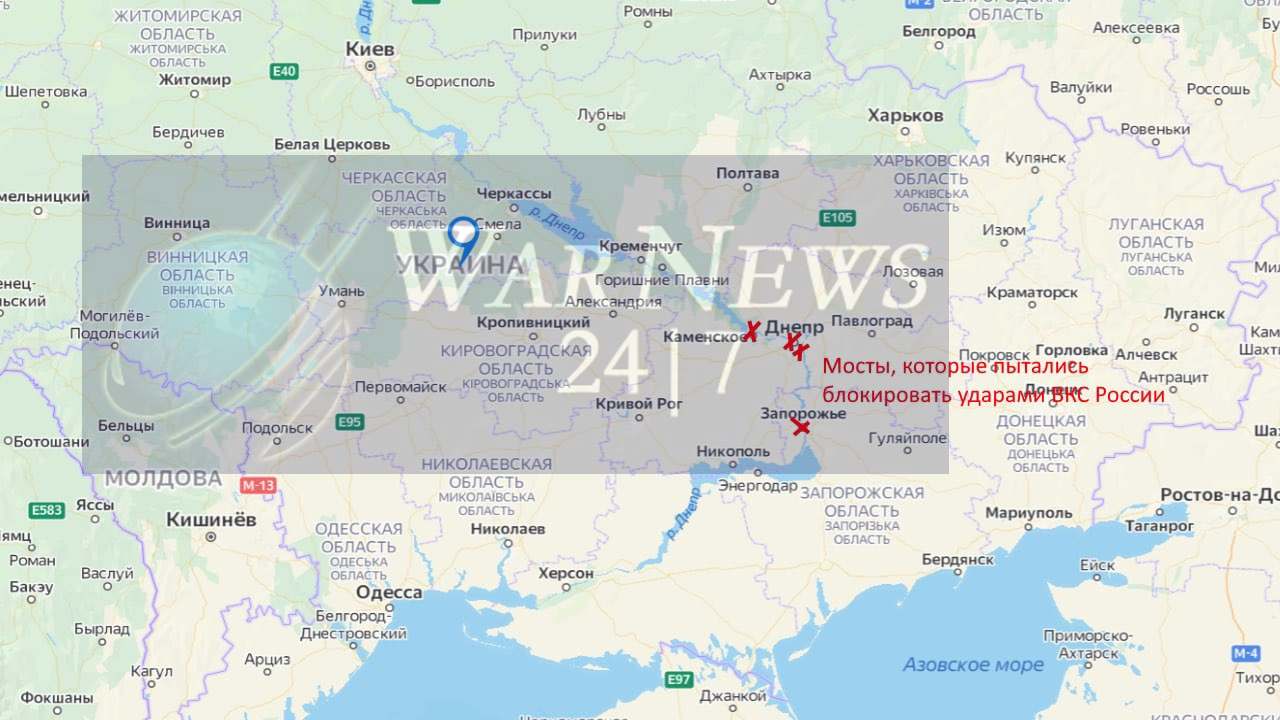 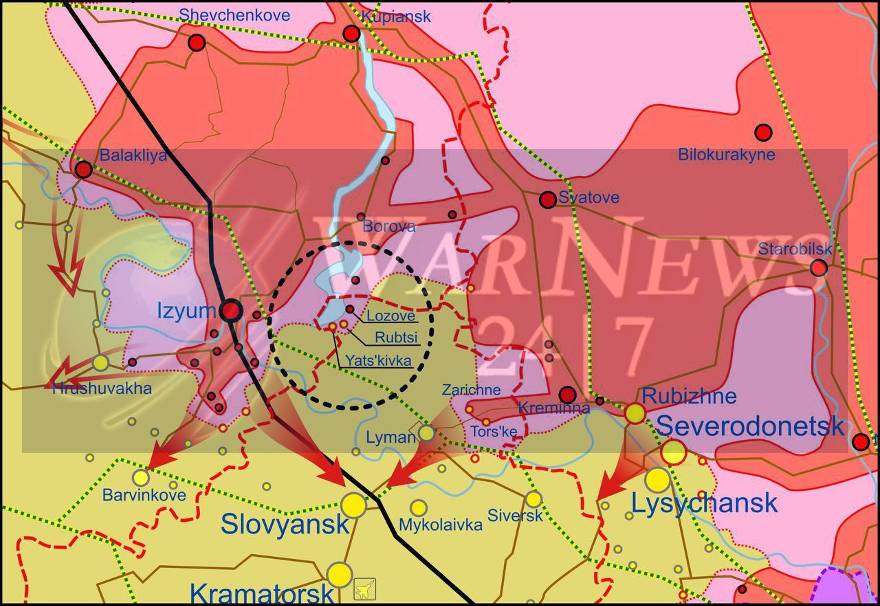 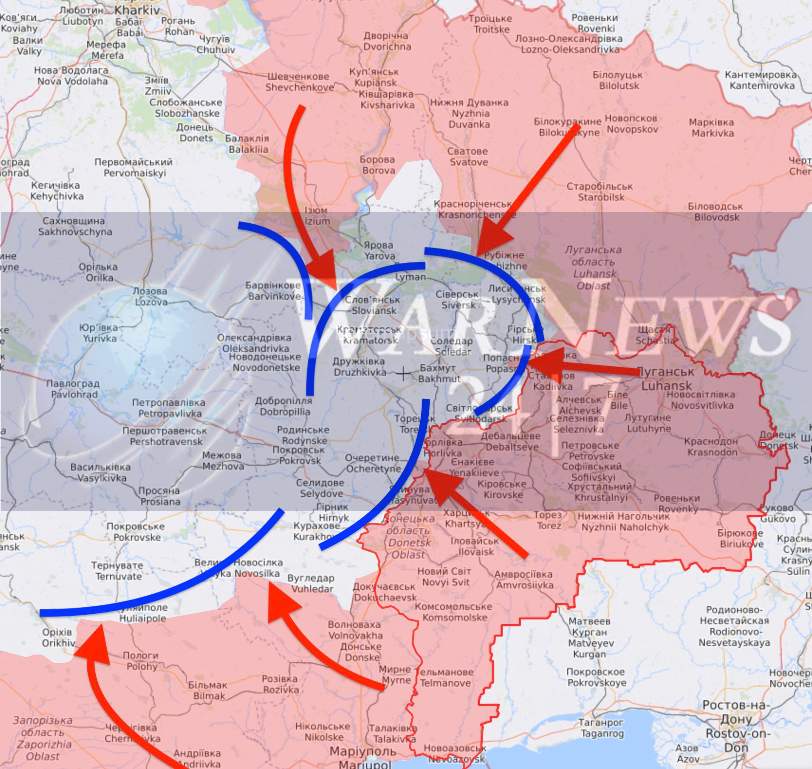 Ukraine: “We lost 42 territories in 24 hours” – The US risks a huge NATO arms shipment – Who enters the war with tanks?

Very close to a Russian attack on a NATO convoy

We are entering a very critical and dangerous situation as the United States announced the largest NATO arms shipment to date, saying that “Ukraine will have more tanks than Russia on the Eastern Front.”

This development raises many questions. Is a country entering with NATO tanks and insignia extinguished according to the Russian hybrid doctrine?

Or did the countries of Eastern Europe transfer all their naval resources to Ukraine? And how many T-72s did they have? Because Russia has transported several dozen tanks to the front.

In any case, the US and NATO are taking a big risk with the Russian strike on a NATO convoy approaching dramatically.

Earlier, it was publicly acknowledged that the Ukrainian Army had lost 42 areas in Donbas to an adviser to W. Zelensky, forcing the Americans to hasten a massive rearmament operation for the Ukrainian Armed Forces.

This development fully justifies WarNews247 as we noted today and last year, the Ukrainians lost several areas with 3-4 of them being important. The great battle may not be over yet, but the Russians are laying the groundwork for the encirclement of Ukrainian forces.

“Russian forces occupied 42 areas (villages and towns) in the eastern part of Donetsk on Thursday, but Ukraine may retake them,”  an aide to President Volodymyr Zelensky said on Ukrainian television.

“Today, 42 areas have been added to the list of those that have been occupied. “This is to the detriment of Donetsk,” said Olena Symonenko, an adviser.

“This happened today and maybe our forces will win them back tomorrow.”

No further details were given but WarNews247 has noted which areas these are.

The US Pentagon sends:

According to the Americans, 50 Ukrainians trained in US artillery systems in a “remote location” will return to the battlefield to train Ukrainian troops.

“Ukraine will have more tanks than Russia at the front”

“Ukraine will have more tanks available at the front than Russia, thanks to Soviet-era European T-72 tank deliveries.”

This was revealed by a senior US official without revealing from which countries the tanks come from and their type.

This is a very important development as it can, together with the drones, reverse the situation on the territory of Donbas, which is now stressful and desperate for the Ukrainians.

This is clearly a very large NATO involvement that brings the situation to a very critical point. We are very close to a Russian attack even on convoys within NATO territory.

Meanwhile, US Secretary of Defense Lloyd Austin will hold a war council with US allies at the US base in Ramstein, Germany, next week.

The meeting will take place next Tuesday and will focus exclusively on Ukraine.

Most NATO countries will join and discuss Ukraine’s future defense needs, in addition to the current conflict with Russia.

The Phoenix Ghost, the so-called “$ 800 million” US $ 800 million armament drones for Ukraine, were rapidly deployed by the US Air Force specifically for Kyiv and have similar capabilities to “Switchblade” drones. , as made known by the Pentagon.

“They were rapidly deployed by the Air Force to meet the specific needs of Ukraine,” said Pentagon spokesman John Kerby.

The White House said earlier today that at least 121 drones of this type (Phoenix Ghost Tactical Unmanned Aerial Systems) would be sent to Ukraine as part of the new armaments package.

This drone was designed specifically for the open ground battles of the Eastern Front.

Zakharova: “Russia has the right to strike US and NATO forces if they send weapons to Ukraine”

Moscow has every right to target US and NATO forces in the event that Western weapons enter Ukrainian territory.”

In particular, the Russian Foreign Ministry spokeswoman Maria Zakharova, after the announcement of the US sending new weapons to Ukraine, stressed that Moscow has the right to target US and NATO forces, in case the weapons of the West pass to the Ukrainian territory.

This could be interpreted as a direct threat of attack from Russia to the West.