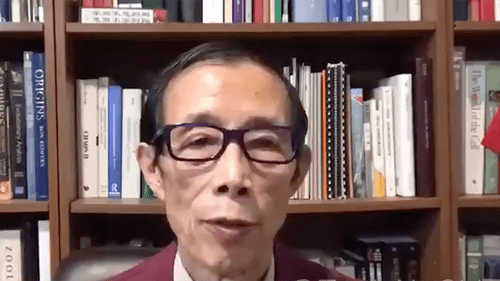 CCP’s Senior Advisor Chen Ping: The U.S. Is Beaten by the Biowarfare

A professor with close ties to the Communist Chinese Government has declared that his country ‘defeated’ the U.S. in 2020, winning a biological war, and putting America ‘back in it’s place’.

The comments were made by Chen Ping, a Senior Researcher at The China Institute of Fudan University, a CCP affiliated think tank, and a professor at Peking University.

Zeng writes that the researcher claims “the Western model has failed, the 500-year maritime civilization is doomed, the CCP has won and ‘will lead the way of the modernization in the new era after the biology revolution’ after the 2020 CCPVirus (COVID19) pandemic.”

Ping states in the video that “In 2020, China won the trade war, science and technology war, and especially the biological war.”

“The achievement is unprecedented. This is an epoch-making historical record,” he continues, adding “So for the liberal, America-worshiping cult within China, their worship of the U.S. is actually unfounded.”

“After this trade war and biological warfare, the U.S. was beaten back to its original shape,” Ping emphasised.

Ping also commented on the 2020 U.S. election, noting “I think Trump’s attempt to restore the declining international status of the U.S. during his 4 years has failed. This failure is not only the failure of Trump’s personal campaign for re-election as president, but also the failure of the neo-liberalism-led globalization of the past four decades led by the U.S. and the UK.”

“Therefore, the development and modernization model of the U.S. and Europe is not worthy of China’s imitation and repetition,” Ping added.

China’s economy has expanded by 18.3% in the first quarter of 2021 compared to the same period last year, marking the biggest increase since China started keeping quarterly records in 1992.

The country has undoubtedly been able to rebound quickly by getting ahead of the pandemic in late 2019, stalling and obscuring the facts of what was unfolding while a criminally compliant World Health Organisation parroted CCP talking points to the rest of the world.

With Trump out of office, America is now at the mercy of the Communist state, with Joe Biden having a long track record of selling out American industry to Chinese investors.

As we recently reported, a group of the world’s leading scientists have urged more investigation into the possibility that the coronavirus pandemic was caused by a leak from Wuhan’s Institute of Virology, saying that the World Health Organisation has dismissed the notion without proper consideration.

Meanwhile, GOP representatives on the House Intelligence Committee have demanded an update from the White House and the Director of National Intelligence on the possibility that the coronavirus leaked from the lab.

The Republicans, led by Ranking Member Devin Nunes also want access to any intelligence on the “gain of function” research that was undertaken at the Wuhan lab in conjunction with US agencies.

As we reported earlier in the year, top US National Security officials have indicated that they believe the most credible theory on the origin of COVID-19 is that it escaped from the Chinese laboratory