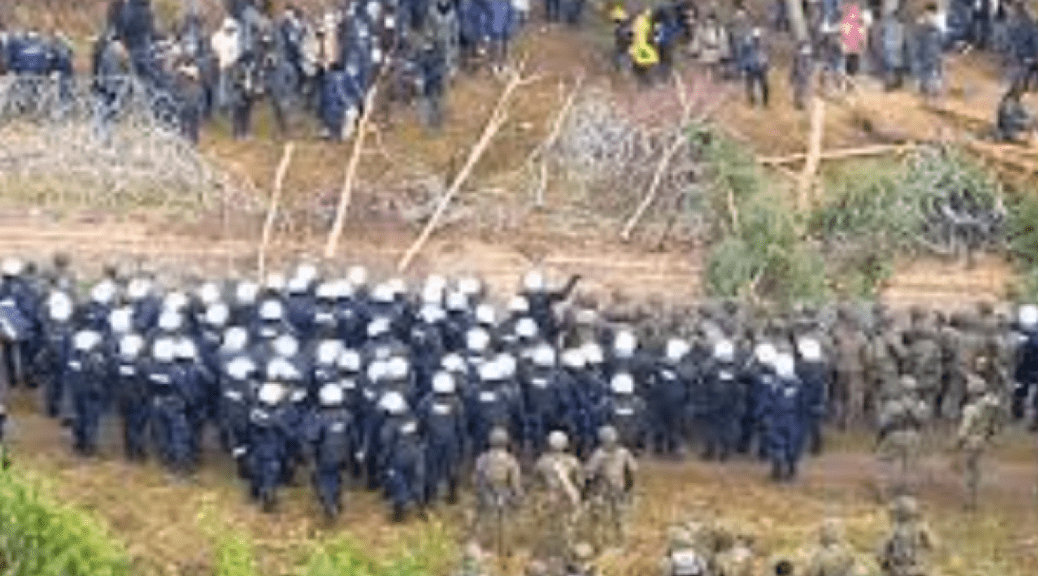 There is some important, unfolding international news here that nobody seems to be covering. Even the likes of the Saker are not talking about it.

Today on TruNews, a dangerous showdown is looming on the Poland-Belarus border. The worsening drama could draw NATO and Russia into the conflict.  Thousands of people from Iraq and other Middle Eastern countries are migrating their way to Germany and are passing through Belarus on their journey to the European Union.

Later in the program, Chinese financial firm Evergrande received a last-minute reprieve from collapse, as the US Fed warns of repercussions in America.

In our final segment, current US hide and seek champion Governor Gavin Newsom of California has been found, popping up at a rich socialite’s wedding over the weekend.

VLADIMIR PUTIN has sent nuclear bombers over Belarus in response to a growing number of migrants on the Polish Border, sparking war fears on the EU’s doorstep.

The aircraft was detected on Tuesday, its flight lasted from 02:15 pm to 07:28 pm local time

US concerned Russia ‘attempting to rehash’ 2014 invasion of Ukraine

…Urges to use cognitive, hypersonic technologies in new Russian weapons

Lithuania declares state of emergency on border with Belarus

This is a pretty crude understanding but at least he is talking about it.

Belarus has allowed 10,000-15,000 Middle Eastern “immigrants” into their country and is trying to send them into Poland.  Poland said “no” so Belarus allowed the migrants to head to Poland’s Border anyway!  Poland deployed 12,000 Troops.  Today, shots were fired.

A situation along the border between Poland and Belarus has taken a very dramatic turn.

Since the summer, Belarus has been allowing migrants into their country from the Middle East (Iraq & Syria) and elsewhere.  Those “migrants” want to go to the European Union.  So Belarus allowed the migrants to fly from Iraq and from Syria to Belarus, and then allowed them to begin traveling to the border between Belarus and Poland.

Yesterday, more plane loads of migrants from the Middle East were filling up as shown in the video below:

Poland wants none of these people and refused them entry.  Poland sent police and a few military assets to make sure the border was secure.

Several thousands such migrants have now been at the border for quite awhile and recently, they began pushing through border fences in an effort to force their way into Poland.  They were repelled by pepper spray.

In the meantime, Belarus reports they now have 10,000-15,000 such migrants and all of them are now also heading to the Poland border.

Poland has now deployed 12,000 army troops with orders to keep the migrants out.

Poland views the migrants as an attack against them by Belarus.  They view the migrants as a weapon of asymmetrical warfare, designed to destabilize Poland, and they won’t tolerate it. Polish authorities say as many as 4,000 migrants have now massed along Belarus’ border with Poland hoping to cross — the latest pawns in what the EU considers ‘ efforts by Belarus to weaponize immigration in its standoff with the bloc.

Earlier today There were reports of gunfire along the border as tension soared in the months-long crisis between Russia-aligned Belarus, and EU and NATO member Poland. Military forces have entrenched on both sides of the border, and migrants desperate to reach EU soil are caught in the middle, in dire conditions.

So now in eastern Europe, we have two tense situations developing; the one just reported above between Poland and Belarus, and the other long-simmering situation between Ukraine and Russia.

If a conflict were to break out between Poland and Belarus, that would cause NATO to have to engage with Poland, which might be the perfect time for Russia to engage against Ukraine and resolve that long-simmering trouble.  NATO would then be faced with potentially two fronts, even though Ukraine is not a NATO member.

War in eastern Europe is now looking very much possible.