American “Javelin” Anti-Tank Missiles Sent to Ukraine, Are Now FOR SALE on the Dark Web

People from Ukraine have posted several American made FGM-148 “Javelins” (photo above) for sale on the Dark Web Marketplace, and on Thief Marketplace.

One posting was made less than three hours ago and the seller advertised “shipping available from Ukraine, specifically Kyiv.”

The seller is charging $30,000 USD for what seems to be just the tube. Unseen is the command Launch Unit, and it is unclear if there is a missile in the tube.

The Sale photos posted with the offering are shown below: 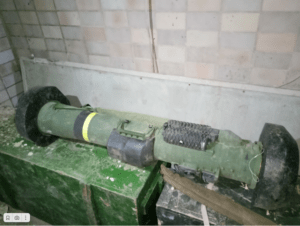 A full ensemble of the “Javelin” usually goes for $206,000 USD, with the Command Launch Unit valued at around  $120,000 USD and each missile at about 80K USD, so this posting is “a steal.”  I am not publishing the web address of this sale because I do NOT want these weapons out in public.

Listeners to the Hal Turner Radio Show were told WEEKS AGO, that weapons shipped from the USA to Ukraine as “aid” for Ukraine’s war with Russia, were ending up on the Black Market inside Serbia.  The weapons are being STOLEN by Ukrainians when they arrive in the country, and those Ukrainians are offering the weapons for sale on the Dark Web, then pocketing the money.

Listeners to the show were also told that a full TWO-THIRDS of the weapons being sent to Ukraine, were being stolen and sold on the black market.

Hey America, where do you think your $40 BILLION in “aid” is actually going???   Yes, an awful lot of it is being outright stolen.

In case any of you feel like calling your members of Congress to let them know what you think of what’s going on!

The NATO Military alliance just got the rug pulled out from beneath its entire operation.  It seems that Europe no longer has any Titanium, which is essential for the armor of tanks.  In years past, Europe bought its Titanium from . . .  Russia.   They can’t buy it anymore. As such, tank production – in Germany – has stopped.

Yes, you read that correctly, Tank building in Germany, has stopped.

Hints that there was some type of undisclosed problem with European militaries started being visible when Ukraine asked for tanks, Armored Personnel Carriers and more from Europe and the United States, to fight Russia.

Germany’s refusal to supply its heavy tanks to Poland was not at all caused by Berlin’s attempt to deceive Warsaw, but by the fact that Germany simply does not have titanium to build new tanks.

Some of my former colleagues in the Intelligence Community from my years working with the FBI Joint Terrorism Task Force (JTTF) tell me “due to the lack of titanium supplies from Russia, it is extremely problematic to establish the production of tanks in any required quantity today.”

Tanks require a fairly large amount of titanium, which is a component of the armor. However, due to the lack of supplies from Russia, this caused an almost complete halt in German tank building.

Moreover, a similar situation will soon occur in the UK, France, and other European countries.

Bottom line: If Russia were to engage NATO in actual war, then NATO would be completely unable to build _any_ replacement tanks, once existing tanks were destroyed in battle.

The short and sweet of it: NATO cannot afford to fight Russia because NATO countries don’t have Titanium to use for armor in tanks and without tanks, NATO would flatly lose the war.

This is kinda funny. Almost all of NATO is out there screeching like an old wash woman that “Russia baaaad.”

Then they all realized “Uh oh they supplied the materials we need to go kill them.”

Bahaha.  The governments of the west: Fucking morons.