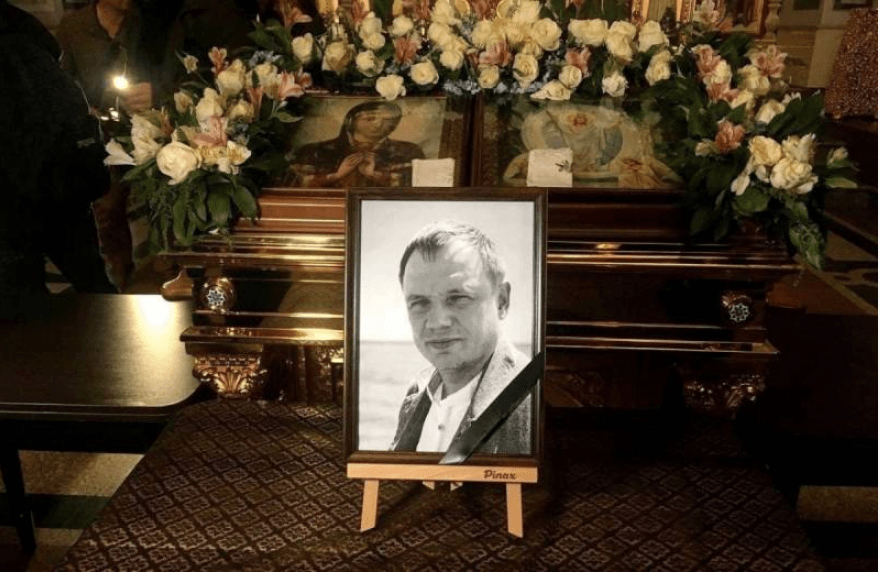 This is on one of Russia’s top military sites and the questions are being asked by Evgeny Federov who is a Russian nationalist.

Kirill Stremousov was killed in a car crash on the day the withdrawal from Kherson was announced.

The last day of Kirill Stremousov

In his last interview, Kirill Stremousov quite clearly and very emotionally expressed himself about the surrender of Kherson:

“I am primarily interested in the civilian population. Interested in the residents of Kherson, whom I personally promised that Russia will forever be in Kherson. Believe me, I have a moral right to declare this… Moral and ethical right… To the point that I am ready to resign my powers and not be – you know how? – in this general system, a person who is not responsible for his words. But on the other hand, if we talk about this situation, which can happen when our troops, for example, can leave Kherson, there is still a very large number of our fellow citizens in the city. Who received Russian passports, who believed us. And you know, at some stage it will be a blow not just to the back, but one more blow to people who will simply be abandoned. We declare that the Russians do not abandon their own.”

What is clear from this interview? First of all, that Kirill Stremousov was ready to the last to resist the withdrawal of the Russian army from Kherson. The words about the resignation of the deputy head of the regional administration are significant. If this happened, then Stremousov would have every reason to speak more openly about the situation. Simply put, he would not have been pressed by the burden of responsibility of an official position in the Kherson administration. A couple of rhetorical questions in this regard. How deeply was Stremousov involved in the details of the operation to withdraw their Kherson? How would he comment on the concessions that suddenly fell on Russia: the London Stock Exchange refused to ban the circulation of Russian steel, India was actually allowed to buy our oil at a price above the established ceiling, and Europe unblocked the transit of 20,000 barrels of steel. tons of Russian fertilizers to Africa? Let us leave these questions to the investigation, if, of course, it is announced. 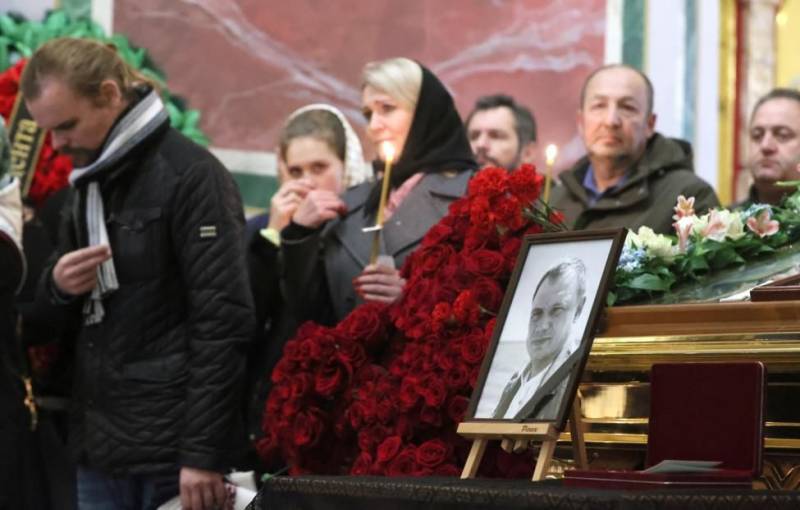 Now about the situation around the accident. Here, probably, the largest number of white spots. It’s worth starting with the fact that the details of any resonant tragedy, one way or another, become public. The information society has taught us this. Let’s go back a couple of months back to September 20, when the Russian patriot and talented artist Sergei Puskepalis tragically died. At his own expense, he bought an armored cash-in-transit Ford Transit for the militias, equipped it with humanitarian aid, and set off along the M8 highway from Yaroslavl to the Donbass. The moment of Sergei’s death was caught on camera and was on the air the very next day.

In the situation with the death of Stremousov, there is still not a single video evidence of his movement along the Kherson highway. It is clear that all the cameras on the highway have been removed for a long time, so that the enemy could not intercept the materials with the movement of Russian equipment. Most likely, video recorders were also confiscated from the local population – after all, no one canceled martial law. But no one took the smartphones from local residents, but as a result, we do not see a single photo and video from the accident site. Official materials, together with the final version, appear 6-7 hours after the first news of the death of Stremousov. And this is where the fun begins.

Kirill Stremousov is the second most important official in the Kherson regional administration. In conditions when the region is under martial law, and the enemy is several tens of kilometers away, administration officials of this rank should not just roll along public roads. Simply because on these roads it is easiest to organize an assassination attempt on them. Therefore, we proceed from the version that Kirill Stremousov did not just move in an armored car, but as part of a motorcade. Why is a tuple needed? To accommodate an armed guard of a VIP person. In addition, the terrorists do not have a clear understanding in which particular car the protected person is moving. According to the regulations, such an important official must be guarded by FSO officers who are equipped with special means of communication. However, until the evening it was not clear where specifically Stremousov got into a fatal accident – near Genichesk, where the Kherson administration moved, or near Nova Kakhovka. It turned out that the accident happened at the intersection of highways M-14, connecting Kherson with Melitopol, and R-47, connecting Novaya Kakhovka and Genichesk.

To justify the official version, in fairness, it is worth saying that such uncertainty could be associated with elementary security. Stremousov died on the left bank of the Dnieper, a few dozen kilometers from the line of contact. This means that the specialists of the Armed Forces of Ukraine could easily determine the place and strike from the very first photographs from the scene of the accident. For example, HIMARS missiles. The death of an official of such a rank would inevitably attract a lot of attention, including employees of the Ministry of Emergency Situations and special services, who are always on the list of targets of Ukrainian terrorists. Vladimir Saldo, the first of the officials who confirmed the death of the patriot, also expressed himself very ambiguously:

“Today, Kirill Stremousov died on the territory of the Kherson region.”

But even if the version with forced conspiracy is true, then why don’t the authorities openly explain themselves after the fact to the indifferent part of the public? 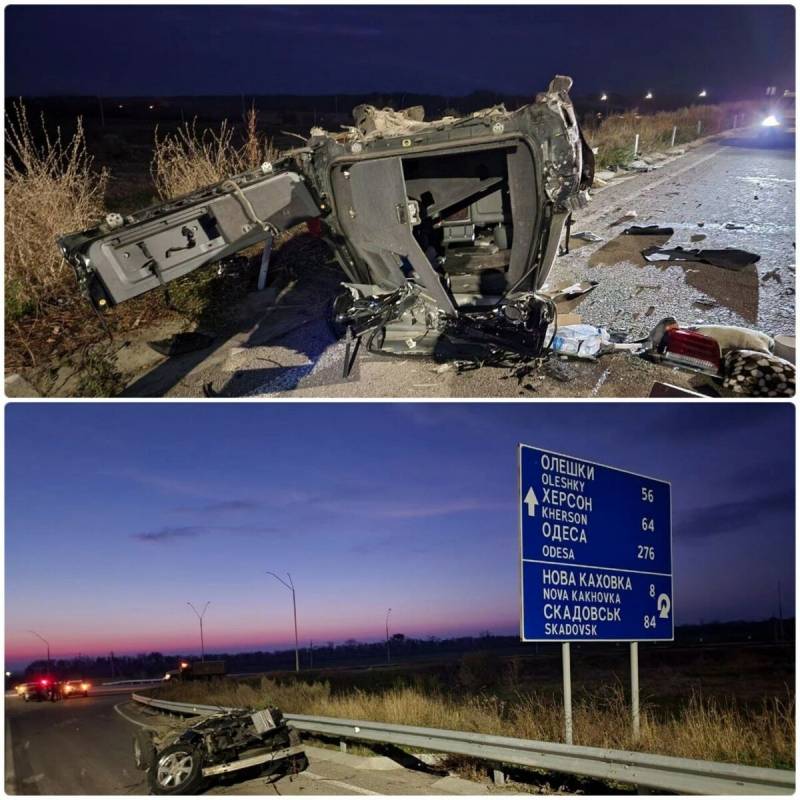 Location of the accident. Source: youtube.com

On the officially presented frames, a very unusual picture appears. In the middle of the road, near the four-wheel strikers, there is a frame from an SUV, presumably a Lexus LX, and a few meters away is an inverted armored capsule, in which, obviously, Stremousov died. Neither the cars of the cortege (if there was one at all) are visible, nor the culprit of the accident, who was declared to be an unnamed truck.

According to one version, the truck made a dangerous maneuver, as a result of which the official’s car was fatally damaged. According to another version, the truck not only made a maneuver, but crashed into a Lexus, and with such force that it tore off the armored vehicles from the frame. If so, where is the truck? Why was it not filmed by reporters who were the first to get to the scene of the tragedy? According to the version voiced by the aif.ru portal:

“The SUV followed the truck and got into an accident at the moment of leaving the junction. The truck made a sudden change of lane, which forced the driver of the SUV to maneuver and avoid the collision, causing the SUV to overturn at high speed.”

Armour did not save

The evening footage from the scene shows that the armored Lexus has obvious damage to the front, both on the free-standing frame and on the inverted armored capsule. Therefore, if the coup took place, then as a result of a head-on collision. Which, by the way, is not surprising – a car with several tons of armor has a high center of gravity. Either the Lexus rolled over from an unsuccessful maneuver, and after that it crashed into something massive, which is why the armored capsule was torn off. Frontal impacts in frame armored vehicles are always very dangerous – fastenings to the frame often do not withstand overloads, and the overweight body simply flies off.

Even unarmored versions of frame SUVs do not always cope with blows at harmless speeds – just look at how the body of the UAZ Patriot flies off the mounts when it collides with an obstacle at 60 km / h. Of course, Lexus is not a UAZ, but even in an accident it is not capable of holding a body that has become several times heavier on the frame. By the way, depending on the level of booking, the weight of the Lexus armor can reach more than five tons.

Judging by the footage from the place of death of Stremousov, the frame of the armored car has already been moved from the scene of the accident. After such a terrible accident, the frame cannot stand parallel to the movement at an intact bump stop. The second participant in the accident was either already evacuated or, for some reason, was not shown on camera. In any case, even for a truck, a hit by a five-ton armored car at good speed did not end in anything good – it would not have gotten anywhere on its own. This is the version according to which the culprit of the accident fled the scene of the accident. However, Stremousov’s car could have collided not with a truck, but with an army armored vehicle, of which there are plenty on the roads of the Kherson region. After such a blow, a hypothetical MTLB, BMP, or even more so, a tank could well retreat under its own power. 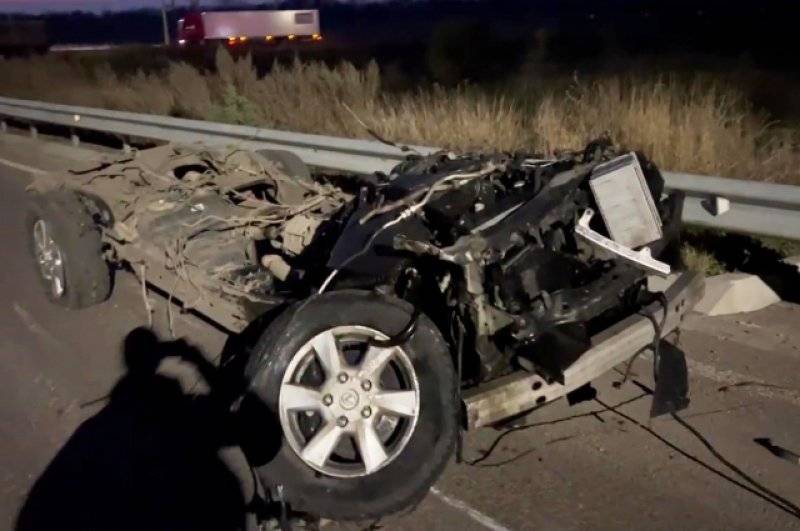 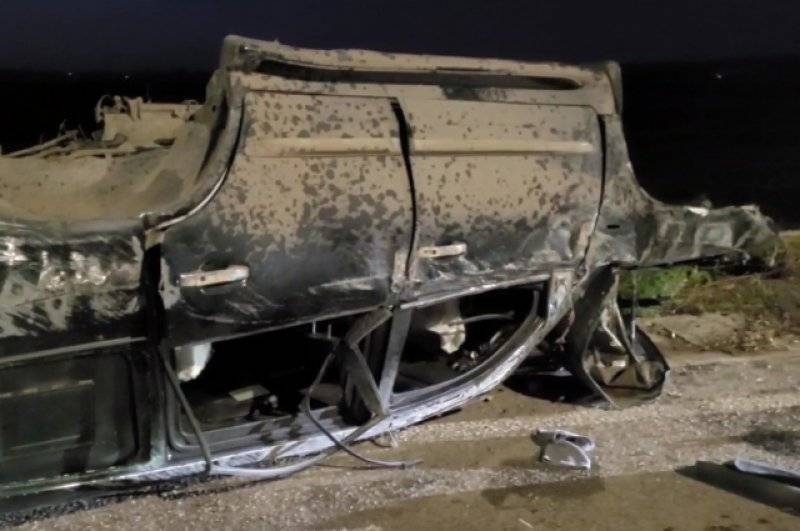 These frames show that the front part of the body and frames are deformed from a frontal impact. Source: youtube.com

Could Stremousov have survived the crash if he had buckled up? It is difficult to predict here, but one thing is clear – the power structure of the armored body remained intact, and the pillows worked. By the way, in an armored car, you should definitely buckle up. The armored capsule protects not only from bullets and shrapnel, but also from a land mine explosion. Unfastened passengers often receive serious injuries from impacts on the inside of the cabin, even airbags do not save, and sometimes exacerbate the consequences. In most of the videos, Kirill Stremousov travels by car unfastened. Whether it was worth it for him to take such risks in the hope of quickly leaving the wrecked armored car, the question is again rhetorical.

Inconsistencies and inconsistencies in the official version of the death of the second person in the administration of the Kherson region will inevitably give rise to alternative versions of what happened. And also to give propaganda slogans into the hands of enemies. An honest and impartial investigation will easily put an end to this.

Kirill Stremousov was buried on November 11 in Simferopol. The patriot of Russia has five children, and the sixth child will be born soon. He was only 45 years old. We express our sincere condolences to the family and friends of Cyril.