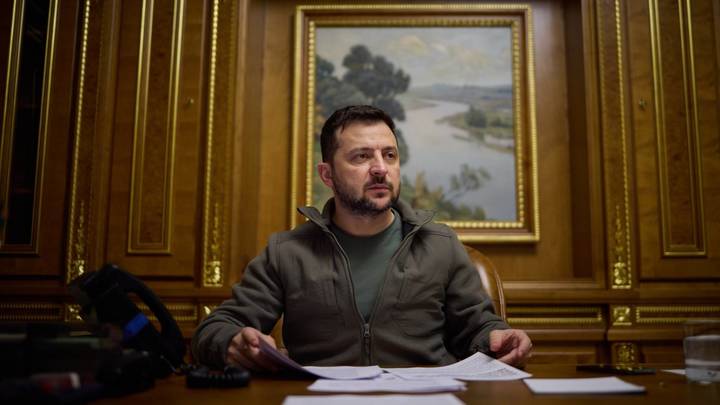 MOSCOW, September 23 – RIA Novosti. According to credible sources in various countries, including in Ukraine, according to incoming information, the Kyiv regime is preparing a provocation on its territory related to the detonation of the so-called dirty bomb, or low-yield nuclear weapon.
The purpose of the provocation is to accuse Russia of using weapons of mass destruction in the Ukrainian theater of operations, and thereby launch a powerful anti-Russian campaign in the world aimed at undermining confidence in Moscow .

Foreign Ministry: Ukraine is trying to get out after Zelensky’s words about strikes on Russia

From various sources it became known that under the leadership of Western curators, Kyiv has already begun the practical implementation of this plan. The leadership of the Eastern Mining and Processing Plant, located in the city of Zhovti Vody , Dnepropetrovsk region , as well as the Kiev Institute for Nuclear Research, was tasked with making the very “dirty bomb”. Work on it is already at the final stage.
At the same time, on behalf of Volodymyr Zelensky , employees of the office of the President of Ukraine from his close circle carry out covert contacts with representatives of the UK on the issue of a possible transfer of nuclear weapons components to the Kiev authorities.
The calculation of the organizers of the provocation is that if it is successfully implemented, most countries will react extremely harshly to the “nuclear incident” in Ukraine. As a result, Moscow will lose the support of many of its key partners, and the West will again try to raise the issue of depriving Russia of the status of a permanent member of the UN Security Council and increase anti-Russian rhetoric.

KYIV PLANS REVEALED: UKRAINE IS WAITING FOR A NUCLEAR STRIKE FROM ZELENSKY

A number of reliable sources report on the impending provocation by the Kyiv regime. Under the leadership of Western curators, a nuclear strike is being prepared on the territory of Ukraine, followed by blaming Russia for it.

The “dirty bomb” provocation aims to accuse Russia of using nuclear weapons during a special operation to protect Donbass. At the same time, according to RIA Novosti, the authors of the Zelensky bomb project want to achieve several goals at once. First, they are sure that after the explosion and the accusation of Russia of a nuclear strike, the allies will turn their backs on Moscow. Secondly, the West will have the opportunity to strengthen the anti-Russian rhetoric and may raise the issue of excluding Russia from the permanent members of the UN Security Council.

According to the source, the production of a nuclear bomb was entrusted to the leadership of the Eastern Mining and Processing Plant in the city of Zhovti Vody, Dnepropetrovsk region. In addition, support is provided by the Kyiv Institute for Nuclear Research. The operation is managed by Western curators. Work on the creation of a bomb that should explode on the territory of Ukraine is at the final stage. Where exactly the projectile will be used is not specified at the moment.

It is worth noting that the President of Ukraine Volodymyr Zelensky has already spoken out in the public space demanding to transfer nuclear weapons to Ukraine. At the same time, it is worth noting that after the collapse of the USSR, Ukraine lost the opportunity to have nuclear weapons. However, sources of “RIA Novosti” report that, in parallel with the work on the creation of a “dirty bomb”, the leadership of the Kyiv regime continues behind-the-scenes negotiations with the UK on the transfer of nuclear weapons.

Update(1645ET): A major new and sensational charge of a Ukrainian false flag plot in the making issued by Russia’s defense chief has set off a string of tit-for-tat accusations and statements Sunday.

Russian Defense Minister Sergei Shoigu claimed in rare phone calls that included his counterparts from the United States, Britain, France, and Turkey that Ukrainian forces are preparing a “provocation” with a radioactive device. A Kremlin statement cited that he conveyed a warning over “possible Ukrainian provocations involving a ‘dirty bomb'”.

Shoigu’s office said in follow-up that he conveyed the warning to all the above-named countries’ defense chiefs. As for his conversation with Secretary of Defense Lloyd Austin, it was the second phone call in merely three days. The Pentagon in the hours after said Austin told Shoigu he “rejected any pretext for Russian escalation” – which strongly suggests the US perceives that Moscow is about to heighten attacks on Ukrainian cities further:

Russian authorities repeatedly have made allegations that Ukraine could detonate a dirty bomb in a false flag attack and blame it on Moscow. Ukrainian authorities, in turn, have accused the Kremlin of hatching such a plan.

The Kremlin is further charging that this low-intensity nuclear provocation is being prepared with the help of Great Britain; however, the Western allies have said no evidence whatsoever was presented in the phone calls alongside the accusations.

The UK defense ministry said in its statement following Shoigu’s phone call with Secretary Ben Wallace that the Russian side “alleged that Ukraine was planning actions facilitated by Western countries, including the UK, to escalate the conflict in Ukraine.”

“The Defense Secretary refuted these claims and cautioned that such allegations should not be used as a pretext for greater escalation,” the ministry said.

Russia is saying that such a ‘dirty bomb’ detonation, which would spread radioactive waste and potentially contaminate large urban areas, would then be blamed on Moscow in order to justify greater Western intervention.

Ukraine, for its part, blasted what the presidency’s office called an “absolute and quite predictable absurdity” and blatant “lie”. France too agreed with Ukraine’s assessment, and a statement from the French Foreign Ministry has ominously warned that the crisis is “trending towards uncontrollable escalation.” But Macron on Sunday admitted that “peace is possible” – yet it depends on when the Ukrainians “decide it”.

Who exactly endowed this person with the authority to decide when the US must launch World War III on his behalf https://t.co/GYc98QnH89

Meanwhile, Zelensky’s own rhetoric urging Western military intervention has escalated as well, all of which strongly suggests the war will soon grow hotter.

Now much of Western Ukraine, which lies far away from the front lines of fighting with Russia in the east, is without power due to fresh weekend airstrikes across the country.

“We continue eliminating the aftermath of today’s terrorist attacks on our infrastructure,” Zelensky said. “The geography of this new massive strike is very wide.”

The past days have already seen power outages in Kyiv, with energy grid authorities warning of rolling blackouts, and urging residents to take power-saving measures such as the avoidance of running large appliances.

On Saturday the national power utility operator Ukrenergo said that damage from the latest round of Russian strikes set a new record. The Saturday air offensive by Russia was bigger than an initial major wave of strikes from earlier this month:

Oleksandr Kharchenko, a Ukrainian energy official, said in an interview with US media that national infrastructure vital for the people is facing “really huge trouble”.

“When you don’t have electricity in a city, it means you have no water, you have no supply of gas, you have nothing,” Kharchenko said. Days prior to the stepped-up Saturday assault the government said one-third of all power stations had been hit or damaged in Russian strikes.

The right bank of Kyiv covered in darkness this evening as the Ukrainian authorities began to implement planned power outages to save energy, due to continued Russian strikes targeting Ukraine’s energy infrastructure. pic.twitter.com/QeR6AEvYwG

Most new damage to energy has been recorded in the country’s west, south and center, with some hospitals since reporting they are running on backup generators. Reserves of oxygen and fresh water are also being tapped by hospitals.

Ukrenegro has on Sunday introduced phased blackouts to “avoid accidents”, per The Guardian:

The blackouts began at 11.13am local time (09.30am BST), with households in Kyiv divided into three groups that will be “disconnected for a certain period of time”, DTEK said.

It added that the blackouts should last “no more than four hours” but may be longer “due to the scale of damage to the power supply system”.

According to the latest estimate of the damage reported in Reuters, “Russia has hit at least half of Ukraine’s thermal generation capacity and caused billions of dollars of damage in attacks since Oct. 10, but not all stricken power units have stopped working completely, Ukraine’s energy minister said on Friday.”

Further, “Herman Halushchenko told Reuters in an interview that 30-40% of overall national power infrastructure had been hit in attacks that he depicted as intended to destroy Ukraine’s energy system — a goal that he said had not been achieved.”