An ABC news fishing expedition on Facebook took a startling turn over the weekend, after a reporter asked readers to share stories of loved ones who died of Covid after refusing or delaying to get the vaccine.

Instead, thousands of readers reported of loved ones who died after vaccination and, even worse, from adverse reactions to the vaccine.

By noon on Monday, the post had received over 39,000 angry and often heartbreaking responses. Virtually every string contains a firsthand report by people whose family members are grieving the loss of loved ones of all ages.

Typical of many of the responses, one woman wrote poignantly:

Another had multiple stories to report, and communicated the overwhelming disillusionment with the corporate media overwhelming voiced by posters. 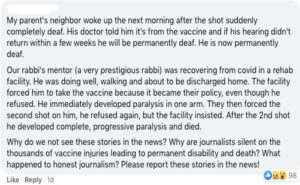 Representative of many who complained of contracting Covid after the vaccine, one woman reported her own experience of the vaccinated spreading the disease to the unvaccinated:

A registered nurse offered her perspective in response to Libertarian Vice Presidential Candidate Spike Cohen who had chimed in with a wry and highly “liked” comment: 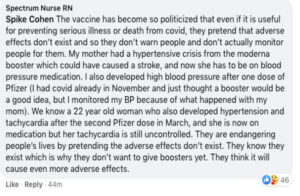 Surprisingly absent are reports of those who died after refusing the vaccine. Instead, the following post can be described as typical:

WorldTribune staff lacked the time to read all 39,000 responses (as of mid-day Sept. 13) before going to press, but there is clearly a treasure trove of valuable information here that merits sifting. Until then, one observer summed up the overwhelming sentiment of the responses and ABC’s failure to attract stories of the dead unvaccinated:

Meanwhile, Gateway Pundit reported on Monday that nearly 4,000 vaccination deaths have been reported to the VAERS system since July 24, an average of 70 per day.

Babies could be given Pfizer’s Covid vaccine in the US this winter: Company plans to seek approval for jabbing six-month-olds in November

We can officially confirm that the number of people to have died due to the Covid vaccines has surpassed the number of people who have died of Covid-19, and we believe the data was released by accident.According to official NHS data which can be viewed here, from March 2020 up to the 25th August 2021; a period of 18 months, 90,147 Covid deaths within 28 days of a positive test have been recorded in England hospitals.Of these 86.315 all died of other serious pre-existing conditions including dementia, chronic kidney disease, chronic pulmonary disease, chronic neurological disease, and heart disease, but were added to the Covid statistics due to having received a positive test within 28 days of their death.

Based on Public Health Scotland data seen in the following chart it would seem the top pre-existing condition of those who’ve died with a positive test result for Covid-19 has been dementia, followed by heart disease and chronic respiratory disease.