New figures from the Institute and Faculty of Actuaries (IFA) Mortality Monitor released today show that cumulative mortality in the first six months of 2021 in England and Wales is running 0.4% below the 10-year average, once adjusted for the size and age of the population (see above). This means, despite the surge in winter Covid deaths in January and February that spooked the country into accepting ongoing restrictions, 2021 is officially now a low mortality year. The low mortality since March has entirely cancelled out the initial spike.

The IFA used to report the cumulative age-adjusted mortality figures compared to the ten-year average each week, but controversially changed their baseline in their weekly reports in May from the ten-year average to 2019 (the lowest mortality year on record) just as 2021 was about to go below average. This means we have had to wait for the quarterly report today for the next update in order to be able to announce this milestone.

The new figures raise the obvious question: how can the Government justify continuing with any kind of restrictions or emergency measures for a moment longer when overall mortality is so low? Where now is the emergency that could justify extraordinary measures?

Some will say it is only the restrictions that have prevented things being much worse. But where is the evidence of that? The U.K. has had more Covid deaths per head of population than countries such as Sweden which had fewer restrictions, while U.S. states which had few or no restrictions over the winter fared no worse (and often better) than those which had the strictest measures. Numerous studies have shown no relationship between restrictions and COVID-19 death tolls.

The latest figures, placing 2021 squarely among the least deadly years in history, should leave no one in any doubt that the emergency is well and truly over. 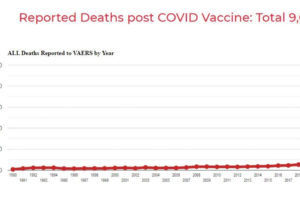 According to the Centers for Disease Control (CDC) more people died from the VACCINE, than died from COVID-19 last week in the USA.

Also last week there were 1,505 COVID-19 deaths in the United States.

Making the so-called “vaccine” even worse, there have been 411,931 adverse reactions reported about the vaccine.

With factual numbers like these, no rational person would willingly decide to take this so-called vaccine, and no one should.