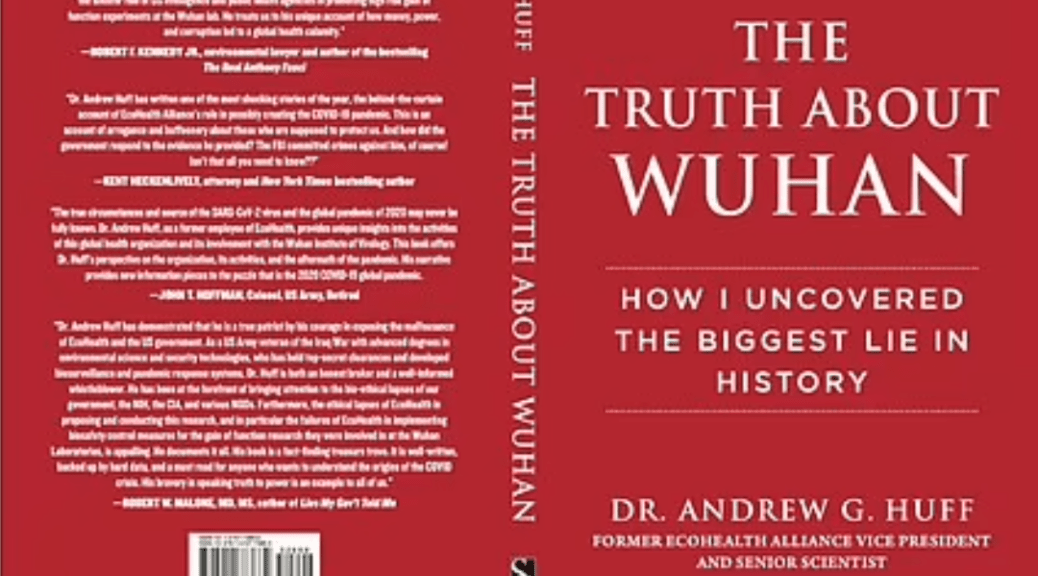 A scientist who worked closely with a US-funded Wuhan lab has claimed that Covid was genetically engineered and leaked from the Chinese facility.

Dr Andrew Huff, the former vice president of EcoHealth Alliance, called the pandemic ‘one of the greatest cover-ups in history’ and the ‘biggest US intelligence failure since 9/11.’

In his expert opinion, whistleblower Huff believes that grant funding provided by Anthony Fauci by way of the National Institutes of Health (NIH) to EcoHealth Alliance, was linked to the ‘creation of SARS-CoV-2.’

He claims NIH ‘[funded] gain-of-function work and the US intelligence community was aware of and appeared to have been involved’ with this work.

Gain-of-function (GOF) work has been widely believed to have created SARS-CoV-2, Huff stressing that it was key in creating the aggressive and contagious disease.

The pandemic swept across the globe and has so far claimed the lives of 6.64 million people after first being reported as a cluster of cases of pneumonia in Wuhan, China in late 2019.

The Wuhan Institute of Virology, a high security lab specializing in coronaviruses, has been cast into the spotlight over the past two years, many questioning whether it could be the source of the highly contagious disease.

Both China and the lab have vehemently denied allegations, but evidence of a lab leak, have been gaining traction as scientists, researchers and governments hunt for answers.

Experts have suggested Covid may have escaped from the Wuhan facility through an infected researcher, improper disposal of waste or potential breaches in security at the site.

In explosive allegations made in his new book, The Truth About Wuhan, Huff claims that the pandemic was the result of the US government funding of dangerous genetic engineering of coronaviruses in China.

Speaking to The Sun, Huff said that ‘the US government is to blame for the transfer of dangerous biotechnology to the Chinese.’

He points to China’s GOF experiments, which he believes were carried out within relaxed biosecurity environments which led to a lab leak at the US-funded Wuhan Institute of Virology.

‘EcoHealth Alliance and foreign laboratories did not have the adequate control measures in place for ensuring proper biosafety, biosecurity, and risk management, ultimately resulting in the lab leak at the Wuhan Institute of Virology,’ he said.

The army veteran, from Michigan, said the organization taught the Wuhan lab the ‘best existing methods to engineer bat coronaviruses to attack other species’ for many years.

‘China knew from day one that this was a genetically engineered agent,’ he said.

‘I was terrified by what I saw. We were just handing them bioweapon technology.’

In his book, the infectious diseases expert claims ‘greedy scientists killed millions of people globally,’ and goes as far as to claim the US government covered it all up.

Huff said that it shouldn’t be a surprise that China lied about the outbreak and then went to ‘extraordinary lengths to make it appear as if the disease emerged naturally.’

‘The shocking part of all of this is how the United States government lied to all of us,’ he said.

In September, Anthony Fauci, who has spent over five decades in the federal government and has been the face of the coronavirus pandemic response, awarded EcoHealth more money.

The organization received a $653,392 grant to analyze ‘the potential for future bat coronavirus emergence in Myanmar, Laos and Vietnam,’ according to the Wall Street Journal.

NIH have identified the region as ‘high risk for future emergence of novel coronaviruses and the potential site where SARS-CoV-2 first ‘spilled over’ from bats to people.’

While the NIH is promoting EcoHealth Alliance’s claim that Covid-19 emerged through a ‘spill over’ from animals.

Many scientists disagree and have said the circumstantial and biological evidence suggests a lab leak.

Huff, who worked at EcoHealth Alliance from 2014 to 2016, serving as vice president from 2015, said he worked on the classified side of the research program as a US government scientist.

Former intelligence chiefs and diplomats have already claimed Covid was leaked from a Wuhan lab in the ‘cover-up of the century.’

‘People are for some reason bent on insisting on having a slam-dunk, air-tight case that China produced this virus,’ he said at the time.

‘Of course, the PRC is not going to let you in there to see their labs, but so many people have used that problem to stop further inquiry.

‘This isn’t a legal case, we are not looking for indisputable evidence; there is enough circumstantial evidence.’

In 2019, the Wuhan lab started working with the EcoHealth Alliance on a USAID program called PREDICT, which focuses on emerging pandemic threats.

PREDICT had been designed to detect and find zoonotic viruses with pandemic potential – including coronaviruses.

EcoHealth Alliance states on their website that zoonotic diseases–those that can be transmitted between animals and humans–represent approximately 75 percent of the newly emerging diseases currently affecting people.

Shi Zhengli, the Wuhan virologist who famously became known as ‘Batwoman’ had hoped the program would create an early-warning system for pandemics.

But in 2014, Huff was asked to review a funding proposal which revealed that GOF work was being carried out to create SARS-CoV-2 – which causes Covid.

During a meeting with top executives in 2015 and 2016 Huff claims that he tried to sound the alarm over the biosafety and biosecurity risks in contract labs.

Huff said US government officials again issued warnings in January 2018 about the Wuhan lab – including the major shortage of experts needed to safely manage research on deadly coronaviruses.

‘It could be reasonably argued that EcoHealth Alliance set up China to fail,’ he said.

The risky research method can pose safety and security concerns – and is banned in many countries.

Huff realized the EcoHealth Alliance was working closely with the Wuhan lab on this type of research, with the support of USAID – a US government department.

He claims that the virus would never occur in nature and had been developed into a much more powerful pathogen in the lab.

‘EcoHealth Alliance developed SARS-CoV-2 and was responsible for the development of the agent SARS-CoV-2 during my employment at the organization,’ he said.

He said that he has no evidence China deliberately released the virus but believes the US-funded project was ‘mostly a global fishing expedition for coronaviruses’ to carry out GOF work or for intelligence collection – rather than preventing future pandemics.

‘At the time, I felt like the project seemed more like intelligence collection than scientific research and development,’ he said in his book.

The scientist said the PREDICT program wasn’t collecting the data it should have been and Huff told The Sun that it appeared to be a ‘giant intelligence operation’.

Huff said he believes that the US government was alerted to the outbreak in August or October of 2019 months before the first clusters were starting to emerge.He quit EcoHealth Alliance in 2016 ‘due to a large number of ethical concerns with the scientific work and EcoHealth Alliance as a whole.’

But in late 2019, he was suddenly offered a position at Defense Advanced Research Projects Agency (DARPA) – and was told he would need top security clearance and a polygraph for the job.

Huff now believes he was approached for the role to keep him quiet about the origins of Covid.

‘It is my belief that people working within the US government potentially identified me as a risk to knowing first-hand that the SARS-CoV-2 disease emergence event was a consequence of the US government’s sponsorship of the genetic engineering of SARS-CoV-2 domestically and abroad,’ he said in his book.

‘If I would have accepted the position, then I suspect that DARPA would have disclosed restricted information to me, which would have consequently prevented me from discussing any of this information publicly, like I have been and am doing now.’

About a month after the pandemic began in the early months of 2020, Huff said he was ‘adamant that SARS-CoV-2 was a manmade agent.’

‘I suddenly realized what the potential motivation and persistence for recruiting me were,’ he said.

‘The intelligence community realized that I was the only person in a senior position that had left EHA, and the fact I was working outside the government’s control made me a threat to their agenda.’

Huff believes government officials offered him the role so he could be ‘sworn into silence for the rest of my life.’As he began to unravel the alleged cover-up by the US government, he claims that authorities have launched a massive campaign of harassment against him.

He claimed military-grade drones would often appear at his home, he was stalked at the supermarket, and he was followed by unknown vehicles.

Huff has since filed a lawsuit with Renz Law LLC against EcoHealth Alliance in the state of New York.

In September, Huff tweeted: ‘Below is link to the copy of the report about the REAL Origin of SARS-CoV2 sent to the US Senate and Congress.

‘My declaration in the document was provided under oath with penalty of perjury.’

‘As early as later April or early May 2020 former President Trump spoke of the creation of SARS-CoV-2 in a lab in Wuhan, China.

‘Since that time both the investigation and the cover-up have continued but the evidence provided herein clearly demonstrates that SARS-CoV-2 was indeed created in a lab in Wuhan China by EcoHealth Alliance and with funding from Anthony Fauci’s NIH/NIAID.

The document goes on to say that the evidence gathered hopes to back five statements of claim.

It goes on to say that the expectations are that there will be a ‘immediate investigation that will see bi-partisan support in light of this newly compiled information.’

‘Renz Law and Make Americans Free Again (MAFA) will provide any and all support possible in such an investigation and prosecutions,’ the document continues.

‘Further, with the additional high-profile revelations that certain segments of the government have promoted censoring this information, presumably as part of the cover up, we will voluntarily support any good faith efforts by the media to correct the record.

‘[We] will continue to seek truth and justice in this matter for all that have been impacted by the worst man-made pandemic in human history.’

Huff provided a declaration alongside the documents stating that he would attest a true and accurate representation of facts and experiences.

In October, DailyMail.com revealed that EcoHealth Alliance had been handed nearly $7 million in taxpayer’s money during the pandemic.

Official records show EcoHealth Alliance has received seven grants from the NIH since June 2020 for research into animal-borne viruses in Asia and Africa.

Four of those grants were handed to the non-profit after it was uncovered EcoHealth Alliance channeled funds to the Chinese laboratory in Wuhan, the epicenter of the pandemic.

It also collaborated on controversial virus-tinkering research at the Wuhan Institute of Virology, which some scientists fear led to the Covid crisis.

Dr Peter Daszak, a British zoologist who was accused of trying to cover-up serious inquiry into the so-called lab leak theory, is listed as the project lead on a majority of the research programs.

‘They should be held to account and not be receiving taxpayers’ dollars until a full investigation is complete.’…[ ]

Read the rest of the article HERE