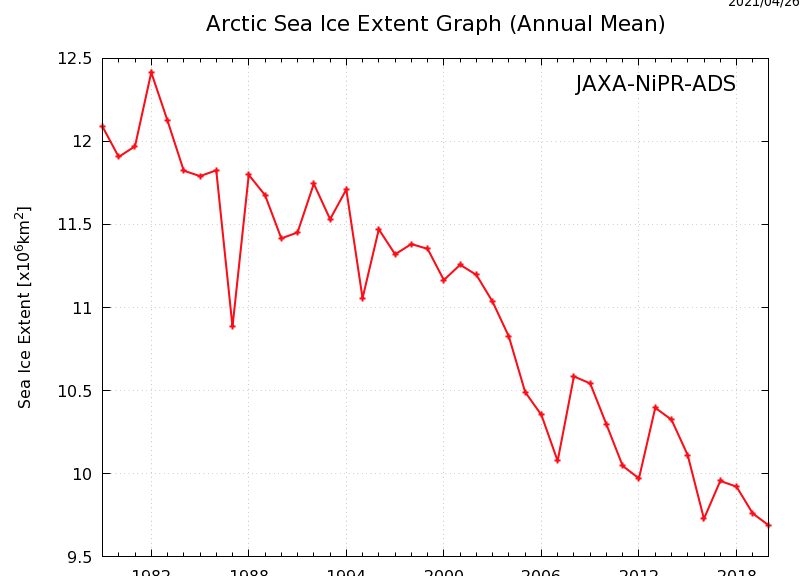 I think I have found a good fellow traveller for those who think that melting of the Arctic ice is a myth and we are headed into an Ice Age.

The difference is that the Ice Age folk are merely ignorant.

Kathryn Hansen IS NOT. 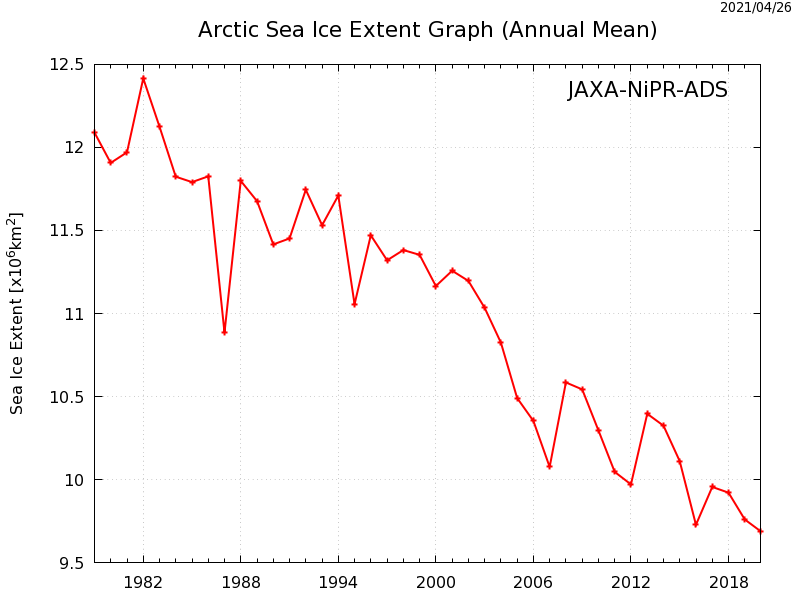 NASA’s Kathryn Hansen at NASA Earth Observatory yesterday wrote an article for SciTechDaily, in which she made the above mentioned counterfactual claim, as well as presented polar ice graphics giving the impression that there’s been a vast rebound of Arctic ice. Hansen clearly didn’t feel like showing the sharp decline in sea ice over the satellite record, and rather presented the happier image of ice growing back over the winter.

We hope she is roundly compensated for her activistic stunt journalism. There were no records set in 2020-21, but the downward trends in polar ice continue.

The amount of sea ice around Earth’s poles waxes and wanes with the seasons, melting through spring and summer and growing through fall and winter. In recent decades, there has been more waning than waxing, as polar sea ice has mostly been in a long-term decline since the start of the satellite record in the 1970s. The maps on this page represent the most recent snapshots of those annual highs and lows.

“The 2020-2021 Arctic data further confirm that the Arctic sea ice coverage is well below what it had been in the 1970s and 1980s,” said Claire Parkinson, a sea ice scientist at NASA’s Goddard Space Flight Center. “The 2020–2021 Antarctic data reveal an ice cover that has rebounded somewhat from its 2017 record low but is nowhere close to growing back to its much greater 2014 ice coverage.”

The maps above show the average Arctic sea ice extent for September 2020 (left) and March 2021 (right), the months in which the region reaches its annual minimum and maximum ice extents. Sea ice extent is defined as the total area in which the ice concentration is at least 15 percent.

When Arctic sea ice reached its minimum extent on September 15, 2020, it spanned just 3.74 million square kilometers (1.44 million square miles)—the second-lowest minimum since the start of the satellite record in 1979. In recent decades, Arctic melting seasons have been growing longer and much of the older, thicker ice has been lost.

Some Arctic marginal seas fared worse than others. In the Labrador Sea, sparse sea ice cover during the winter posed challenges for Inuit people, disrupting some ice highways that connect communities in the region. In the Gulf of Saint Lawrence, the lack of sea ice led seal pups to cluster onshore, where they were more vulnerable to predators. Sea ice around Antarctica has been variable lately. Since the start of the satellite record in the late 1970s, seasonal ice cover increased gradually and peaked at a record high in 2014. The next few years showed a rapid decline, wiping out decades of increases. There have been small rebounds in recent years, but nowhere near the record high.