I was alerted to this information (although I have no idea

story of the Military Games in Wuhan, China.

Was
“patient one” a Dutch-

American cyclist who was at

the Military
Games in

This is an audio extract from “Stranger than Fiction News”

Here is some background to this story

“Made in China” or “Made in 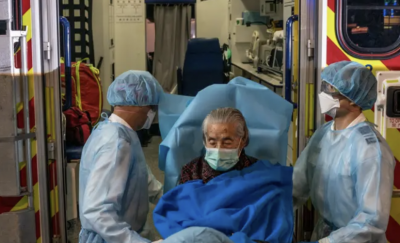 Trump contends that the coronavirus was “Made in China”.  And that China threatens America.

The president of the US wants Americans to believe that the coronavirus pandemic carries the “Made in China” label.

Secretary of State Mike Pompeo refers to it as the “Wuhan coronavirus.”

“The Big Lie” started on January 30th when the WHO Director General pressured by powerful US economic interests declared a global public health emergency with only 150 “confirmed cases” (by the WHO) outside China with only six cases in the USA. And it was called a pandemic.

On the following day (January 31, 2020), Trump announced that he would deny entry to the US of both Chinese and foreign nationals “who have traveled in China in the last 14 days”. This immediately triggered a crisis in air travel,  transportation, US-China business relations as well as freight and shipping transactions.

While the “Made in China” coronavirus label served as a pretext, the unspoken objective was to bring the Chinese economy to its knees.

It was an act of “economic warfare”, which has contributed to undermining both China’s  economy as well as that of  most Western countries (allies of the US), leading to a wave of bankruptcies, not to mention unemployment, collapse of the tourist industry,  etc.

Moreover, Trump’s “Made in China” coronavirus label almost immediately as of early February triggered a campaign against ethnic Chinese throughout the Western World.

On March 11, a new phase was launched. The Trump administration imposed a 30-day ban on Europeans entering the United States through the suspension of air-travel with the EU (with the exception of Britain).

America is now waging its “economic  war” against Western Europe, while using COVID-19 as a justification.

European governments have been co-opted. In Italy a lockdown prevails, ordered by the Prime Minister, large cities in Northern Italy including Milano and Torino have literally closed down.

It’s “Damage Made in America”.

The stock value of airlines companies collapses overnight. Those who had  “foreknowledge” of Trump’s March 11 decision to ban transatlantic flights from EU countries made a bundle of money. It’s called “short-selling” in the derivative market among other speculative ops. Institutional speculators including hedge funds with “inside info” had already placed their bets.

More generally, a massive transfer of money wealth has occurred, among the largest in World history, leading to countless bankruptcies, not to mention the loss of lifelong savings engineered through the collapse of financial markets.

This process is ongoing. It would be naive to believe that these occurrences are spontaneous, based on market forces. They are deliberate. They are part of a carefully designed plan involving powerful financial interests.

And now a new bombshell has emerged: The White House rhetoric of accusing China of spreading the “Wuhan virus” Worldwide has been refuted by both Japanese and Chinese reports. Scientific analysis revealed by Larry Romanoff  suggests that the virus was “Made in America”:

“it appears that the virus did not originate in China and, according to reports in Japanese and other media, may have originated in the US.  …

In February, the Japanese Asahi news report (print and TV) claimed the coronavirus originated in the US, not in China, and that some (or many) of the 14,000 American deaths attributed to influenza may have in fact have resulted from the coronavirus. 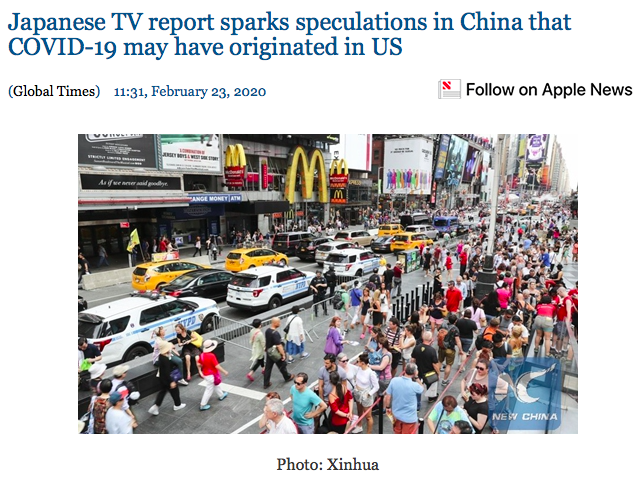 And on March 12, in a statement to the US Congress (House Oversight Committee), CDC Director Robert Redfield unwittingly “spilled the beans”. He candidly admitted, yes, some cases diagnosed as seasonal flu could have been coronavirus.

When did this occur? In October, November? What is the chronology.  It is worth noting that Redfield’s statement is corroborated by both Japanese and Taiwanese virologists.  Two countries which are staunch allies of the USA.

CDC director Robert Redfield admitted some Americans who seemingly died from influenza were tested positive for novel #coronavirus in the posthumous diagnosis, during the House Oversight Committee Wednesday. #COVID19 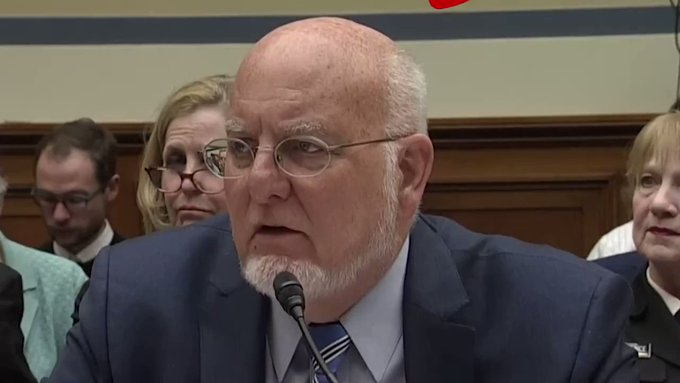 It is worth noting that the Taiwan virologist (referred to above)

“stated that the US has recently [?] had more than 200 “pulmonary fibrosis” cases that resulted in death due to patients’ inability to breathe, … He said he .. informed the US health authorities to consider seriously those deaths as resulting from the coronavirus, … [He] then stated the virus outbreak may have begun earlier than assumed, suggesting  “We must look to September of 2019”. (quoted in Larry Romanoff, op cit)

China’s Foreign Ministry has reacted to CDC Robert Redfield’s statements intimating that the virus could have originated in the US.

“When Did “Patient Zero” Begin in the US?” said China’s Foreign Ministry spokesperson Zhao Lijian.

Of course “WHEN” is the fundamental question.

“How many people are infected, what are the names of the hospitals, It might be US Army that brought epidemic to Wuhan. Be transparent, US owe us an explanation”

@CDCDirector Dr. Robert Redfield: Some cases that were previously diagnosed as Flu in the US were actually #COVID19. It is absolutely WRONG and INAPPROPRIATE to call this the Chinese coronavirus. https://www.c-span.org/video/?c4860650/user-clip-diagnosed-flu-covid-19 …

People Worldwide are being misled. They are told: “It’s going to get worse”. Angela Merkel has stated without a shred of evidence that “70% of the German population could contract coronavirus if more isn’t done to stop its spread.”

In several countries, the economy has closed down. Supermarkets, shopping malls, offices, factories, schools, universities are at a standstill. People are confined to their homes. Fear and intimidation prevail.

In the meantime, coinciding with the coronavirus lockdown in Italy, 30,000 US troops have been dispatched to the EU, under US-NATO’s  “Defend Europe 2020” war games against Russia, in the largest military deployment since World War II. “Could the Defender become the Invader…?”

Let’s be clear: The coronavirus pandemic is not the “cause” of this unfolding economic and social crisis. It is the “pretext” for the implementation of a carefully designed “operation” (supported by media disinformation) which destabilizes national economies, impoverishes large sectors of the World population and literally undermines the lives of millions of people. What we are dealing with is “An Act of War”.

While COVID-19 is an important Public Health concern, the lockdown coupled with an ongoing fear campaign does not constitute an effective means to combating the virus, i.e. by providing target medical assistance and health services to those affected.

One thought on “Who was coronavirus Patient One?”